The Wild Dolphin Project was started by Dr. Denise Herzing back in 1985. Since then Dr. Herzing, along with her colleagues and graduate students, put out multiple peer reviewed research papers on the behavior, acoustics, and ecology of the two species we study in the Bahamas. Over the years she has observed behaviors that are more “rare” or are “one-offs” meaning there is not a large enough sample size in which to do a proper scientific study. However, these behaviors are still very interesting and hopefully you enjoy learning about them. Be sure to check out all of the blogs in this rare behavior series (Can anyone hear me, Pesky Remoras, Bottom Behavior, Bubbles, Synchrony, Hunting).

What’s for Dinner and How are We Going to Catch It?

Atlantic spotted dolphins (Stenella frontalis) in the Bahamas eat a variety of prey items. They eat halfbeaks, eels, flounders, jacks, lizardfish, needlefish, and razorfish during the day and have been known to go off the deep ledge at night to feed on flying fish and squid (Malinowski, 2011; Herzing & Elliser, 2014). This blog focuses on different prey items and hunting strategies we’ve observed.

Photo of a needlefish by Paul Harrison copyright license CC BY-SA 4.0 . This image shows how easily the needlefish can blend into the water at the surface. 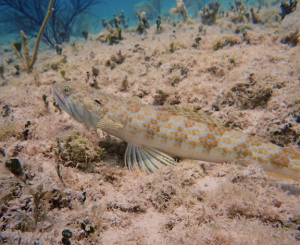 Photo of a lizardfish taken by Research Assistant Cassie Volker-Rusche while snorkeling in the Bahamas.

In this video clip of a razorfish, filmed by our Board of Directors Vice President Drew Mayer, a razorfish comes up from the sand to swim around. After that fish leaves the frame, you’ll see others begin swimming close to the sand in the background.

When the spotted dolphins are young and first start to learn to forage for food, they begin by trying to catch flounder because these fish are the easiest to catch. WDP also learned that mothers teach their calves how to find food. When the mothers are in the presence of their calves they spend more time chasing prey and they make significantly more referential body-orienting movements in the direction of the prey (Bender et al., 2008).

During the night feeding we hear the dolphins using their echolocation a lot. Take a listen! In this video clip a flying fish gets snagged by a dolphin towards the end of the clip.

Even though we think the night-time feeding is their main source of food, we have seen the spotted dolphins foraging throughout the day. The daytime foraging we have observed usually occurs during encounters where other behaviors are going on. So it seems that finding food is not the priority, but they aren’t going to pass up an opportunity for an easy snack!

When the spotted dolphins are foraging in the day-time for fish on the bottom, they are close to the seafloor and using their echolocation. Once they find something they want to eat, they dig into the sand with their rostrums and try to locate the fish hiding underneath. Sometimes when they are hunting snakefish specifically, we have observed them bop their rostrums on the sandy bottom to cause the fish to come out of hiding. Another foraging strategy we have seen the spotted dolphins use during the day is going inverted under the surface to hunt needlefish. Dolphins have some of their best vision beneath their head because their visual field overlaps in this area (Dral, 1975).  In the Bahamas, the spotted dolphins chase and hunt needlefish under the surface of the water by swimming in an inverted posture, presumably to get the best visual look at their prey.  Initially, a dolphin swims right-side-up with their heads cocked slightly up and scanning, eventually turning inverted before catching a fish. Needlefish are silver colored and blend in very well with the water at the surface, so the dolphins need the best view possible to help them hunt the needlefish that are basically camouflaged against the surface.

In this video clip, an older fused male spotted dolphin uses his rostrum to bop along the bottom, quickly scooping up fish. 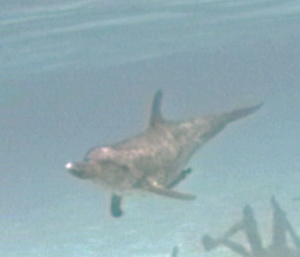 The image shows the spotted dolphin swimming right side up with head slightly cocked towards the surface.

The image shows the spotted dolphins swimming inverted and the needlefish at the surface.

In this video clip of the spotted dolphins hunting needlefish, if you look closely you will see the needlefish right under the surface.

This video clip is a rare dense foraging event. All of the dolphins are grouped up together on the bottom. We dove down to get some footage from the sea floor, check it out!

Lastly, there have also been a few rare cases of the dolphins feeding in bait balls at the surface. Bait balls are groups of small fish swimming tightly together. During these events the dolphins seem to blow bubbles to scare the fish into tighter groups for easier grabbing as the dolphins zoom through the ball of fish. Bait balls are known to occur on a large scale out in the deep ocean where a lot of different animals come to feast. The few we have observed on the Bahamas shallow sandbanks were of smaller scale, but still very cool to witness.

This video clip shows the spotted dolphins feeding on blue runners from a bait ball.

Your ticket for the: Hunting