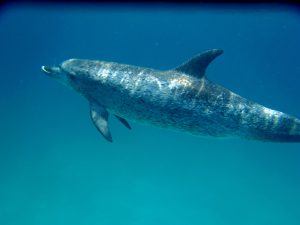 Identification Marks: Strong under bite, and a small nick in upper trailing edge of dorsal fin

Brush is one of our friendly adults, and was first observed in 1990 with her mother, Paint. She is a fused female of the northern group, with multiple offspring over the years – Burgundy, Bebe, Button, Brat, and her newest calf, Butter. Brush became a grandmother in 2016, with the birth of Bueno!

Brush is a wonderful example of the wealth of information WDP can gain through our long-term research. We were able to follow her throughout her life, documenting life history characteristics, social roles, associations, and how they change over time. Brush is still an important individual in the population and our study, and we look forward to what we can still learn from her! 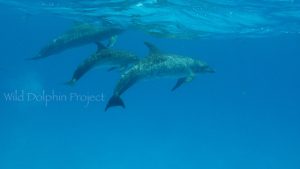 Bueno is a two-tone, which makes him a little more difficult to identify based on body marks. Once we get some better identification photos of him, we may find he has unique coloration in certain areas. Otherwise, he will develop his own unique marks over time. For now he is easily identified by his position at his mother's side.

Burgundy is the first offspring of Brush. She is a part of the original Northern group, though she is one of the dolphins who relocated to Bimini in 2013. She is of the mottled age class, which means she is in the first stage of her reproductive years. In 2016, Burgundy gave birth to WDP’s FIRST 4th generation calf, Bueno! Calves like Bueno will associate highly with their mothers for the first few years of their life. They will nurse for 3-4 years. This happens many times a day, and then decreases once they start eating fish in year 2. At this time the calves are observing their mother and others in the society, learning the necessary skills for survival, such as foraging, predator detection, and social behaviors. There is also much playtime, where mothers and calves are often seen together, letting the calves play together. Play is an important learning tool for young dolphins. 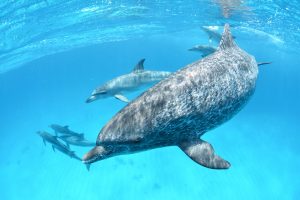 Identification Marks: Tip split and two large notches in trailing edge of right pectoral fin, one at center, and another next to it on the distal side (often referred to as “her Batman symbol”), in 2001, she also received a split wound at the tip of her left pectoral fin.

Venus is a very friendly dolphin, often zooming in front of you and hogging the camera. As she grew up, she became a babysitter, learning how to take care of young calves, before giving birth to her own calves. She is now of the fused age class, and is a seasoned mother and grandmother. Her offspring consist of Violet, Vega, Viper, Val, and Venti. Venus was first seen in 1992 and is a part of the Southern group of animals. 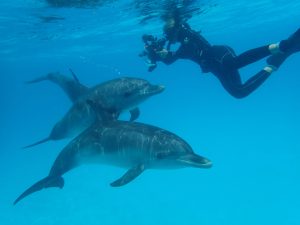 Tristan and Palette are listed together, as they are the best of friends! These two female speckleds are always together – at this age, dolphins are often found with others their age. As they grow up, female juveniles will learn to become babysitters, and in turn mothers. Their social relationships may alter with their reproductive ages. We will see if they remain close friends over the years!

Tristan and Palette are WDP’s favorite pair to work with for the two-way work. They love to play with the toys that we provide, and can be found snatching a scarf or some sargassum from your reach in a game of keep away. 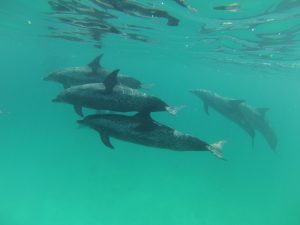 Mystery, Poindexter, and Navel are listed together as an example of a male alliance, or coalition. Male dolphins form strong, long-term associations with other males, which often extend throughout their lifetime. Mystery, Poindexter, and Navel are fused males of the Central group. Poindexter was first seen in 1986, followed by Mystery in 1987, and Navel in 1991. They are three of the dolphins that migrated to Bimini waters in 2013, but have now returned to Little Bahama Bank as of 2016. 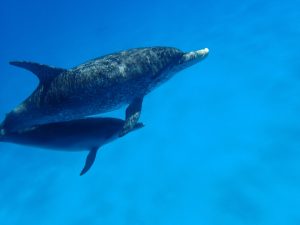 Identification Marks: Nebula has an extreme under bite, as well as a rough trailing edge of her dorsal fin. Ninja has good throat marks.

Nebula and Ninja are a mother/calf pair in our Bimini field site. Ninja was born in 2015, making her a two-tone. We will see Ninja alongside Nebula for the next few years, as calves associate highly with their mother’s for the first few years of their lives. Nebula is of the fused age class, and is also the mother of Nova, a now speckled female. Nebula is often seen with other females of her age, such as Queen B, Smokey, and Aquarius, as well as a few slightly younger, mottled females, such as Mira, Duchess, and Denali. 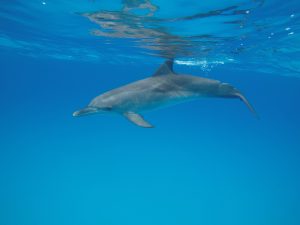 Lettice is a speckled male in our Bimini field site. His mother is Duchess, a mottled female. Lettice is not shy, as he is seen very often, and is easy to recognize with his two gashes in his peduncle, along with the scar that wraps from one of the gashes all the way around his peduncle. These types of gashes are not uncommon in our study population and are often the result of shark bites, fishing line entanglements, boat propellers and dolphin aggression. 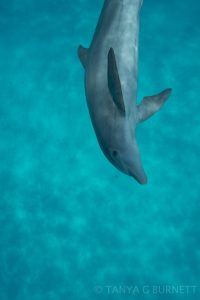 Identification Marks: Small nick on leading edge of dorsal fin at the tip, small nicks on trailing edge of dorsal fin, and two larger notches near the base. In 2007 he gained a new mark – a large gash in his peduncle near the fluke. He also has dark marks on both sides of his flank, where the color turns from darker to lighter grey on the belly.

Nightmare was first seen in 2003. He is the son of a dolphin named Natasha. Nightmare followed in his mother’s fluke steps and is very comfortable with us in the water, although he has a bit of a spunky, sometimes intimidating, personality. He is most frequently seen with his pal, Scribble, another male bottlenose dolphin. 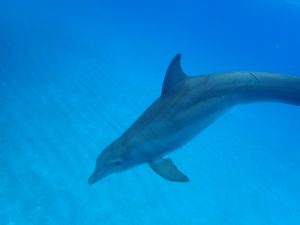 Identification Marks: Small nick in upper portion of dorsal fin, new scars behind dorsal fin on peduncle as of 2016

Koala is a friendly female bottlenose, who likes to swoop in and say “Hi!” during a snorkel break or during an encounter. She was first seen in 2012, and is most often seen with another female bottlenose named Bell, but can be found hanging out with a wide variety of dolphins.

Your ticket for the: Meet the Dolphins