CHAT (Cetacean Hearing and Telemetry) is an underwater computer designed by Dr. Thad Starner and his team at Georgia Tech. CHAT receives sounds via two hydrophones, and produces sounds through an underwater speaker. The Wild Dolphin Project, under the direction of Dr. Denise Herzing and with the help of colleagues Dr. Adam Pack and Dr. Fabienne Delfour, created a few basic artificial sounds, specifically whistles (outside of the dolphins natural repertoire) to label a few play objects (Sargassum – a natural play toy, scarf, and rope – toys that humans bring in the water).
Denise and CHAT

From past studies we know that dolphins can easily mimic whistles, both in captivity and sometimes spontaneously in the wild. We also know that dolphins can learn to associate sounds (whistles) with objects. The hallmark of referential communication is to talk about, or refer to, something out of time or space by labeling it. Chimpanzee researchers used a physical keyboard to represent words that allowed Kanzi to see visual images and trigger the keyboard by touching. Alex, the African Grey Parrot, could both see objects and use English words to communicate (since parrots have the vocal ability to mimic words). Specially trained service dogs can now use bite plates and other mouth-able devices to communicate back to their humans in some detail (FIDO project).

But how do you create a tool that is dolphin friendly? It is difficult and no doubt one of the reasons that we haven't had much progress using these tools with dolphins, the interfaces simply have not been very dolphin friendly. Dolphins, like chimpanzees, don't have the ability to produce detailed human words like Alex. And unlike chimpanzees, dolphins don't have primate-like appendages to touch a keyboard. Well, they have their rostrums that they can use in captivity to trigger a keyboard, but in the wild they do not normally touch strange objects. In the late 1990's the Epcot Center in Orlando had the first underwater keyboard that humans and dolphins used together, semi successfully, although the work has yet to be published in detail.

What dolphins CAN do in the wild is mimic sounds, and we are banking on their ability to mimic sounds from CHAT and learn the functional use of these whistle mimics when interacting with researchers in the water. And we know that dolphins have names called signature whistles, which essentially is a label for an individual and can be thought of as an example of a referential signal. They can also call their friend over by their name, or whistle.

When CHAT is in the water it has a small set of pre programmed sounds that it can recognize. Each of these sounds (whistles) goes out into the water as a whistle and into the diver's ear as a word (in a male voice). Since humans are not good at discriminating between whistles in the water this is to clarify to the diver which sound they sent out. And when an incoming signal matches one of the "whistle words" programmed in the computer, the diver also hears an English word (in a female voice). This is the only "translation" that happens…From computer whistle to human word, mostly for the convenience and accuracy of diver response.

As it happened in August I was in the water when I heard the "word" sargassum in my bone-conducting headphone, meaning essentially that the computer system heard and recognized the incoming whistle for sargassum and was triggered to say the word "sargassum" in my ear. Since there was not, at this time, a second CHAT box in the water the only explanation is that a dolphin made the whistle that triggered the word in my ear. Again, this is not to say that a dolphin knew what it was saying when it put out this whistle. It may simply be that the dolphin was mimicking this whistle or that the computer heard a close approximation to "sargassum" and triggered. Since we had rigorously tested CHAT and its abilities, it was both exciting and confirmatory. And although the dolphins had previously been playing with sargassum with each other, at the time of the trigger they were going about normal dolphin business. So although I heard a potential mimic, there was nothing to indicate that this "word" was used in context. Through the summer we had other whistles that "sounded" by ear that they were mimics but did not trigger the computer for a match. But as we reviewed the data this winter, it appeared that many whistles did look like mimics but were placed, by the dolphins, in a higher frequency range, one that the system was not designed to hear (dolphins have been known to jump octaves or adjust for background noise). So, as we approach the summer of 2015 our priority is to increase "our" hearing range via the computer, and spend more time in the water exposing the dolphins to a few of these signals and see what they might do.

Phase II research involves the development of a two-way communication system between the dolphins and humans.  From 1997 to 2000 we piloted the use of an underwater keyboard with our wild spotted dolphins, attempting to bridge the gap.  Although this was successful on some levels, we have been in need of a better system.  In the fall of 2010 we relaunched this project.  Joining forces with Georgia Tech in Atlanta, we are developing state-of-the-art technology specifically designed for this application.

Dr. Thad Starner and his students are creating a high-tech, dolphin- and human-friendly diver system to restart the exploration of a new interface in the wild. In addition, pattern recognition software is being developed to help us categorize and decode the dolphins' natural sounds.

We are excited about the potential for this new technology as a tool for exploring dolphin cognition and communication in the wild.  Since communication is a part of cognition, this is a long-term endeavor and this summer is only the preliminary step to explore this potential interface for two way work.

Why conduct this work?  Dolphins represent a superior non-human animal for cognitive work due to their advanced brains and sophisticated societies.  Discoveries in dolphin cognition will serve to further elevate the status of all animals on the planet, and help us define our relationship with them.  Knowing that dolphins have a complex communication system, it stands to reason that understanding it will involve many factors besides the sounds they make, including their environment, their behavior, their body posture, and their spatial and social associations.  This work holds the ability to "bridge the gap" and transcend the artificial boundaries between non-human animals and humans with the establishment of a mutually comprehensive communication system. 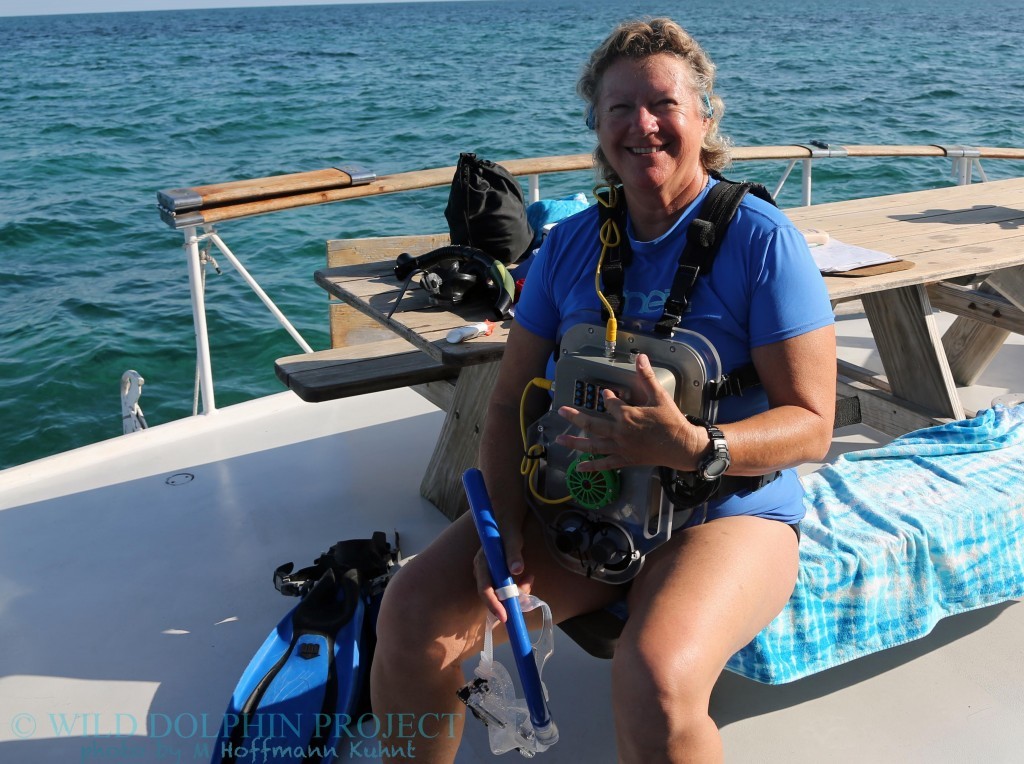 Dr. Herzing tests her CHAT box before entering the water. CHAT is made up of an underwater speaker (green), two hydrophones (bottom), and a keypad (top) that triggers output of a sound in the water. The diver also wears a headset that confirms, via the computer inside, which sound was transmitted or if a sound was received. 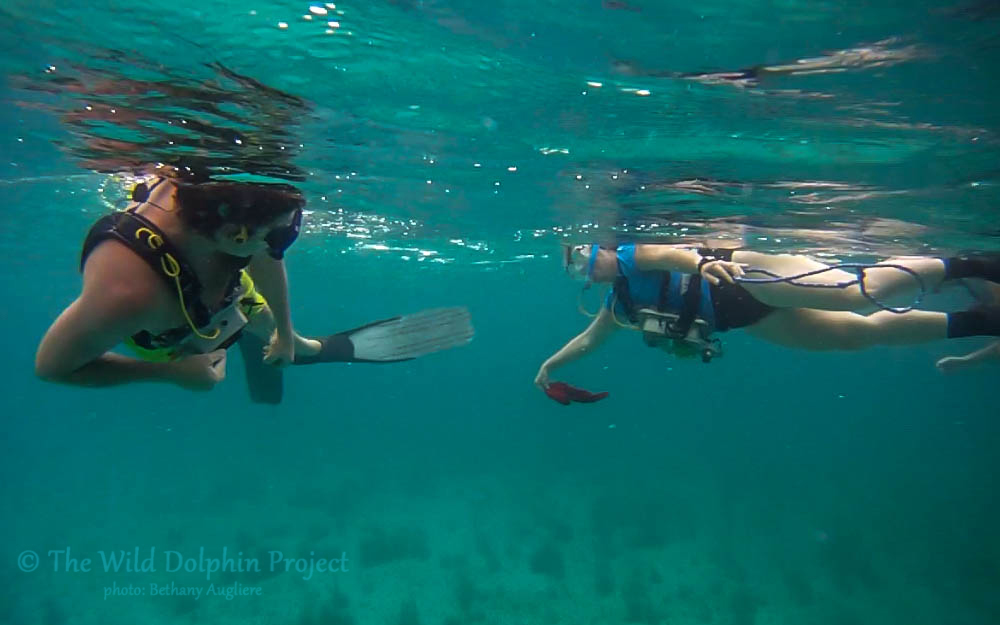 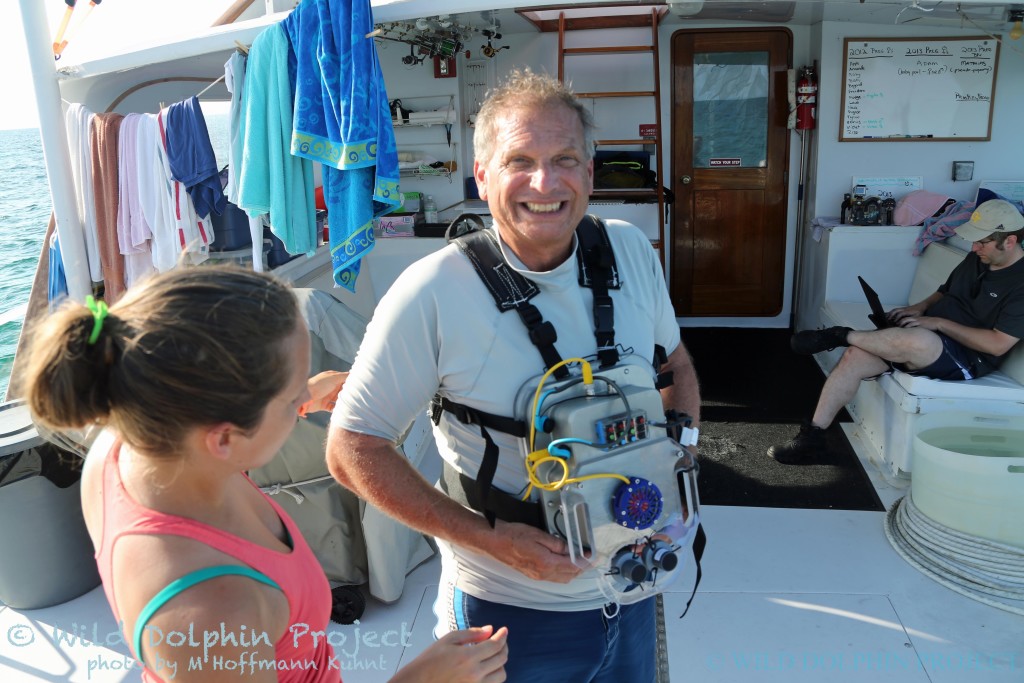 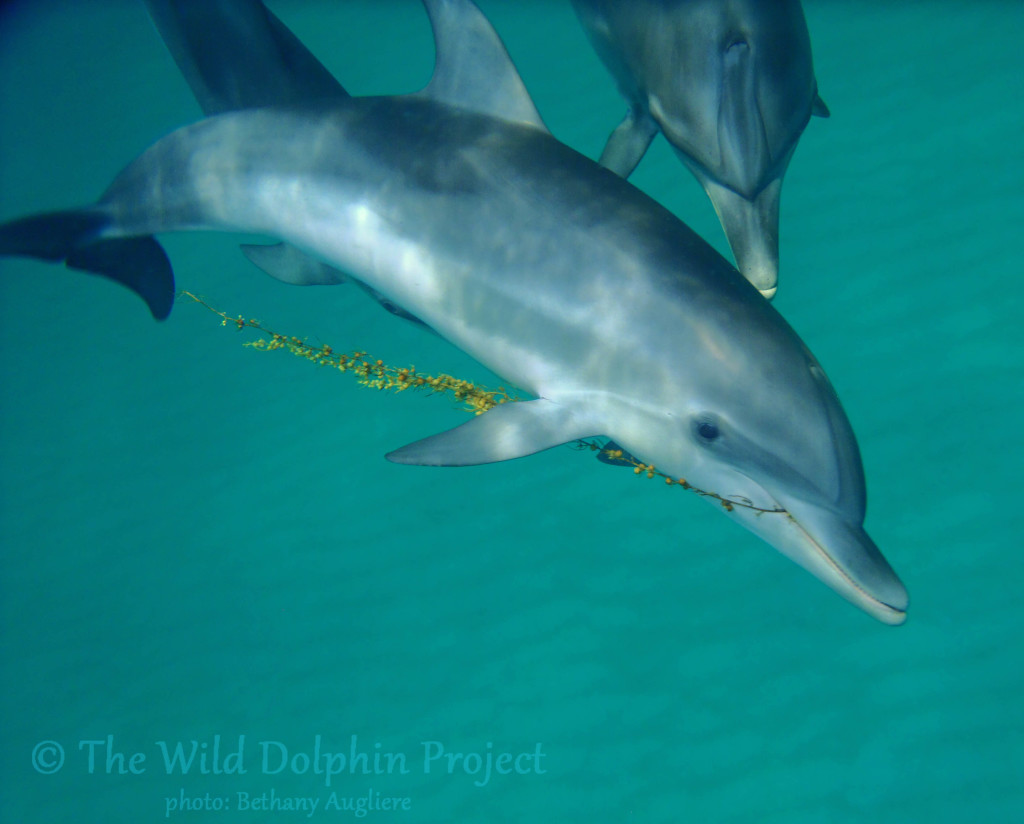 A young calf plays with sargassum (a type of brown algae), a natural toy for Atlantic spotted dolphins (Stenella frontalis). 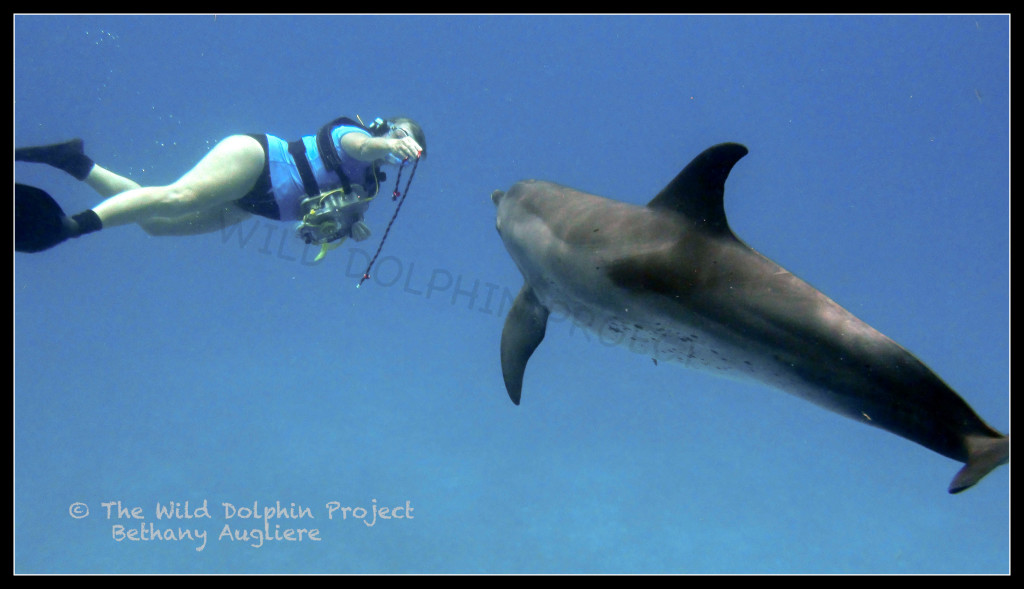 Your ticket for the: CHAT Research