Our Non Invasive Approach – In Their World, On Their Terms

Wild Dolphin Project uses a unique, non-invasive model to study two communities of free-ranging dolphins in the Bahamas. WDP emphasizes the importance of observing and interacting with these animals in a “hands-off” approach. This method has gained the trust of the animals, allowing researchers to observe and document them in their natural environment. These observations are carefully and methodically are recorded into a large database, which contains over 30 years (4-generations of dolphins) of data.

Wild Dolphin Project continues the long-term tracking of a community of Atlantic spotted dolphins and bottlenose dolphins who reside off the coast of the Bahamas. We use surface and underwater photography to identify individual dolphins. Every field season known dolphins are re-identified, new dolphins including calves and immigrants are identified, and the losses of animals are documented as well. Reproductive and health status, and social associations, are also monitored every field season.

We collect fecal samples in the water for our genetic work. Extracting DNA from these samples illuminates paternity, relatedness of the spotted dolphins, and potential hybridization between spotted and bottlenose dolphins. This non-invasive technique has given us enough data to determine paternity, identify grandfathers in the community, and assess sexual maturity in males. This also allows us to verify maternal lines that are initially based on visual observations of mothers with calves.

In order to identify environmental or climate impacts, WDP continues to monitor habitat and distribution changes of these resident dolphins. Climate change continues to have large implications for the conservation of local communities as well as whole populations of cetaceans. In 2013 a major shift occurred in the communities of dolphins, creating a mass exodus from their former habitat. WDP has committed to monitoring and tracking this community as they live in two different locations. We are also exploring oceanographic features that may have influenced this move, and how they are shaping the Bahamas environment. Information about abundance, distribution and residency of the species present will greatly affect and improve the conservation measures that are used on this species.

Dolphin communication data are obtained during dolphin encounters using audio/video recording devices. The Bahamas was chosen initially because of its clear and safe waters and accessible dolphins, since in most parts of the world, researchers simply cannot see underwater.

It’s important to correlate sounds with behaviors to understand the dynamics of mating and courtship, nursing, juvenile aggression, pectoral fin rubbing, crater feeding, playing and fighting, and interspecies interactions. Regular observations of social interactions between the Atlantic spotted and bottlenose dolphins, two closely related and sympatric species, illuminate how two neighboring cultures live together. In addition, we can correlate sound and behavior with age classes, sexes, and document the process of development of communication in dolphins.

Because of the digital revolution we are now able to record the ultrasonic sounds of dolphins, previously inaccessible with old video units. With our underwater video dataset of acoustic, postural, and visual signals of three generations of dolphins we are situated to crack the code of dolphin communication. WDP continues to collaborate with a team at Georgia Tech to develop pattern recognition software designed for unique pattern discovery in dolphin sounds.

Although WDP is primarily a research organization, we understand the importance of educating the next generation of guardians and scientists on the planet. We mentor graduate students in various studies and WDP publishes its work in peer-reviewed scientific journals. We have also presented our work at national and international scientific conferences over the decades.

Researchers from WDP also present local, national, and international lectures to schools, clubs, and organizations educating the scientific, public, and private sectors with the project’s findings regarding the Atlantic spotted and bottlenose dolphins in the wild.

WDP continues the advancement of our internship program, which was initiated in the summer of 2011. This program is designed to train young students (upper high school and under graduate level) in the field of marine mammal conservation. Each intern is fully involved in daily activities including: dolphin watches, photography of dorsal fins and body marks, in-water observations, photo matching of individuals, and data entry. In addition, lectures are given throughout the 10-day field course to supplement field observations.

When not in the Bahamas, WDP engages in Florida offshore and intracoastal surveys to help document species diversity of cetaceans along the southeast coast of Florida. Acquiring baseline information about species location and diversity along our Florida coast will contribute to our knowledge about how human impacts may affect dolphins and our coastal environment off Florida. 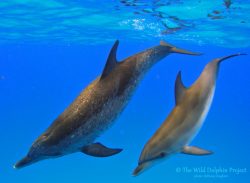 Your ticket for the: Goals and Objectives