Writing and Photos By Bethany Augliere

I’ll just start by saying that Trip 4 was fantastic! We had spectacular weather, amazing dolphin encounters, and a great group of people.

On our crossing over to Grand Bahama Island, some of the crew onboard saw false killer whales. We didn’t get a close look at them because they surfaced just a few times and then disappeared somewhere in the Gulf Stream. False killer whales are the third largest member of the oceanic dolphin family, followed by the orca and the pilot whale.

Once we got to the Bahamas, our first full day of surveying we had glassy conditions and ran into a group of dolphins from the southern pod. We even saw FlyingA, who was last seen in 2016, so that was really exciting. The water was so calm we could see near perfect mirror reflections of the dolphins at the surface, as we swam alongside them. 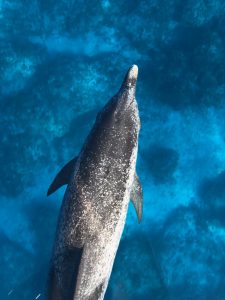 This shot of FlyingA was taken from the bow of the boat. Photo by Bethany Augliere.

During one encounter, we were in an area of the Bahamas known to be “sharky,” and indeed, a couple of lemon sharks and reef sharks showed up. The dolphins didn’t seem to be concerned and actually grouped up and buzzed one of the lemon sharks, who then took off.

In a “sharky” area of the Bahamas, a few lemon and reef sharks showed up while researchers and passengers were in the water. Photo by Bethany Augliere.

That first day we also took a snorkel break on some airplane wreckage we had never explored before, and it was filled with marine critters! We saw several large loggerhead sea turtles, southern stingrays, nurse sharks, grouper, schools spadefish, African pompano, and lots of other little reef fish. At one point, a sea turtle swam into some rope trailing from a fishing trap. Our first mate pushed him out and then a couple of the crew worked together to cut the line, in hopes that nothing else would get tangled up.

Unfortunately, even miles and miles from land we can see the impact of humans on our oceans, whether that’s rope tangled around coral reefs or balloons drifting at the surface. Once during this trip, I grabbed a black plastic bag one of the dolphins was playing with. The sad reality is that even recycling is not enough anymore, and we need to get better and reducing our consumption of plastic. If you’re curious how to do this, check out a blog post from WDP for Earth Day.

After a couple more days exploring off Grand Bahama Island, we ran into a group of spotted dolphins closer to the island. None of the crew, including myself, recognized a single individual in this group. Spotted dolphins are born grey and gain spots with age. We use these spots for photo-identification to track animals over time. So, it’s possible, this is a small pod that we just haven’t seen in many years, so they’ve gained enough spots to the point of being unrecognizable. So far, we haven’t matched any of the animals to animals in our catalog. It’s also possible this is an immigrant group, which has happened before.

On Saturday, we decided to head down to Bimini, our second study site. Down here we actually saw a young giant manta ray! Again, we also had lots of great dolphin encounters including playful juveniles and a long encounter of interspecies aggression between two bottlenose dolphin males and three younger spotted dolphin males. The two bottlesenose were primarily targeting an individual we call Lettice, by biting, chasing, and sidemounting him. The bottlenose never really hurt or kill the spotteds, despite being about a third larger in size. Still, it can be difficult to watch at times, but it is part of their culture and our job is to document and observe, to better understand the species, so we can ultimately protect them 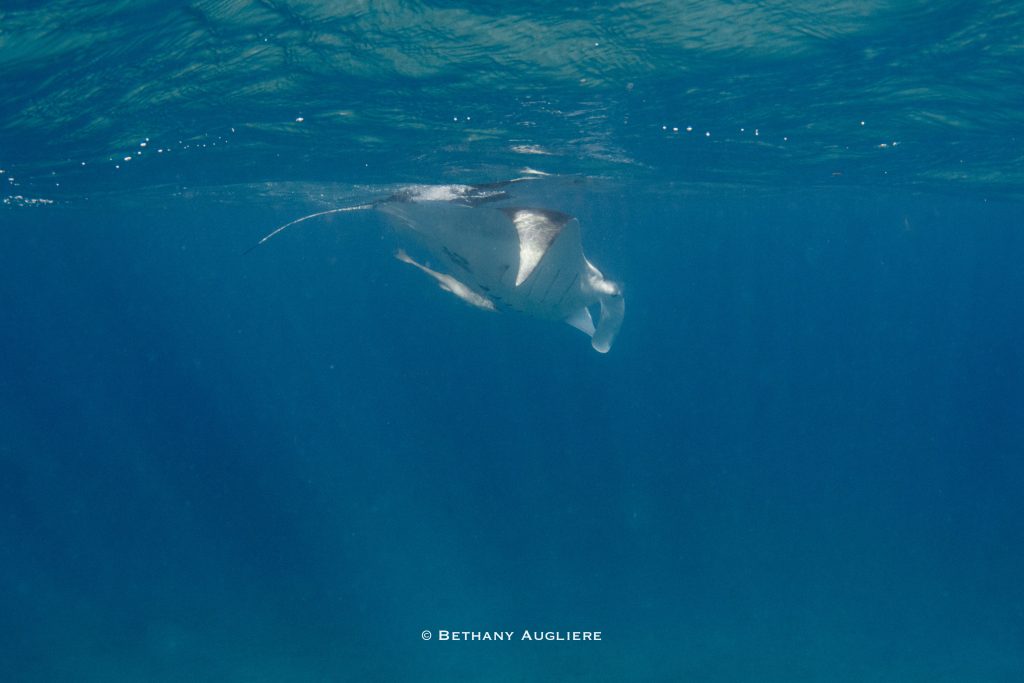 A young giant manta ray swims at the surface near Bimini. Photo by Bethany Augliere.

On thing we noticed on this trip was a few dolphins with new wounds that appeared to be from boat strikes. Rudder, a new calf this year, had several gashes on his side. The wounds were relatively fresh and still pink.  Fortunately, dolphin skin can heal quickly, and he appeared to be swimming and acting normally. We will watch him throughout the season.

On our very last day, we were anchored in the evening when a single man on a nearby tiny boat was waving his his hands in distress. We deployed our inflatable dinghy, and our two captains went over to check out the situation. Turns out, he needed some fuel, which we could happily provide.

Our captains deployed the inflatable dinghy to go help a Bahamian in distress on a small boat— he was out of fuel. Photo by Bethany Augliere.

The next morning, we crossed back to Florida. Again, it was a smooth day and this time, we saw lots of leaping and bowriding offshore bottlenose. The offshore eco-type of the bottlenose dolphin is much larger than the coastal type.

Stay tuned on our next blog for Trip 5!

Your ticket for the: Trip 4: Smooth Seas and Lots of Dolphins