Lost Lamda: A Stranded Dolphin in the Bahamas

We first observed Lamda in 2013 as a juvenile in the speckled age class (approximately 4-8 years old) and frequently saw him every field season since then for a total of 20 times.  In 2015, he moved to the mottled or young adult age class (approximately 9-15 years old). Based on this, we estimate him to be approximately 10 years old. He is often seen with large groups. In 2018 alone, he had 21 common associates.  He has also been sighted with bottlenose dolphins on 5 different occasions. He is active in his group and has recently been observed engaging in courtship and mating behavior with female spotted dolphins in his group. Lamda is easily recognized by his distinctive spot patterns and was last seen by WDP  on August 7, 2018. There are 2 videos uploaded to our YouTube channel which illustrate his normal behavior in the summer of 2018, prior to his stranding: After catching a fish and Mating with a female. 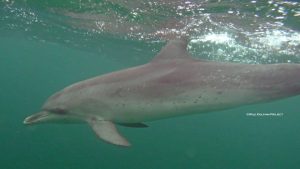 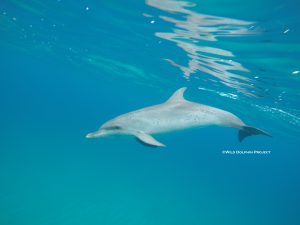 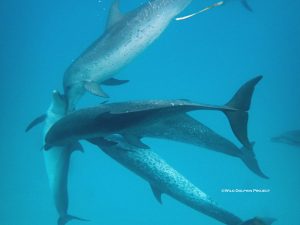 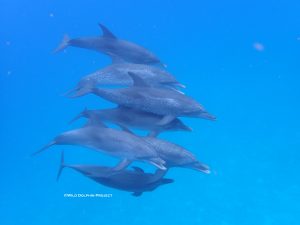 Lamda observed with a large group, 2017 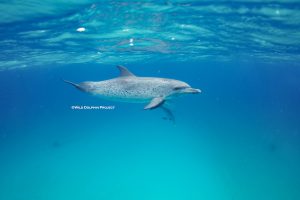 Lamda, now with more identifying spots, is observed in 2018 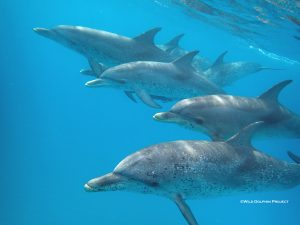 It isn’t very often that we are notified of a stranded Atlantic spotted dolphin from our known resident community. However, in early September we were notified by our colleague Dr. Diane Claridge, that a male spotted dolphin had stranded, and was being rehabilitated in the Bahamas.  Thanks to her fast-acting group  Bahamas Marine Mammal Research Organization (BMMRO), this dolphin received critical care and was flown rapidly to an Animal Rescue Center in Nassau, Bahamas.

After WDP received photographs of the individual, WDP’s Research Assistant, Cassie Volker, set to work on identifying him.  At the time, we didn’t know if it was an individual from our group, since spotted dolphins are found throughout the Bahamas.  But after carefully reviewing photos from the stranding and throughout his rehabilitation, there he was, Lamda, a 9-10 year-old male from our Bimini group.  With his spots clearly matched on both sides, and a full sighting history available for at least 5 years with our group, we quickly confirmed that we knew who he was and where he lived.  Last seen by us in early August, somehow, for some reason, Lamda had stranded about 70 miles east of his normal area, in the Berry Islands. 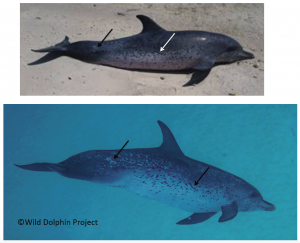 By comparing photos taken while Lamda was stranded on the beach, WDP was able to identify unique spot patterns and recognize this dolphin as Lamda.

Further comparing a photo taken during his rehabilitation at Dolphin Cay in Atlantis, WDP confirmed this dolphin is Lamda.

It’s true, we are only out in our field sites in the summer, predominately because of weather. Dolphins and whales often surprise us by their larger-than-known ranges.  In our case, we don’t tag our dolphins, so their full range remains a mystery.  So the fact that Lamda was found far away from his summer location might indicate that these individuals range far and wide.

One of the powerful strengths of this stranding response has been the cooperation of the groups involved.  BMMRO has a great stranding network in the Bahamas, and also provide training for citizens and groups in the area.  The team at Atlantis in Nassau provided the expertise for medical treatment, air lift, and full rehabilitation. We jumped in to provide an early identification of the individual, and his sighting history, leading to support from the Bahamas Government to return Lamda to his group, should his rehabilitation be successful.  We also rallied our best team to take R/V Stenella back to Bimini to do reconnaissance for Lamdas’ group, and serve as an assisting vessel. Dr. Randy Wells, from Mote Marine Laboratory & Aquarium, offered a satellite tag and tracking for Lamda, so he could be monitored after release, a critical piece of knowledge after he returns to the wild.

Kelly Melilio from the Dolphin Communication Project and her husband Al Sweeting, from Bimini, also stepped up to offer additional boat support locally for any follow-up tracking of Lamda. 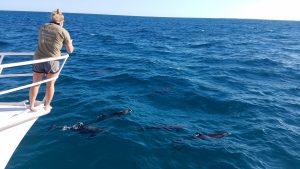 On the morning of Monday, October 29th a seaplane brought Lamda over to Bimini from Nassau.  He was ferried to a small boat and began his trip out of the harbor and back out to sea. Lamda was satellite tagged before release so we could track his movements.  Although it was highly unlikely we would have his friends near our boat during release, we at least knew that some of them were only a couple miles away, in their normal habitat area.

Since we had tracked his family for the two days previous to release, we had a pretty good idea where his associates could be found. Lamda was launched into the water nearby where his group was last seen. Our RA Cassie Volker documented his first moments back in the water, and our field assistant Liah McPherson kept a visual on him using a drone. We were able to follow Lamda for about 20 minutes heading south.  By late that afternoon, Randy Wells, and his tracking team at Mote Marine Lab had sent us the first satellite data showing that Lamda continued to move south on the edge of the sandbank.

There are 2 videos uploaded to our YouTube channel: Underwater footage after his release and Drone footage of the release and moments afterwards. 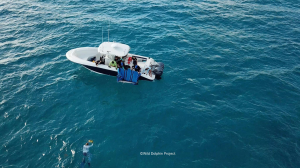 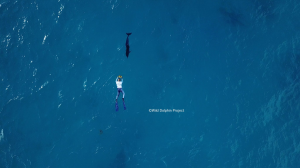 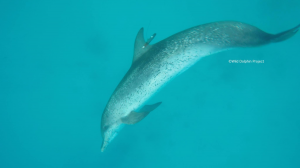 Lamda is swimming free in the clear Bahamian water with a satellite tag attached securely to his dorsal fin.

Over the next two days we stayed in the area to try to track Lamda visually and see if he had joined any spotted dolphin group, but by this time he was well beyond our reach and on his own.

We now leave Lamda to swim free and we will be monitoring him in the months to come, to make sure he is still mobile and to discover where this mysterious male spotted dolphin goes in the winter.

As R/V Stenella headed home, we feel like we were able to help Lamda, as many animals need help these days, with a little support and assistance.  Although we still don’t know why he stranded (no injuries, broken bones, et cetera), he is a lucky dolphin to be found and treated by caring humans.  And we will monitor his progress and movements for the next few months.  Perhaps in the end, Lamda will have taught us more than we have ever known about the true home range of the Atlantic spotted dolphins in the Bahamas.  It’s also possible that Lamda represents the male pattern of ranging, or perhaps he is a rouge, moving around where he pleases.  Either way, we are glad Lamda is back in the ocean and we are happy to have helped him along the way.

Also a BIG THANK YOU for our membership sponsors for helping us fuel R/V Stenella to get her across to the Bahamas to help Lamda. 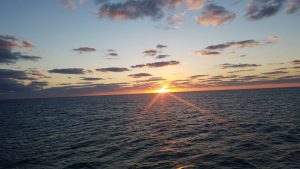 -Staff and Crew of the Wild Dolphin Project

Your ticket for the: Lost Lamda