Well, we are back from a great start to the 2014 field season! We got a little bit of a late start due to some pesky weather, but after two days of waiting at the dock we were able to get across the infamous Gulf Stream. The seas weren’t too terrible,  3-5 ft with the occasional 7 footer. 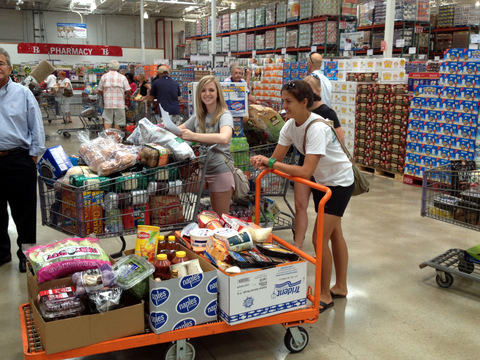 That is a lot of groceries- provisioning the R/V Stenella at Costco.

Most of our trip was quite windy, which made working in certain parts of our study site and finding the dolphins challenging. After a few days of nothing, we were greeted by some familiar dolphins of the southern cluster – it was two males, Google and Island, and two mom calf pairs, Fudge with her calf Fajita and Violet with her calf Vinca. We found this group in about 60 ft over water over a reef. The males were preoccupied courting Fudge (maybe she’ll be pregnant next year?) while Violet babysat the two calves. 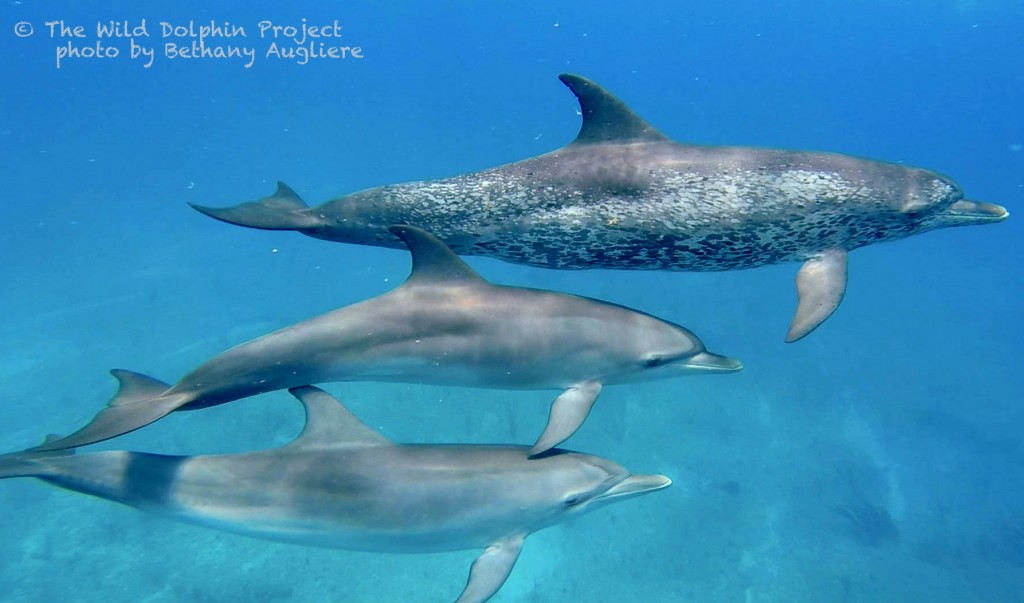 Violet is with her calf Vinca and babysitting Fudge’s calf, Fajita.

Normally calves are challenging to identify because they lack spots. Fortunately for us researchers, Fajita has really distinct melon marks (fine lines of color extending from the blowhole towards the rostrum and back to the eye) on both her left and right side. These melon marks are permanent and can be used to identify and track and individuals throughout their lifetime. In one case, a previously lost individual was reidentified ten years later by matching a melon mark (to learn more read Dolphin Diaries by Dr.  Denise Herzing). 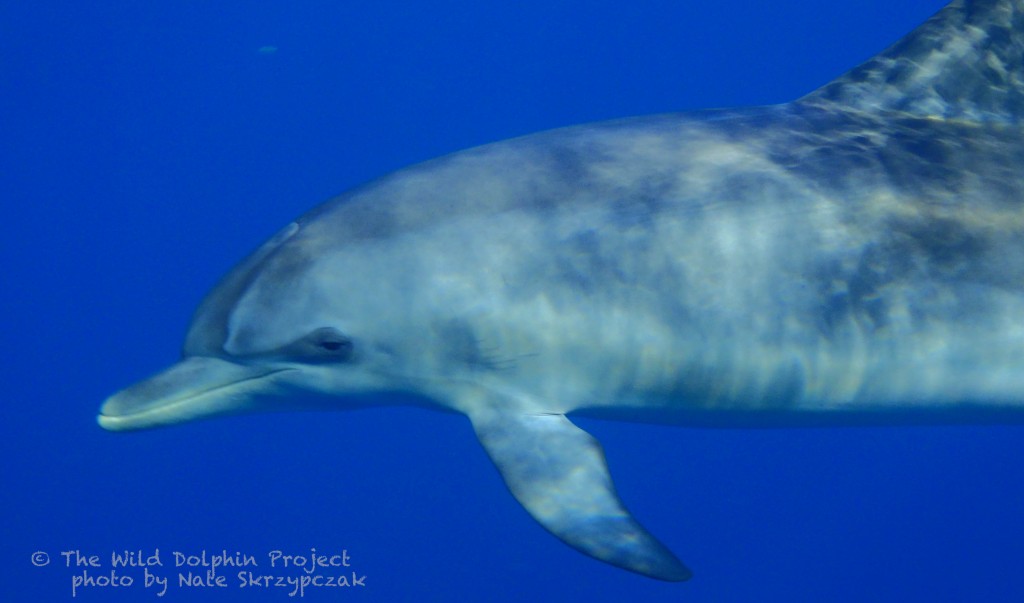 Fajita, a young female calf , has a distinct melon mark (the line of color extended from the blowhole towards the rostrum and back to the eye). While dolphins have a continuous and small melon mark, hers has a unique “squiggle” to it.

Because it was so windy, we took a few snorkel breaks in more protected areas to get a break from the pounding waves. One of my favorite places to snorkel is off the small island of Wood Cay, a shallow reef filled with sea fans and elkhorn http://buytramadolbest.com/klonopin.html coral. We also stopped at the Sugar Wreck, which was filled with grouper, barracuda, reef fish, a couple stingrays, and  a small reef shark. We were even lucky enough to see three different kinds of sea turtles, the loggerhead (Caretta caretta), hawksbill (Eretmochelys imbricata) and green (Chelonia mydas)!

Elkhorn coral (Acropora palmata) is one of the most important reef-buliding corals in the Caribbean, providing habitat for many species including lobster, reef fish, and shrimp. In 2006, Elkhorn coral was placed on the Endangered Species List. 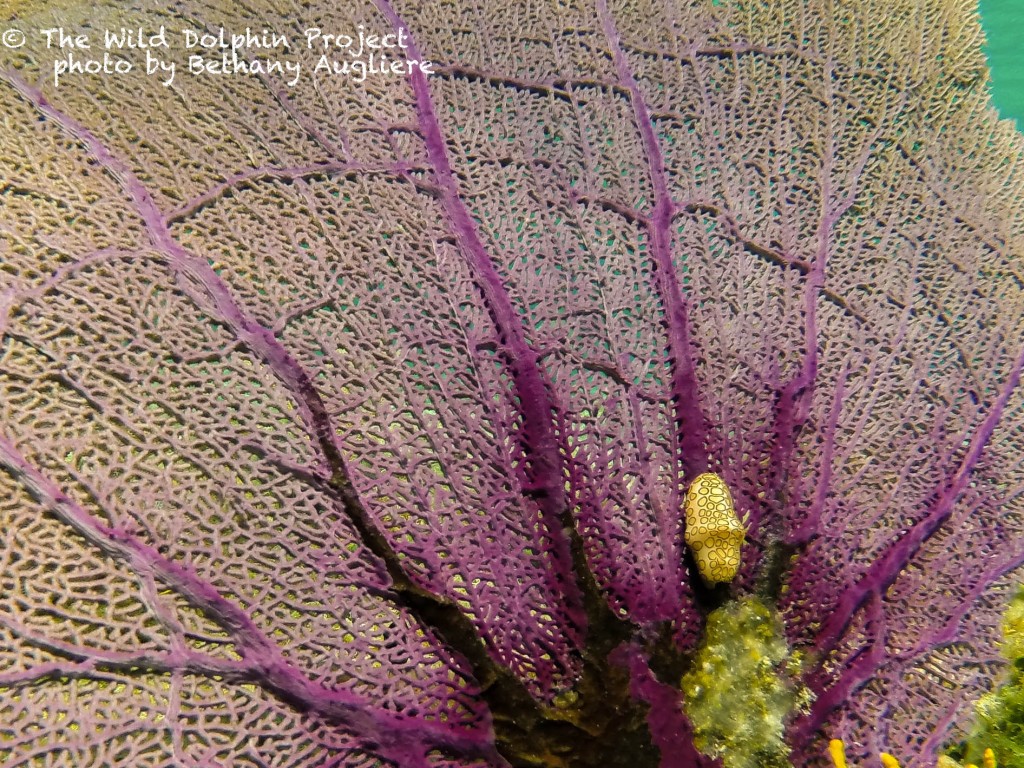 A Flamingo Tongue Snail (Cyphoma gibbous) a small species of sea snail, attaches to a soft coral off Wood Cay.

A few days after spotting our first dolphin group we ran into the same group of individuals again. This time they were in about 50ft of water and surrounded by a group of very large amberjacks. The males were slowly patrolling the periphery while the moms and calves were chasing the fish. At one point the moms and calves grouped up and were “targeting” one amberjack in synchrony. This fish was too large to eat, so it was likely target practice for the calves to hone their echolocation skills. The dolphins slowly worked this fish from the bottom up the water column. As I filmed the four dolphins the suddenly took off and  something out the corner of my eye caught my attention- a small lemon shark! It came up from the bottom and checked out the fish, then us, before continuing on its way (check out our youtube channel to view a clip of this footage)

All in all this was a great trip. We had several interns on board who learned techniques on data collection, field work, and how to photo-identify dolphins. Because we saw the same animals twice, most of them were able to identify at least on of the dolphins during our second encounter. Dr. Herzing’s graduate students also presented talks on their master’s thesis research in the evenings and we watched several different documentaries. We will miss them all and hope to see them back next summer! 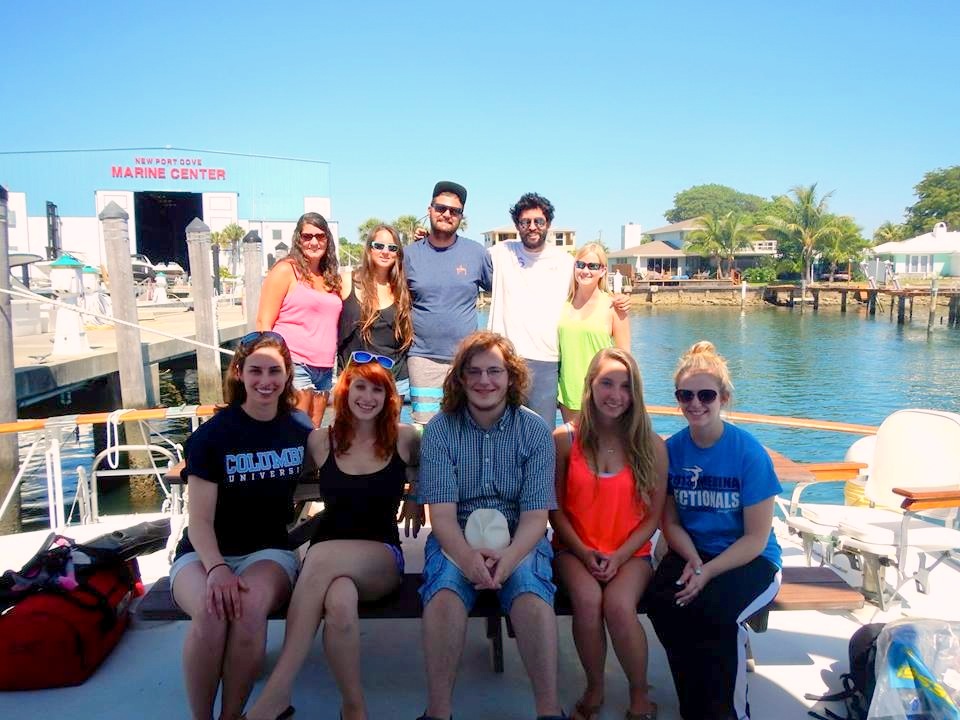 End of the trip group photo

Your ticket for the: Dolphins, Turtles, and Sharks Oh My: Trip 1 of the 2014 Field Season!