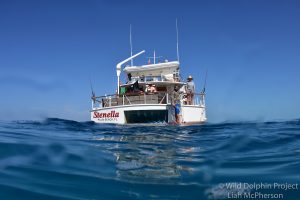 Though our second trip of the season began with a day of stormy weather, the wind soon died down and before long we were heading south to Bimini!  Five great interns joined us for the trip, and everyone enjoyed stopping at Hens and Chicks to snorkel on our way south.  From our first evening in Bimini to the morning we left, our days were filled with dolphins!  After a tricky field season in 2016, we stayed busy identifying lots of Bimini dolphins and figuring out some of their new markings.  We saw quite a few animals that we hadn’t seen in a couple years, such as Big Gash and Liney, and on multiple occasions, encountered large groups of spotted dolphins displaying aggression with some male bottlenose! 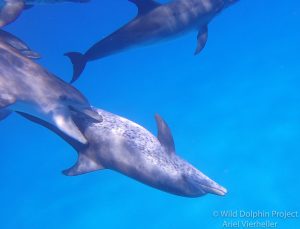 A few of our encounters were with mom-calf pairs, and we named four new calves that were born in between field seasons: Nassau’s calf Nautica, Bishu’s calf Birch, Mira’s calf Moose, and Sidewalk’s calf Swiper.  We also had a great encounter with Tyler, Tigger, Burgundy and Bueno, two of our mom-calf pairs that migrated from Little Bahama Bank in 2013.  Fecal samples were collected from Bueno, who is a special little guy— the project’s first 4th generation calf!  Only a boat full of marine biologists could get so excited about dolphin poop. 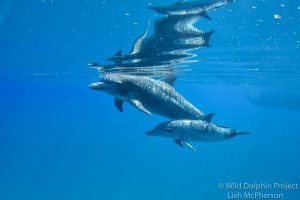 Tyler surfaces with her calf Tigger.

In between dolphin encounters, we were able to stop and snorkel at the Hesperus wreck and Mosel reef.  We also had a successful night drift with a group of juvenile dolphins that chased squid beneath Stenella and then bowrode back to shallow water, outlined in the dark by bioluminescent plankton.  Trip 2 was undeniably one for the books— in fact, on the last day, Captain Brad remarked that in his four years with the project, he had never been on a trip with more dolphins.  Lucky interns! 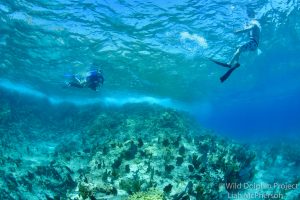 Three of our interns stop to snorkel at Hens and Chickens.

How can students learn more about participating as an intern during our next summer field season? Intern requirements, responsibilities, and sign up instructions can be found on our student internship page.