This trip marked the halfway point in the summer field season, I still can’t believe how fast it goes!

We had a little bit of everything, including some weather. This summer has been amazing weather wise, so I guess we were due. It wasn’t the worst we have had, but it kept us anchored for a few hours here and there running from daytime storms. But when we had clear skies we made great use of it!

This trip we had Hussain Aga Khan out with us. He is the Founder and Photographer for Focused on Nature (FON). Hussain has been supporting the project and chartering out summer trips since 2013. He is an avid animal/ocean lover and can’t get enough of the dolphins (or any other marine creature!). While he was out with us this summer he got to see some great behavior and some individuals we haven’t sighted in a few years!

We stayed up on Little Bahama Bank (LBB, our original study site) for a day and a half, but we did not spot our LBB dolphins. However, we had an interesting day on the water. It was really calm and flat, you could see to the bottom as we searched for dolphins. But even though the water was really clear, there was an interesting haze that made it seem like you were on a different planet. It was beautiful, but the haze limited our ability to see far out and catch a glimpse of a fin breaking the surface.

Once down in Bimini our luck picked up. We had lots of behavior and some great sightings. We had a few aggressive encounters during our 9 day trip, including spotted vs. spotted aggression and spotted vs. bottlenose aggression. We have seen a lot of spotted dolphin aggression this season which has been new for us down in Bimini. This does not necessarily mean something drastic has changed, but maybe they are just more comfortable with us in the water and are allowing us to view this behavior (remember we just started work down in Bimini in 2013). During these spotted vs. spotted aggressive encounters, it seems that the older males are fighting and then off on the periphery younger males are fighting too. We think this is the juvenile males “mock fighting” and watching the older males and learning from what they are watching and trying it out amongst themselves. Observing how others in your community behave is one way we think animals learn. If you would like to know more about this read these two scientific papers of ours (Transmission mechanisms of social learning  Evidence of teaching in Atlantic spotted dolphins). We also observed three spotted males fighting with three bottlenose males. During this aggressive bout one of the bottlenose males was making some pretty loud jaw claps, a behavior often observed during dolphin aggression. 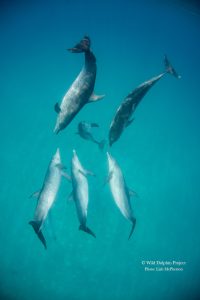 Here are two groups of spotteds going head to head, you can even see that some are doing open mouth displays as well. Both the open mouth and head to head behavior are seen often during aggressive interactions.

In THIS YouTube video which can be found on our channel, you’ll see the water was a little murky during the encounter but you can hear the jaw clap really clearly. You will see a bottlenose dolphin to the right of your screen, he will eventually swim in front of the three spotted males (we call this a perpendicular pass and is an aggressive display by the bottlenose). Then you will here a sharp snap sound, that is the jaw clap. The bottlenose perpendicular passes in front of the spotteds two separate times and jaw claps after each pass.

Aside from the aggression, we also had a fantastic last encounter of the trip. During this encounter we were able to see some LBB individuals who moved down to Bimini that we haven’t seen in a few years. And to our surprise, most of the females had given birth in the meantime!! We saw Bishu (last see in 2017) with her new male calf we named Bonzai, we also saw Lava (last seen in 2017) with her new calf Leopard, Laguna with her new calf Lentil, and Marble with her new female calf Mango. It was great to not only see these females again, but to also know they seem to be healthy and are reproducing. We also saw Geo (last seen in 2014) he is an old fused male about 28 years old, he was first seen as a two tone in 1991. Geo is very easy to ID based off of his ragged dorsal fin. It was great seeing all these LBB dolphins, but it does make us wonder why we can go a few seasons without seeing them? We weren’t in a new location, we were right where we usually are. So why were they there this time, and not others? It really makes you wonder what their total home range is, and where they go when we don’t see them for a season. But this is the beauty, and difficulty, of working with wild animals – In their world, on their terms! 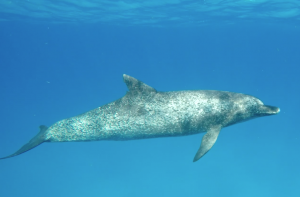 This is Geo, you can see his cut up dorsal fin that makes his easily identifiable.