We found ourselves on Trip 4 with another spectacular stretch of good weather. Consecutive flat days, with no wind, are unusual, especially in the spring. But the first half of our 2019 field season has proven to be very calm. Although with no wind it can be sweltering, and we always hope our air conditioning doesn’t go out during this kind of weather. It is both amazing for dolphin observations, but savagely brutal for working on deck without wind. El Nino years have historically been good weather and low hurricane threats in the Atlantic, and although there is a weak El Nino so far, we will see how the rest of the field season, through September, fairs. 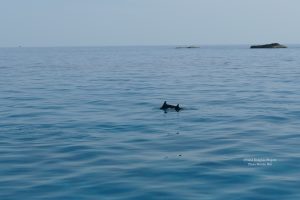 Two bottlenose come to the surface in really calm seas near Hen and Chicks, a popular snorkel spot.

This was also our trip to pick up our first round of deployed passive listening devices, EARs, on Little Bahama Bank (LBB). Last trip the crew found some of our missing Little Bahama Bank spotted dolphins, some pregnant, and with bottlenose dolphins. After retrieving and redeploying the newly redone EARs, and with no LBB dolphin sightings, we headed for Bimini where the majority of our resident dolphins now roam. This summer we once again are utilizing drones and testing new GoPro cameras to gather data on the spotted and bottlenose dolphins.

In Bimini, most of the mature female dolphins are pregnant. At about 6 months we can visually detect pregnancy. So, at the end of our field season in September, we will have VERY pregnant females, who likely give birth in the fall after we end our field season. And we also may have newly visibly pregnant females, who likely give birth in the spring before the start of our summer field season. Our peak calving seasons are spring and fall for the Atlantic spotted dolphins. On our original study site, LBB, we noted a few exceptions over the decades, with a couple August births. But historically, spring and fall have been peaks for calving seasons. 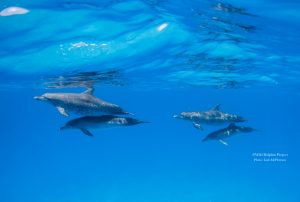 Males are known, from albeit limited data, to have two rutting periods; one in the spring and one in the fall. During peak rut, male testicles may double in size, giving the appearance of a ventral keel on their underside. In the water, these males can be mistakenly noted as pregnant females, until further close-up observations are made or sex is verified. So it looks like a good year with many reproducing females in the group and many willing males around to help. 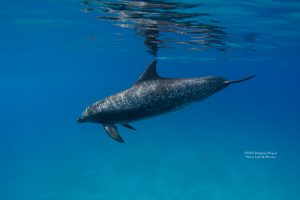 This is a fused male we call Drogo. You can see how swollen his underside is near the genital slit area, indicating he is in rut.

For those of you following the story of our rescued and released dolphin, Lamda, he has been sighted on a regular basis this summer in his normal social group behaving like an adult male spotted dolphin should. Go Lamda!!