Are Dolphins and Porpoises the Same Thing?

Juvenile spotted dolphins in the Bahamas.

Ever wondered what —  if any — the differences were between porpoises and dolphins, and why it even matters? It turns out that while the words are used interchangeably, dolphins and porpoises are in fact, different.

To understand how, first you need to understand taxonomy. As humans, we tend to categorize things and taxonomy is our attempt to name and classify plants and animals. This lays the critical foundation to study species, understand their evolution, as well as understand biodiversity and any necessary conservation action. In order to study and protect something, you need to know what it is.

So how does it work?

Taxonomists name and group organisms in a hierarchical rank, based on similarities found in their genetics and shared characteristics. The current rank system — from most inclusive to least — is as follows: domain, kingdom, phylum, class, order, family, genus and species. Within these categories, there are various subcategories too, just to complicate things more.

Marine mammals all share the characteristics of mammals, but they have adapted to a life in the ocean. Let’s walk through the taxonomy for a spotted dolphin and compare it to a harbor porpoise.

Harbor porpoise next to a diver for size comparison. Photo credit: Wiki Commons.

Of the two families, dolphins have greater diversity. There are 32 living species of dolphins and only six species of porpoises. Dolphins range in size the 5.6-foot Maui’s dolphin to the 31-foot orca, which is the largest dolphin. Yes, orcas are dolphins! Porpoises, however, are generally smaller and range in size from the 4.6-foot vaquita (the world’s smallest cetacean) to the largest porpoise, the Dall’s porpoise, which reaches lengths up to 7.5 feet. (Read more from NOAA here).

In total, there are about 80 living cetaceans, which broadly fall into two categories or “suborders,” the toothed whales and baleen whales.

The baleen whales lack teeth and are the largest animals on Earth. They feed using a large fringed plate, called a baleen, that’s made of keratin (the same thing in our fingernails) and hangs from the roof of their mouths. They gulp massive amounts of water to scoop up tiny critters like krill, then filter out the water through their plate while trapping the food in their mouths. Some familiar baleen whales include humpbacks, blue whales, right whales and gray whales.

The other group of whales are the toothed whales, which total about 70 species. This group includes dolphins, river dolphins, porpoises, belugas, narwhals, beaked whales and the largest of all toothed whales — the sperm whale. Some of these whales have many teeth. The bottlenose dolphin, for instance, has 88. Others, like the narwhal have just two teeth, one of which is modified into its large tusk. So, while dolphins and porpoises are in a different family, they  are all considered “toothed whales.” 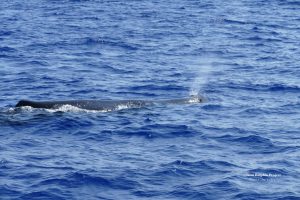 A sperm whale WDP crew on a research expedition in the Bahamas. Photo by research assistant Cassie Volker.

Read more about toothed and baleen whales from NOAA here.

Your ticket for the: Are Dolphins and Porpoises the Same Thing?

Are Dolphins and Porpoises the Same Thing?