Trip 6 had it’s ups and downs, but overall it was a great trip! We had passengers from all over the world. We had a couple from Germany, a passenger from New York, an intern from Brazil, and two other interns who were local.

This trip brought a lot of weather, dodging daytime storms pretty much everyday along with a tropical depression that lasted most of Monday. However, we managed to get some good dolphin encounters.

We started the trip up on Little Bahama Bank (LBB) and spent about 2 and a half days working the old study area. Some storms made it difficult to get as far north as we would normally like, but we worked some known dolphin areas really hard and found no spotted dolphins. We had a few scattered bottlenose sightings, but they were brief and elusive making surface photo ID shots from the bow difficult. However, we hit a few great snorkel spots while up on LBB so the guests could experience the clear beautiful waters and diverse marine life.

Once down in Bimini our luck changed immediately. The passengers were wondering if going two days without seeing dolphins was normal. We said that up on LBB, where there are now less spotteds than in the past, that yes it was normal. But Bimini on the other hand usually provided us with lots of dolphin sightings, and we were not wrong! We had four different encounters before we anchored down on the first evening in Bimini. Two of these were short swim bys (where the dolphins were traveling) and two encounters where the dolphins hung around for a bit. One of these encounters had Lamda, the stranded dolphin that was rehabilitated and released back into the wild. Read Lamda’s story here.  He was with a fused male we have named Doc, and a mottled female we have named Roo. He seems to be integrating back in with his group and doing well! It is always nice to spot him while we are out on our research trips. The second encounter had three fused males (Baelish, Pulsar, and Toad) who seemed very friendly and curious, spinning us around and diving down with us. This was a great way to start off the trip! 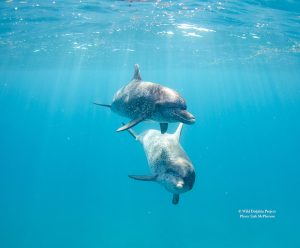 Here is a photo of Lamda (underneath) and Doc. As you can see, Lamda is doing just fine!

However, for the next couple of days the weather got the best of us. We had to run from storms and anchor down for most of middle of the day. But we anchored in good snorkel spots if possible, so people were still able to be in the water. After a few days, with little dolphins, we had a nice calm afternoon and a good afternoon encounter with two young adult males we have named Duke and Atlas. They were curious and playful and seemed to just be hanging around. Once they left, Captain Brad suggested a night drift because the weather was perfect and we lost most of the day to weather. Night drifts are hard to do because you need calm seas, but they are really great experiences! Night drifts involve us drifting off the deep edge with lights hung over the sides to draw up squid and flying fish (two spotted dolphin favorites). Atlantic spotted dolphins in the Bahamas are known to eat off the deep ledge at night. The hope is that we would see some feeding, and we did! We weren’t able to identify who it was, but it was four younger spotted dolphins and they stayed with us for about an hour. It was so neat to watch them fish at night and you could hear their echolocation going like crazy! Want to know what that sounds like? Listen to some examples on our dolphin communication page.

After the night drift we had a few more weather filled days. We were finally at our last day and we had two great encounters to end the trip! We had an hour-long encounter with three playful juvenile females (Littleprawn, Sycamore, and Akita). These three are sargassum hogs and can’t seem to get enough of it. They would dive down, toting a piece of sargassum on their pec or fluke, and drop it to another dolphin and play a game of what appears to be ‘keep-away’. They would even swoop in and grab a piece that one of us would drop for them. (When we engage with them, we never touch them, or take the sargassum from them. We wait for them to drop it to us before we pick it up. It’s the etiquette we use when interacting with them.) After the sargassum encounter, we came across a large group of males being aggressive. This was a very vocal encounter with a lot of squawks (vocals made during aggression) and a lot of aggressive behavioral displays such as head to head, open mouth, biting, and charging into one another. It was a great behavioral encounter and one the passengers really enjoyed observing!

Here are two great photos taken by our field assistant, Liah McPherson, of some spotted dolphins playing with sargassum.

We had pulled off a great trip and were heading home. Not long after leaving the Bahamas did we come across something really unexpected. Captain Brad started stomping on the bridge to alert us below that he was seeing something. We all rushed out, and he kept saying “I think it’s a whale!”. Sure enough we saw the large spray that seemed to be from a blowhole of a whale. We headed in that direction and sure enough he was right! It was a sperm whale! Everyone was so excited, it was my first whale sighting and I was stoked! What an awesome way to end a trip. Here is the video on YouTube.