Life in a Dolphin Pod

An exhale, a few black fins slicing through the surface, maybe a leap, and then they disappear. Most people only ever see dolphins from the surface, a glimpse from the beach or while on a boat. But that is only the beginning, the real story is what is going on beneath the waves.

In the 30 years that Dr. Denise Herzing has been studying spotted dolphins with the Wild Dolphin Project we have learned a lot about their natural history, behavior, social structure, communication, and habitat. In other words, who they are, who they hang out with, what they are doing all day, and what they are eating!

This pod or “community” of spotted dolphins is around 100 individuals, BigGash, Romeo, Mugsy, Nassau, Caroh, Bonito ….to name a few. But what exactly is a dolphin pod and what does it mean to be in a pod? Do all the animals stay together all the time? Who swims with who? Luckily, Dr. Herzing and some of her former graduate students including Dr. Cindy Elliser (now with the Harbor Porpoise Project) have answered some of these questions.

The 100 spotted dolphins in this pod are not all together all the time. The community breaks up into smaller groups, and the membership of these smaller groups fluctuates. This is called a fission-fusion society and seen in other animals like chimpanzees and bottlenose dolphins. However, in these smaller groups, there are patterns of associations, typically correlated with sex, age, reproductive status and kinship (or relatedness).

One morning I was swimming laps around the boat while we were anchored in a popular dolphin travel zone.  Romeo and BigGash came slowly cruising by, two males that are rarely seen without each other. Romeo and BigGash were first seen together as the in the 1980s as adults, which puts them in their 50s! Lhasa and Linus, Kai and Malibu, Mystery and Poindexter…the list goes on.  Some pairs of individual males have strong associations which can last a lifetime, in other words a “best friend.” In the scientific community, this is called an alliance. Often times, two or more alliances with individuals around the same age will group together, called a coalition. 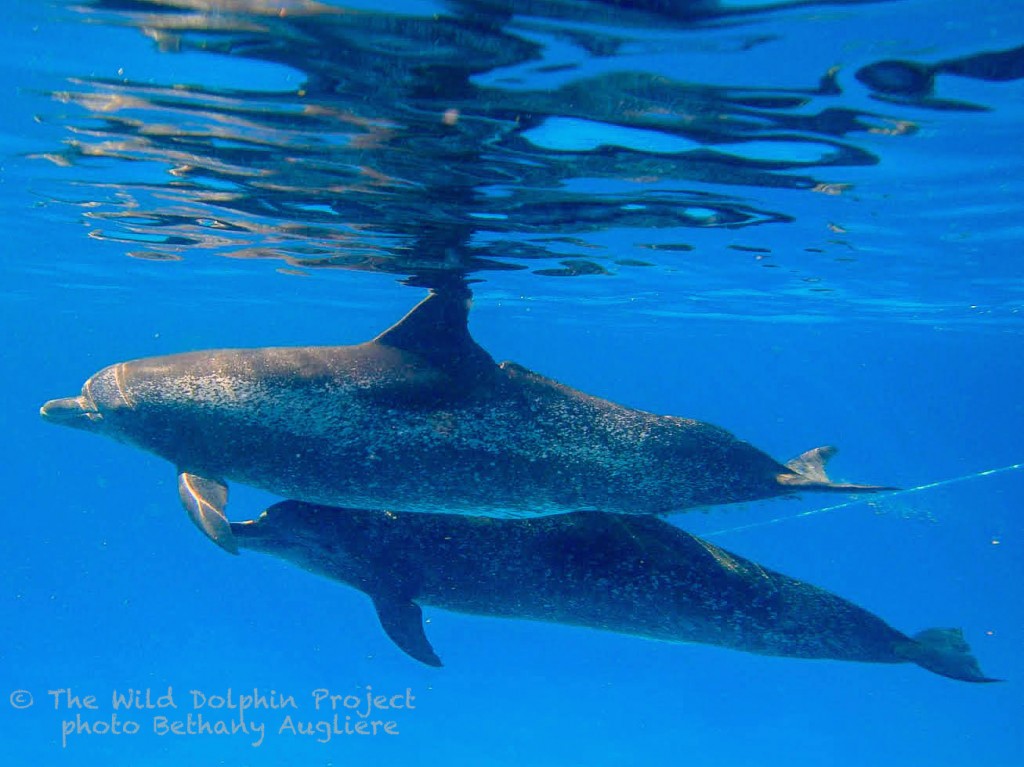 Male spotted dolphins often form long-term associations that can last a life-time, called “alliances.” BigGash and Romeo (behind) have been in an alliance since the 1980s.

So why does a male dolphin have a best friend, why form an alliance or a coalition?  The answer is simple: females and fighting. Male coalitions have been shown to monopolize females, which increases their access to females for mating opportunities. In Shark Bay, Western Australia, scientists (The Shark Bay Dolphin Project) have documented male dolphins preferentially herding non-pregnant females (1).  Another benefit to having an alliance is to increase chances of success during aggressive encounters with the much larger bottlenose dolphins. It takes about 6 spotted dolphins to chase away 1 bottlenose.

Spotted dolphin coalitions have been documented to have ritualized behaviors during these aggressive encounters, included synchronized swimming and vocalizations (2.) Jessica Cusick, a former graduate student with WDP and current doctoral student at Florida State University, found that male spotted dolphin synchrony was a crucial factor in determining success against bottlenose dolphins (3). Alyson Myers, a current graduate student at FAU, is going to further examine male synchrony and development during aggressive encounters.

This male coalition is going head to head and displaying an open mouth to the male bottlenose, an aggressive posture. The presence of male coalitions in spotted dolphins has shown to determine the success of aggressive encounters with bottlenose dolphins. It takes about 6 spotteds to chase away 1 bottlenose.

These male alliances become solid as adults. However, as juveniles they are hanging out in larger groups with other individuals, learning the rules and behaviors of the society from each other and other adults (aka getting into trouble!). They are often seen play fighting as well as babysitting,  learning how to take care of young offspring. At this age, juvenile males begin forming the relationships that will later develop into alliances and coalitions. Achilles, Leucadia, Legend, and Bonito are all young speckled males that seem to be the up and coming coalition. Of the 4, Achilles appears to be the boldest…quickly jumping in at fighting opportunities with bottlenose dolphins, despite his smaller size and age. It will be interesting to watch these individuals grow and develop to learn even more about coalition formation and development. 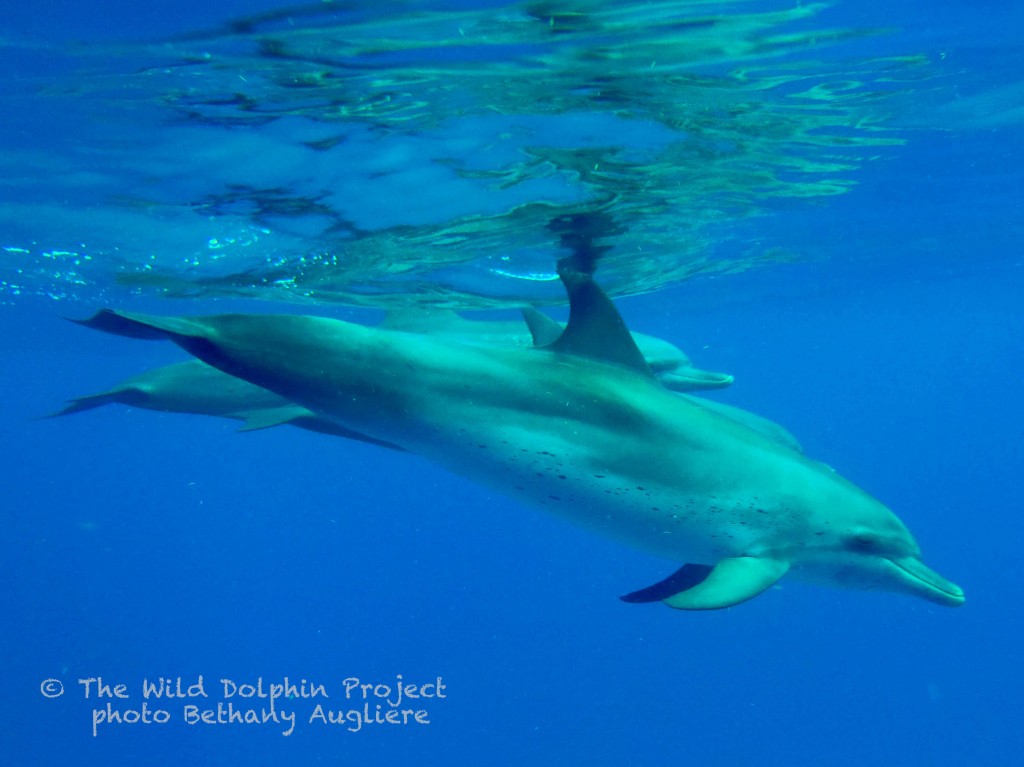 Achilles is a young male that is frequently seen with his friends, Legend, Leucadia and Bonito. At this age, juvenile males begin forming the relationships that will later develop into alliances and coalitions.

So what about the females?

text and photos by Bethany Augliere

Your ticket for the: Life in a Dolphin Pod: Male Social Structure