A Quick Trip Over Thanksgiving!

This year has been quite a challenge, and we thought our data collection was going to be limited to the two trips we had in July. However, the weather gods provided us one more chance to get back over to The Bahamas for a few more days of dolphin searching.

This weather window happened to be over the Thanksgiving holiday, so that meant turkey dinner on the boat. We didn’t have a full thanksgiving spread, but we had the essentials and most importantly we had pie!

We were supposed to leave on Wednesday, but the wind was still howling and we had to leave bright and early Thanksgiving Day. To make the most of our short time window, we did a double crossing that Thursday. First, we made the six-hour crossing across the Gulf Stream to Grand Bahama Island, cleared customs, and then made another seven-hour crossing across the Northwest Providence Channel down to Bimini. That night, we finally anchored down around 8:30pm but we would be up first thing the next morning, pulling anchor at 7:30am to get an early start before losing daylight around 5:00pm.

For the next three days, we had unbelievably good weather for late November. The seas were calm and glassy, and for most of the time the sun was out providing some warmth. This combination made for perfect dolphin sighting weather.

During these three days, the dolphins seemed to be constantly in travel mode. Since we aren’t in The Bahamas during the winter months, this may be normal behavior for them during this time. They may be searching for food more frequently, causing them to be moving around the sandbank more often. But for whatever reason, they were not slowing down for anything or anyone. This made things a little more difficult for us, and made for some tiring days getting in and out of some chilly water. Over the summer months, the ocean temperature in The Bahamas is around 85°F, and can get close to 90°F. However, since it was November, the water temp was about 77°F. That may not seem like much of a difference, but burrrr it felt cold, and good thing it wasn’t windy!

Even though the dolphins were in travel mode, we had a few brief glimpses of some behavior. We observed some courtship behavior and some interspecies aggression. The courtship behavior was between older adult Atlantic spotted males and females. We kept running into this group of about nine spotted dolphins. It was three fused females, five fused males, and one mottled male. We tried a few jumps, but one male blew a few torus bubbles signaling for us to back off. Torus bubble blows are seen during aggression and can also be a sign of irritation, so whenever one is directed at us we know it is time to get out and leave this group to do their thing.

In this video clip on YouTube, you see the three spotted dolphins (on the left of the screen) going head-to-head with 2 bottlenose dolphins (on the right of the screen). Then they all surface and the two bottlenose turn sideways and pin one spotted dolphin between them. This is the side-mounting behavior and it happens a few times in this short clip. 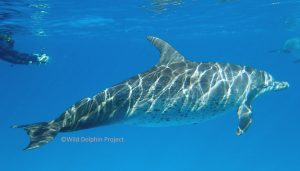 Lastly, we found another spotted dolphin that we have not seen in years! This year seems to be the year to find some dolphins we haven’t seen in a while. Remember Emerald mentioned in the blog from Trip #2? We last saw Emerald as a speckled in 2016. During this trip, we saw another dolphin that we haven’t seen since she was a speckled in 2016, Trimpy! Check out the difference in the amount of spots on Trimpy from 2016-2020. Trimpy is now in the young adult mottled age class. 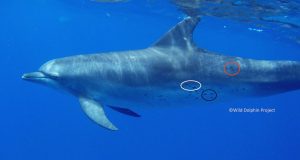 We are so thankful that we had a chance to get over to The Bahamas one last time before the end of 2020. We are now looking forward to hopefully a full 2021 field season!

Your ticket for the: 2020 Field Season: November