We try to get out once a week, but due to weather, boat maintenance, and crew schedules this can be difficult. During the winter months in Florida, we get strong winds that cause rough and bumpy seas which keep us from monitoring along the coast. This is one of the main reasons we don’t do research in the Bahamas during the winter as well; the wind makes the Gulf Stream too rough to cross. Aside from weather, our 62ft power catamaran R/V Stenella, needs a lot of tender love and care during the off season. During the summer months, May-September, our boat is worked into the ground. Our nine research trips are each nine consecutive days, occasionally with rough water, and always long working days. The Stenella requires a lot of maintenance in the off-season and yearly prep-work to get ready for the next field season.

However, on the weeks we can make it work we try our best to get out and do a Florida survey. Occasionally a member of WDP can join us and help survey.  We have different membership levels, ranging from a Neonate Membership all the way up to a Generation Membership and each membership level has different perks. If you are interested in a Wild Dolphin Project membership check out this link on our website. 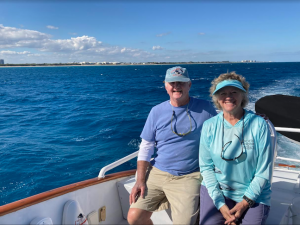 Our survey started at 8:30 am when we headed south from the Palm Beach Inlet. We had beautiful seas and we found a group of about four bottlenose dolphins at 9:15 am. Two of our members who were up on the bow of the boat, found them first and said they rode the bow for a little bit. I took some dorsal fin shots for ID’s and then we moved on to find more. 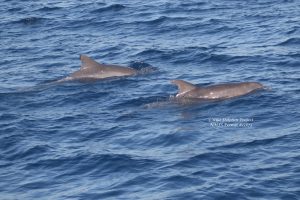 Bottlenose dolphins from the first sighting of the day.

Once we made it to the Lake Worth Inlet we turned around and headed back up north. While we were up in the Juno area the wind got stronger and the seas started to get rough. We decided we would survey up to the Jupiter Lighthouse and then turn back. On our way back, we found another group of about ten bottlenose dolphins with two mom/calf pairs. This group was harder to photograph because the waves were larger, and the dolphins surfed the waves and then quickly dove under. I was able to get a few dorsal fin shots, but not many since it was hard to track the dolphins at the surface due to the waves. When we can’t track the dolphins under the surface it’s hard to get a good dorsal fin shot when they come up to breathe. If we can’t track them it’s almost like whack-a-mole because we have no idea where they will pop up, and the chance of getting a nice clean shot is difficult when the animal only breaks the surface for a few seconds. After we lost track of this group, we headed back to our dock and ended the day around 2:30 pm. Overall it was a successful survey day since we found two different bottlenose dolphin groups, however we hope we will see some spotted dolphins on the next survey!

Your ticket for the: Florida Day December 2nd