We talk a lot about sargassum seaweed being a favorite toy for the dolphins we study in the Bahamas, but what exactly does that mean? For our blog this month, we want to share more about this special seaweed, how the dolphins use it, and how we use it to bond and interact with the dolphins to maintain their trust. 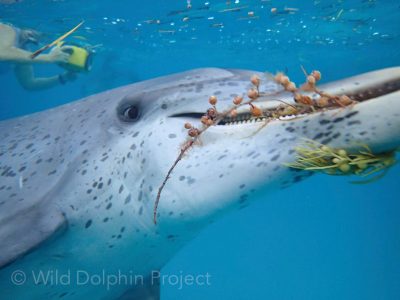 So, what exactly is sargassum?

Sargassum seaweed is a type of brown algae and there are more than 300 species. However, two of those species are unique in that they never attach to the seafloor and spend their lives floating on the ocean’s surface.  It drifts along the currents of the open ocean and accumulates in the Sargasso Sea, a region of the Atlantic Ocean bounded by four currents rather than land. Under normal circumstances, the large mats of floating seaweed act as their own island ecosystems, providing shelter and food for an impressive array of marine life, like sea turtles, fish and crabs, as well as commercially important species like mahi-mahi. The sargassum frogfish actually spends it’s entire life in the patches of seaweed. 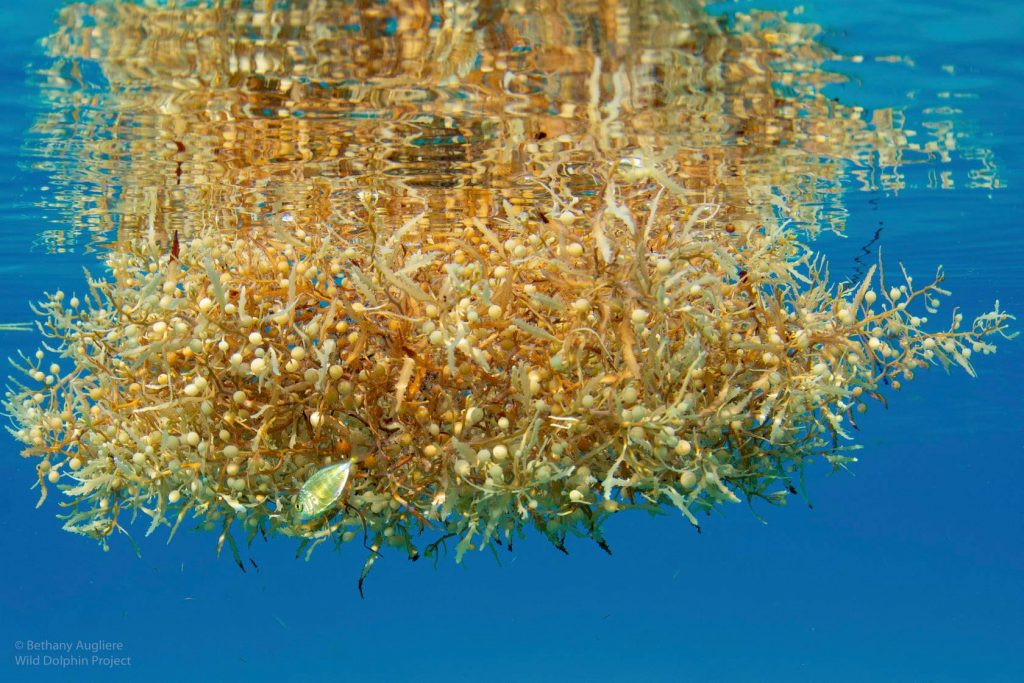 As the dolphins cruise along the surface, they stumble across these patches of seaweed. If they are feeling playful, they’ll start to use it for games of keep-away and chase, passing it effortlessly from their rostrum to their fins and even their tail. It’s often the groups of juveniles who engage in these games. One youngster might drag it on its fluke, taunting a group member behind them before eventually dropping it and then racing to pick it back up first. We also see some mothers who play with their calves as well, perhaps teaching them game.

Play is more than just fun for the dolphins. It’s an opportunity to learn important social skills and acquire information about their characteristics of their social group, as well as bond and strengthen relationships with those group members. It’s an opportunity for them to practice locomotor skills that will come in handy later in life for mating and foraging, and even fighting. Play even helps animals develop problem-solving skills. 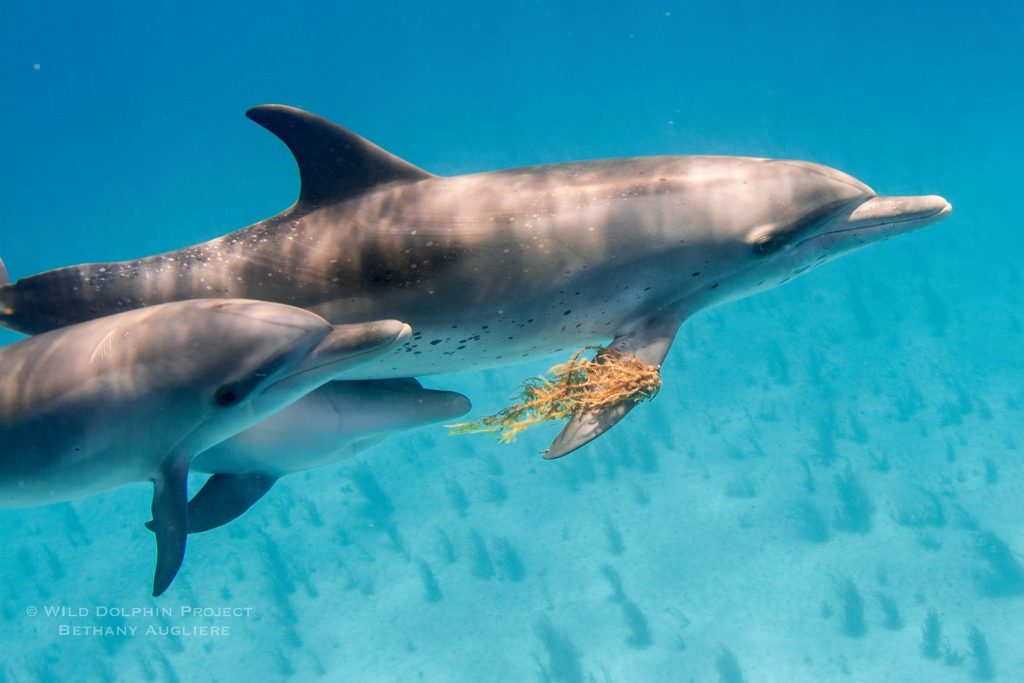 A juvenile dolphin drags some sargassum on the pectoral fin during a game of keep-away and chase. Photo Credit: WDP, Bethany Augliere 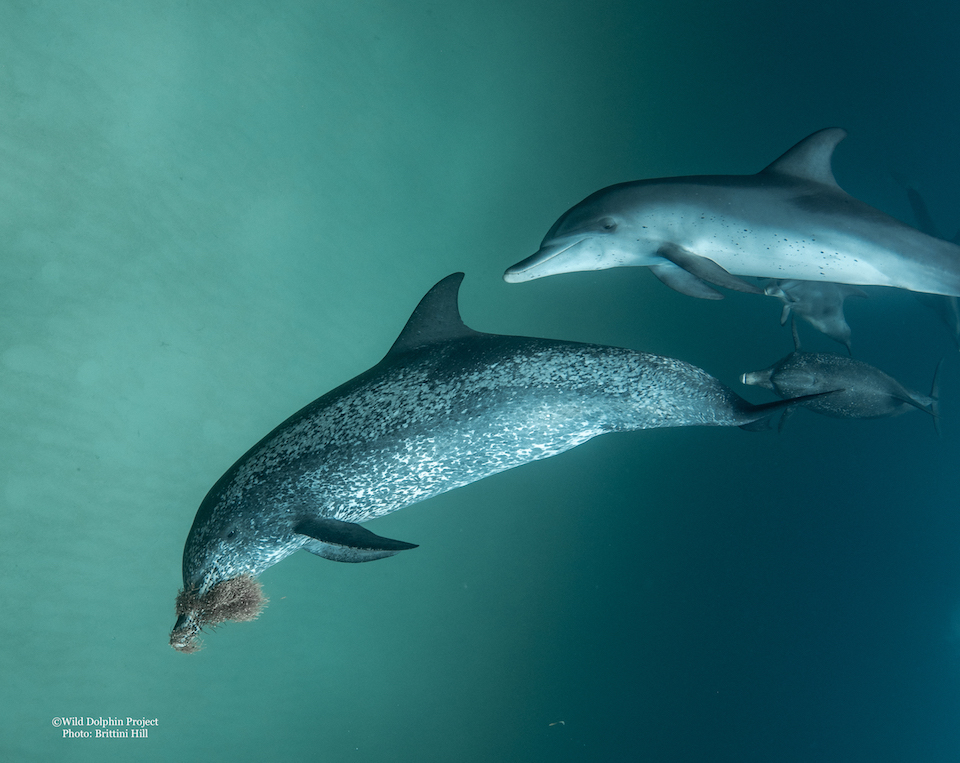 A mom carries sargassum in her mouth while her calf follows behind. WDP, Brittini Hill

As biologists, our job is to observe these animals without disrupting their natural behaviors like mating, foraging and nursing, so that we can observe and study them. The dolphins in the Bahamas are habituated to human presence, which means that they continue these behaviors in front of us rather than swimming away out of fear or caution.

Yet, as curious, intelligent social mammals, sometimes they want to interact and engage with us in the water. We’ll be observing a group playing and then they might pick up the sargassum and drop it right in front of us. If we dive to get it, they’ll let us. So we join the game. We drag the sargassum with our hands, dive down and drop it and watch as the dolphins zoom back in to pick up. These exchanges can go back and fourth, sometimes for hours.

For us, we use these interactive opportunities as a way to build trust and relationships with the dolphins so they continue to let us observe them. We never grab the sargassum away from them — that’s poor etiquette. Rather, we take our cues from the dolphins. If the dolphins disengage or move on to something else, such as feeding, we disengage as well and go back to our passive observation. Our goal is always to respect the dolphins, “in their world, on their terms.”

“Having the opportunity to participate in play with wild animals is an amazing privilege. It’s always fun to see their personalities come out during play,” says WDP research assistant Cassie Rusche. “Some are shy, while others are what we call sargassum hogs. Nautica, a speckled female, is especially stingy with the toy. She hardly drops it, and if she does she swoops back in to grab it before anyone else. She is also the one we commonly see with multiple pieces of sargassum at one time!” 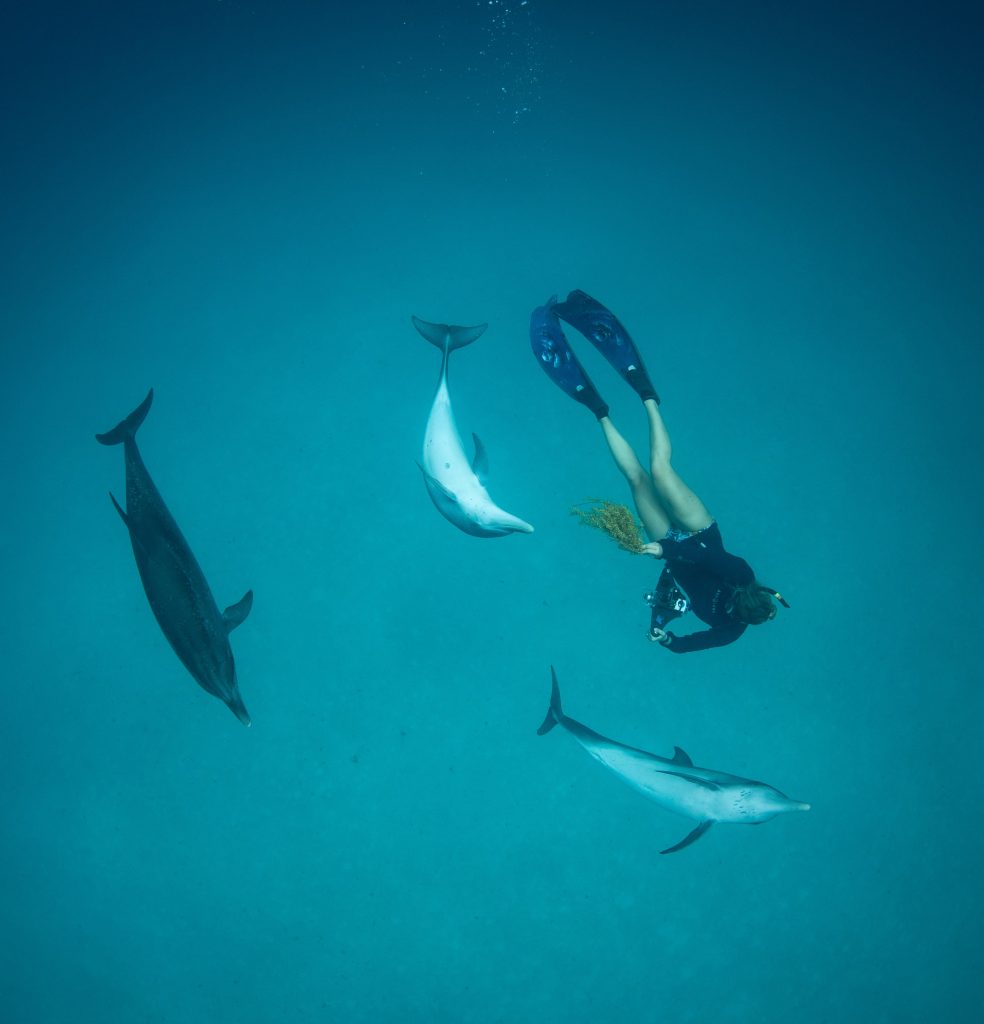 WDP research assistant Cassie Rusche dives down with sargassum during a game of sargassum keep-away, initiated by the dolphins. She’ll drop the sargassum to let the dolphins pick it up. Then, they’ll drop it and race to pick it up. (The dolphins usually win). Photo Credit: WDP, Brittini Hill

We don’t suspect there is much function for this sargassum other than being a fun toy. However, every so often we will see the bottlenose dolphins rub up against the sargassum attached to the seafloor, known as benthic sargassum. It’s possible they are using it to scratch themselves a bit or just because it feels good against their skin.

Too Much of a Good thing

In recent years, sargassum has become a problem due to excessive nutrient runoff from rivers, including the Amazon and Orinoco in South America as well as the Mississippi. Since 2011, unprecedented strandings of the seaweed have occurred over vast areas of the North Atlantic basin and Caribbean.

In a recently published study by Brian Lapointe, Ph.D., a research professor with FAU’s Harbor Branch Oceanographic Institute who has studied Sargassum seaweed since the 1980s, he found that found Sargassum today has 35% more of the nutrient nitrogen in its tissues compared to the 1980s.

The excessive Sargassum blooms are contributing to the decline of coral reefs, are dangerous for wildlife by smothering sea turtle nesting sites or entangling dolphins surfacing to breathe, and even a threat to human health. The rotting, foul-smelling seaweed clogs up canals and buries the beach, releasing hydrogen sulfide, which can irritate your eyes, nose and throat, according to the Florida Department of Health. It also contains heavy metals like arsenic and fecal bacteria. For that reason, the state monitors the water quality around beaches when Sargassum is present.

As Florida residents we witness this first-hand, when we see the beaches covered in the rotting seaweed. Luckily, in the Bahamas, we haven’t see large enough mats to cause problems for the dolphins, just small patches. Yet, it is still something to be concerned about for their well-being, which means caring about our water quality issues both locally and globally.

Read more about the issues with sargassum blooms in the Lapointe study in this story, originally posted on FAU’s Research Daily website, written by Bethany Augliere.

Listen to a recent podcast with Denise and Cassie talking more about sargassum and dolphin behavior on the Sargassum Podcast.

Learn more about sargassum biology and ecology in this paper, from the scientific journal Aquatic Botany.

Your ticket for the: Sargassum Seaweed, a Favorite Dolphin Toy