Our 32nd year in the field and some very BIG NEWS!

Well, it’s May and as it often is in the spring, a bit windy and chilling. Crossing the Gulf Stream to the Bahamas was a bit lumpy but after 6 hours we arrived to clear customs in the Bahamas. After a couple days, when the winds finally died down, we headed up to our study site and found a few of our regular dolphins including three rowdy juveniles spotted dolphins and eight bottlenose dolphins. With flat seas and crystal clear water, we spent our time photography for identification, and noting any health or reproductive changes. 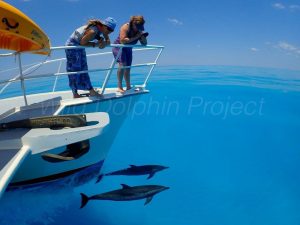 Some of you may remember, through our 2014 newsletter, that over 50% of our resident dolphins had picked up and moved in 2013 over 100 miles away from the location that had been their home for over 3 decades. So Wild Dolphin Project has, for every field season since 2013, been working in two different field sites to continue tracking our three generations of spotted dolphins. 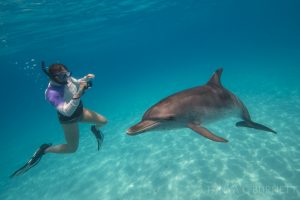 We had suspected a crash in the food chain as the cause of the dolphins’ move (through visual and anecdotal observations). Recently we have been looking at some oceanographic data that suggests this very thing. However, much to our surprise, and joy, this first trip in 2016 we were able to identify four of those long- lost spotted dolphins back in their normal area. This is huge, considering that we did not know whether they had moved for good, nor HOW they moved away. Did they move as one big group? Did they send a scout to look for food and report back on an alternative area to live? Why did the food chain crash anyway? We will keep you posted as the summer progresses as we try to identify if any other former residents that have returned, or not. Science is an ongoing exploration and our job is to tell the story and try to make sense of things. It’s all just s part of the ongoing mystery of dolphin life in the wild. 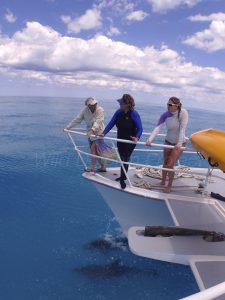