The Wild Dolphin Project was started by Dr. Denise Herzing back in 1985. Since then Dr. Herzing, along with her colleagues and graduate students, put out multiple peer reviewed research papers on the behavior, acoustics, and ecology of the two species we study in the Bahamas. Over the years she has observed behaviors that are more “rare” or are “one-offs” meaning there is not a large enough sample size in which to do a proper scientific study. However, these behaviors are still very interesting and hopefully you enjoy learning about them. Be sure to check out all of the blogs in this rare behavior series (Can anyone hear me, Pesky Remoras, Bottom Behavior, Bubbles, Synchrony).

Everyone Likes a Little Bubbly!

Bubbles come in handy for many things in a dolphin’s life. They can help with buoyancy adjustment, send a signal of aggression to a rival, or help displace a hiding fish from a vertical surface. During courtship, three to four male Atlantic spotted dolphins typically take turns chasing and attempting to mate with a female dolphin by getting belly-to-belly underneath her.  During this process, and in between snatching a breath at the surface, males often expel a bubble clump as they turn upside down. This appears to help them maintain the right buoyancy to stay in a horizontal position and remain belly to belly with the female. 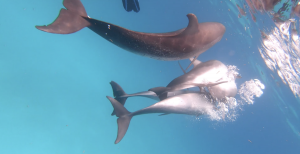 A bubble burst from a male Atlantic spotted dolphin during courtship. We speculate these bursts are used for buoyancy adjustment. 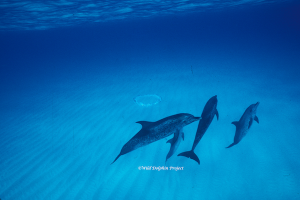 This is a torus bubble, a bubble that takes the shape of a ring and in the wild is used as an aggressive signal.

When a fish manages to hide behind a human, or against the side of our boat, the dolphins will go under the fish and expel a large bubble, attempting to dislodge the fish from the surface.  The bubble is usually accompanied by some intense echolocation clicks, so clearly the dolphins have their acoustic eye on the target.  They just need a little help, from the bubbles, in extracting their prey.

In this video clip you can see a filefish swimming for cover behind the humans and just after, one of the dolphins blows a large bubble. It seems that the dolphin may be trying to stop the filefish from reaching the safety of the humans by scaring it away with a bubble. But the bubble blow is just too late.

Although dolphins don’t really need to expel bubbles to make a vocalization, they often do when they get overly excited, especially when whistling.  We have observed this with all age classes of spotted dolphins, and usually they are making their signature whistle.  When a calf gets excited, they make a sound combining their signature whistle and a burst pulse sound (we call it an excited vocalization). This sound is always accompanied by bubbles and rapid swimming. Eventually the mother or a babysitter will show up and gently touch the calf, calming them down.

This video clip is example of an excited vocalization with bubbles being emitted.

Your ticket for the: Bubbles