The 2020 Field Season is proving to be an interesting and frustrating one. Due to delayed COVID-19 test results, this last trip started four days late and on top of that we also had rough seas for the remainder of the shortened trip. So we decided to make the best of our limited time and made two crossings on Saturday. We first crossed over to Grand Bahama Island from Florida to clear customs and then headed straight down to Bimini.

For our first encounter of this trip, we had four spotted dolphin females up near Hen & Chicks by Great Isaacs Lighthouse on Great Bahama Bank (GBB). We knew three of the female dolphins right from the start. We saw Sava (Mottled), Maiden (Mottled), and Maiden’s calf from last year that we named Muggle (Two-Tone). There was another mottled female dolphin, however, that took some time working with our ID catalogs to figure out who she was. After some time and a few passes through the catalogs, we were able to figure out that it was Emerald! A female spotted dolphin we haven’t seen since she was speckled back in 2016. If you look below you will see what spots we used to confirm it was her based on the photos from all the way back in 2016. From these photos, you can also see why it is important that we try and get photos of every individual dolphin during each summer field season. Atlantic spotted dolphins can gain spots really fast, and once they start overlapping it can be really hard to confirm who the individual is.

In the photos below you can see photos of both the left and right side of Emerald from 2020 and 2016.

Color coded circles have been made around the spots we used to ID her. 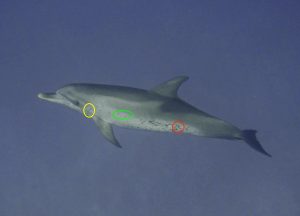 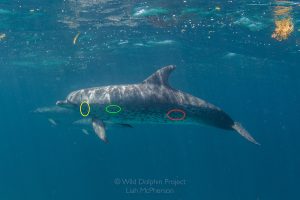 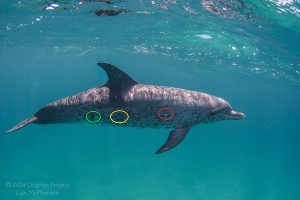 Later on that day, we found a group of about 15 spotted dolphins which was a mix of Little Bahama Bank (LBB) and GBB residents.

During this encounter, the water was rough and the juvenile spotted dolphins seemed to be having fun as they surfed the waves and zoomed all around. We also saw Mila with her new calf Modolla and Aquarius with her new female calf Aquila.

We had a couple other quick encounters interspersed throughout the remaining days. We observed some juvenile spotted dolphin males practicing aggression on a younger male named Poptart. The three males were Destiny, Rig, and Moose (pictured below) and they tried to synchronize a lot of their behaviors. They tried to synchronize their squawks, jaw claps, and just overall movements. Could we be observing a young male coalition in the process of forming? We will have to keep an eye on them during the next couple of years. 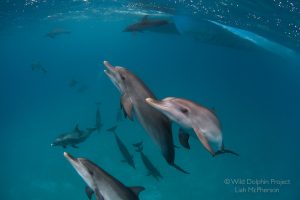 These three young males might be forming a coalition. At the bottom is Destiny, in the middle is Rig, and on the right is Moose. All three are eyeing the camera. Photo by Liah McPherson.

During a separate encounter we were able to observe some nice foraging behavior of a spotted dolphin mom-calf pair. The mom and calf pair scanned the bottom and then checked out a rock looking for some food to eat. During the encounter we heard some clicks, a type of echolocation, and then we observed the mom dive down and try to dislodge something from underneath this rock. Check out the short clip on our YouTube channel here.

Even though this trip started late and had some rough weather, we ended on a great note! We came across a few spotted dolphins; a mix of older and younger age classes. At first, the juveniles were very curious especially one we have named Moose. He swam really close to the camera and did some vertical hangs. We believe the vertical hanging position provides them with a better view of us. A little later in the encounter, Moose’s mom found a small piece of sargassum and started a game of keep away. Both she and Moose had the sargassum on their pectoral fins and eventually dropped it for the humans to pick up. Then we would dive down with the sargassum, drop it, and the dolphins would swoop in to get it! It’s always such a great experience to be able to play this game with them. We have a clip of this encounter on our YouTube channel where you can see Mira at the surface with some sargassum and Moose is trying to get it from her. She drops it, I pick it up and dive to drop it to them. Then Mira swoops in to get it. Watch the video here.

Unfortunately that’s all for now since the Bahamas remains closed to commercial boats. Hopefully we can get back out there soon!