As I am sure everyone is experiencing the impact of COVID-19 in some capacity, we are experiencing the same here at WDP. This pandemic has wreaked havoc on our summer field season. We are starting two months late, and unfortunately some people have had to cancel their trips with us (we sincerely hope you get to reschedule and join us soon!). However, we FINALLY made it over to the Bahamas on July 1st! We cleared customs and immediately took off north to see if we could find any Little Bahama Bank (LBB) dolphin residents.

While up on LBB, we did not come across any Atlantic spotted dolphin residents but we did encounter some very curious bottlenose dolphins. We came across a group of five adults and when we got in the water, they buzzed us like crazy, checking out our cameras and especially our long free-diving fins. Usually the bottlenose dolphins are a little less tolerant of us in the water so we don’t get to observe bottlenose dolphin social behavior very often. But it seemed these five dolphins were just as curious about us as we were about them. After about 20 minutes in the water one female, named Koala, went to the bottom and dug up a big piece of coral and played with it. She took it up to the surface and dropped it a few times. We tried to engage with her once she dropped it, but it seemed her companions were moving on and she no longer had time to play. Check out the photo of Koala with her coral toy below. 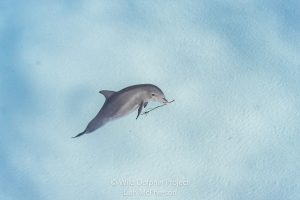 That night we tried to anchor up north a little closer to where we have previously encountered dolphins, but mother nature had different plans. This anchor spot is less protected from weather. When we first anchored it was a beautiful evening, relatively flat sees with some clouds in the distance. But those distant clouds moved in fast and the waves began to grow. We decided to pick up anchor and move down south to hide behind a reef for more protection, and a good nights’ sleep!

We spent one more day up on LBB, but were unable to find any more dolphins. So, we decided to head down to Bimini. Once there, we had a relaxing encounter with two spotted dolphin mom and calf pairs. The moms seemed to be resting, but after a while the calves started to get a little antsy and started play fighting with one another. We decided to leave them be and head to anchor.

The dolphins are usually easier to find in Bimini than up on LBB. But this trip the spotted dolphins seemed to be in different areas than previous years. We were able to find a mix of LBB and Great Bahama Bank (GBB) spotted dolphins on the northern part of GBB up by Great Isaac’s Lighthouse quite a few times. We have seen them up in this area in the past, but this is where they seemed to be hanging out for most of this trip. Up in this area, we had some great encounters and a few surprises. 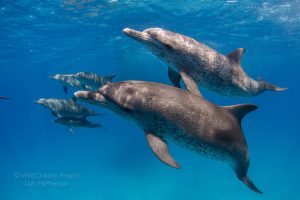 This is a photo of Tristan with Sidewalk (top) and others in Bimini. Sidewalk is another LBB resident female who came down to Bimini back in 2013. Photo by Field Assistant Liah McPherson. 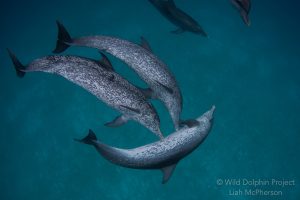 Lastly, we saw our first new spotted dolphin calf of the 2020 season! Everyone, meet Swamp, Suey’s first calf! We were all very excited and can’t wait to watch him grow up. 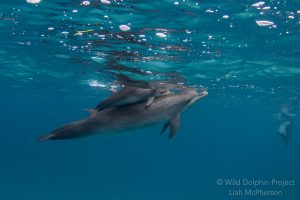 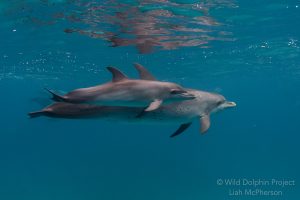 Even though COVID-19 has made our summer season short, we are making the best of it with the few trips we have and Trip #1 did not disappoint!

Stay tuned for our next blog from Trip #2.