After finishing our last trip on September 4, we hit the dock running as we prepared for Hurricane Irma which seemed to be heading our way.  Hurricanes are planned stress.  You see them coming for a long time, so preparation happens in stages of need.  The first thing we did is to back up the last of our field season data (which we do between every trip anyway for this very reason) to get it ready to box up and ship out to an out of state location.  This is a procedure we follow every year to insure our data is safe somewhere other than Florida.  Then we prep the boat to either get hauled out of the water, or to run somewhere.  This involves fuel, cleaning out refrigerators so when power is lost, biological experiments don’t happen. The already weary boat crew spent the week prepping and by mid-week we were moving our boat down to another location to secure it for the hurricane. 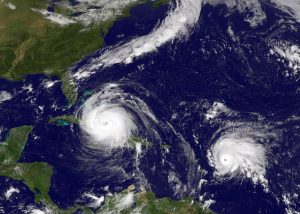 The next step is securing the office with hurricane shutters, covering things with plastic, packing up hard drives and such. Then we move to our homes to do the same.  I evacuated my home since I live on the beach, and went inland to a friend’s house with two cats and my valuables.  While watching the storm, predicted to run up the East Coast of Florida, I also thought about the dolphins.  Could they take another hit? In 2004 we lost 30% of our dolphins after Hurricanes Frances and Jeanne.  Last year Hurricane Matthew made a direct hit on West End, near our study area, after narrowly missing Florida.  As Hurricane Irma moved more west than expected, I breathed a sigh of relief as it cleared our study area and also missed the East Coast.  We still got the ferocious feeder bands with winds of 90n mph and tornadoes, but at least we missed the eye.  And I am happy to report that we had no major damage to the boat or office, or our homes.  We won’t know how the dolphins faired until next spring when we begin our 2018 field season, but you can be sure they at least had some great waves to surf!!

In 2016, WDP took hurricane supplies to those in West End who suffered loss and devastation from Hurricane Matthew. Watch the video from the first of two trips here.

Your ticket for the: Hurricane Irma