Trip 2 is in the books! For the majority of this trip we had some harsh winds from the northeast. Knowing that we were going to have some weather for most of the trip, we decided to book it down to Bimini first thing Wednesday morning to give us the best chance at finding dolphins. Bimini provides us a little more shelter from the wind than does Little Bahama Bank.

We pull up anchor Wednesday morning and pretty quickly see a large dark shadow in the water. We inch closer and realize it’s a good size tiger shark! Our first mate and one of our field assistants hopped in to have a look. Keeping respectful distance from the large shark, they were able to tell it was a female. But she was skittish and didn’t get too close so they got out of the water and let her be, and off we went towards Bimini.

We had a long day of travel, but we always seem to be able to catch some dolphins on the way in to anchor. And sure enough we had three come leaping to the bow! The water was a little rough already because of the wind, but we put guests in the water and everyone got to see some dolphins! It was a promising way to start the trip, since we knew rough seas can prove to be tough to find dolphins.

For the next 2 ½ days we got skunked, no dolphins. But we were able to keep ourselves occupied. The interns had an ID book to work through- which they completed with flying colors! We also had a few presentations throughout those slow days. I gave a presentation about the Wild Dolphin Project to get everyone up to speed about our history and what are future directions are. Tyler, our first mate, gave a shark conservation presentation. This presentation proved to be very helpful because on a few of our snorkel excursions we saw some sharks. Thanks to his talk our snorkelers knew to stay calm and watch how the sharks behave for any signs that should get out of the water. Lastly, we had a mini concert out on the back deck since we had Country Singer/Songwriter Ryan Cook on board. It was a nice change of pace, and I recommend that people check out his music!

After those few slow days, the winds died down ever so slightly and we were able to punch it a little north to where we always seem to find them and there they were! It was a great encounter. There was some juvenile aggression, and the dolphins found a sea cucumber to play with. They were buzzing that sea cucumber like crazy- poor thing! 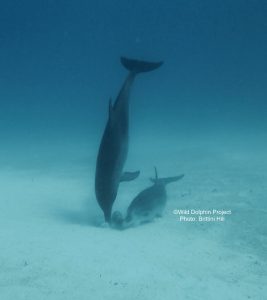 Two spotteds playing with a sea cucumber on the sea floor

After this encounter, the next couple of days were dolphin filled! We had some large traveling groups that we were able to get some drone footage of and plenty of ID’s which gave the interns and field assistants plenty of work. For some of the other encounters, we had some very playful dolphins. Sargassum (a type of seaweed) is their toy of choice. For the last encounter of the trip, we had a larger group that eventually split off and left us with to juvenile females who we call Littleprawn and Sycamore. These two were very much in the playful mood! Toting around sargassum, dropping it in front of us as a tease since they would gracefully swoop back in before we could pick it up. It was a wonderful encounter to end the trip! 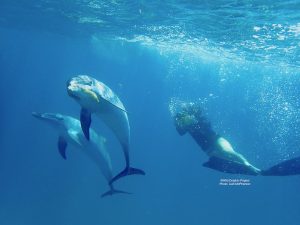 So even though the trip was slow in the beginning we were able to make up for it in the last few days! Dolphins everywhere! We hope this streak continues into Trip 3. 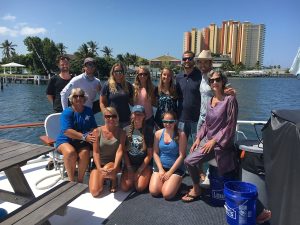