On our most recent trip to the Bahamas, we had the incredible chance to view a relatively rare marine mammal — the false killer whale (Pseudorca crassidens).

These sea wolves are social, intelligent, hunt in packs, and are found in deep offshore waters. They are also entirely black. Adult females reach lengths of 16 feet, while adult males are almost 20 feet long. As adults, large false killer whales can weigh up to 3,000 pounds, according to NOAA Fisheries.

In the Hawaiian Islands, their population, which numbers around 200, is listed as endangered under the Endangered Species Act. It is the only false killer whale population protected under the ESA. This stock is also listed as depleted under the Marine Mammal Protection Act (MMPA).

Like the killer whale, these “whales” are actually in the oceanic dolphin family, Delphinidae, a group made up of about 36 species, including the two species we study in the Bahamas, the Atlantic spotted dolphin and bottlenose dolphin.

When we saw the false killer whales on our recent trip, we weren’t sure at first if was a pilot whale or not, as the two species look similar and we also see pilot whales when crossing the deep waters of the Gulf Stream from Florida to Bahamas. However, upon closer inspection, WDP research assistant Cassie Volker Rusche noticed the narrower dorsal fin, compared to the broader and more round dorsal fin of the pilot whale. False killer whales also have a narrower face. 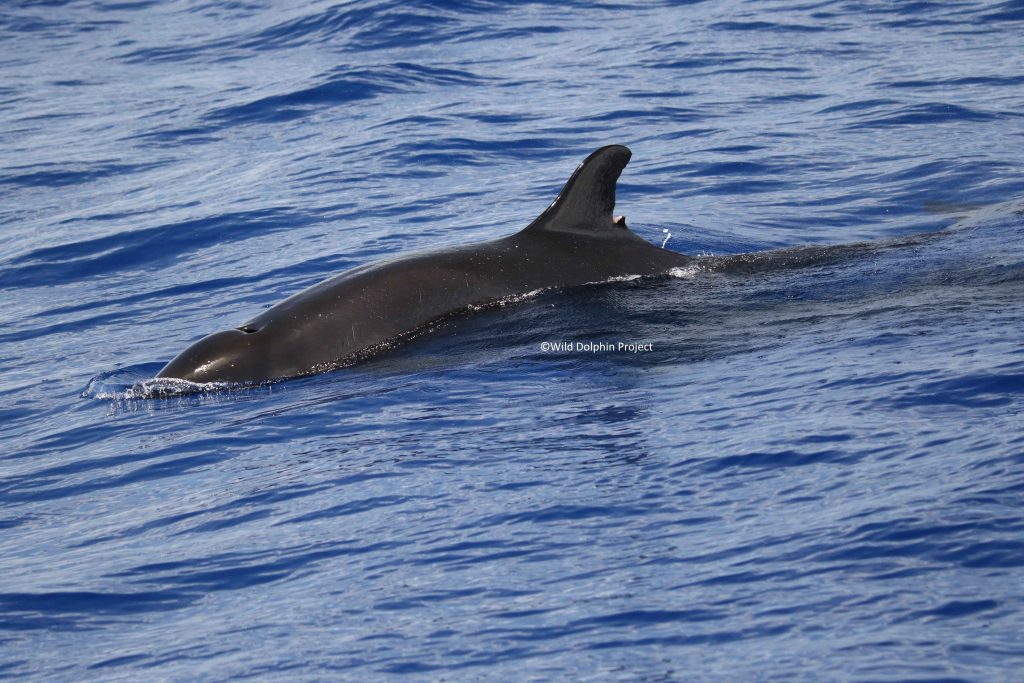 A large group of traveling pilot whales, including a mother and a calf, show up at sunset in the Gulf Stream. Copyright Wild Dolphin Project.

“I was so excited because this was my first time seeing false killer whales, so I had another marine animal I could check off the list. They were checking out the boat, and while they were bow-riding you could hear them whistling from the surface!” said Cassie.

Years ago, we stumbled upon a group of false killer whales that had been hunting. They would take bites of the large bloated fish at the surface, and leave the gills behind. Squid and fish are typical prey for false killers, and they can dive to depths of 300 to 500 meters to hunt, holding their breath for up to 18 minutes, according to NOAA Fisheries. 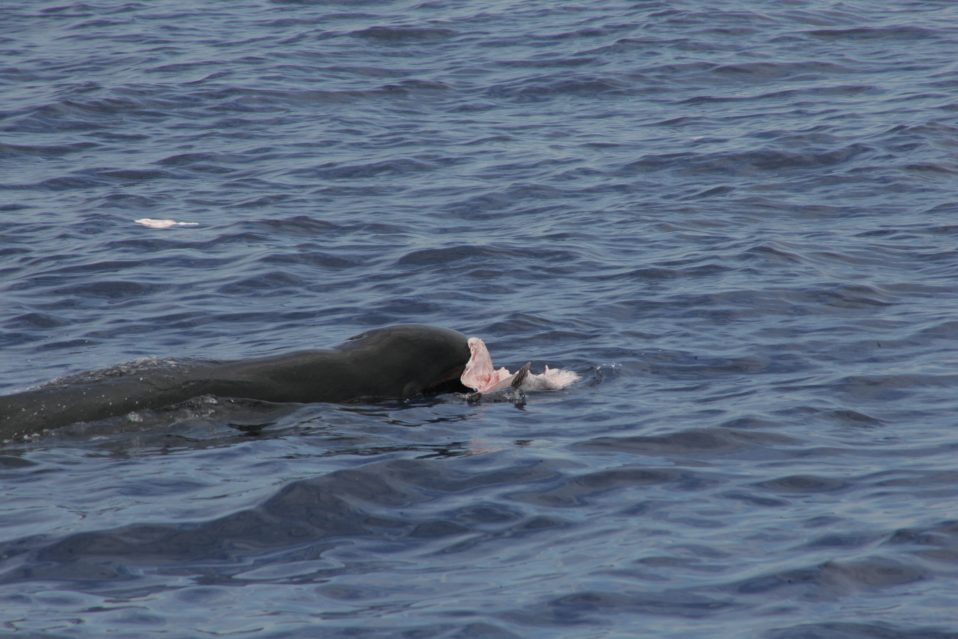 Unfortunately, false killer whales are threatened due to interactions with fisheries when they take the bait off fishing lines and then get entangled. The false killers in Hawaii have a lot of dorsal fin and mouth injuries, likely due to this effort of snatching fish off fishing lines. In other parts of the world, such as Indonesia, Japan, and the West Indies they are hunted.

At the time of a 2016 study by the WDP, ours were the only reported sightings in Southeast Fla., in the scientific literature. There is certainly a need more studies of these difficult to study cetaceans in this region.

In 2016, Dr. Cindy Elliser and Dr. Denise Herzing published a study about these opportunistic sightings of other marine mammals in the Journal of Northwest Atlantic Fishery Science. (To view the study click here.)

Former Blog about other sightings: More than Spotted Dolphins

Your ticket for the: Bonus Sightings : False Killer Whale or Pilot Whale