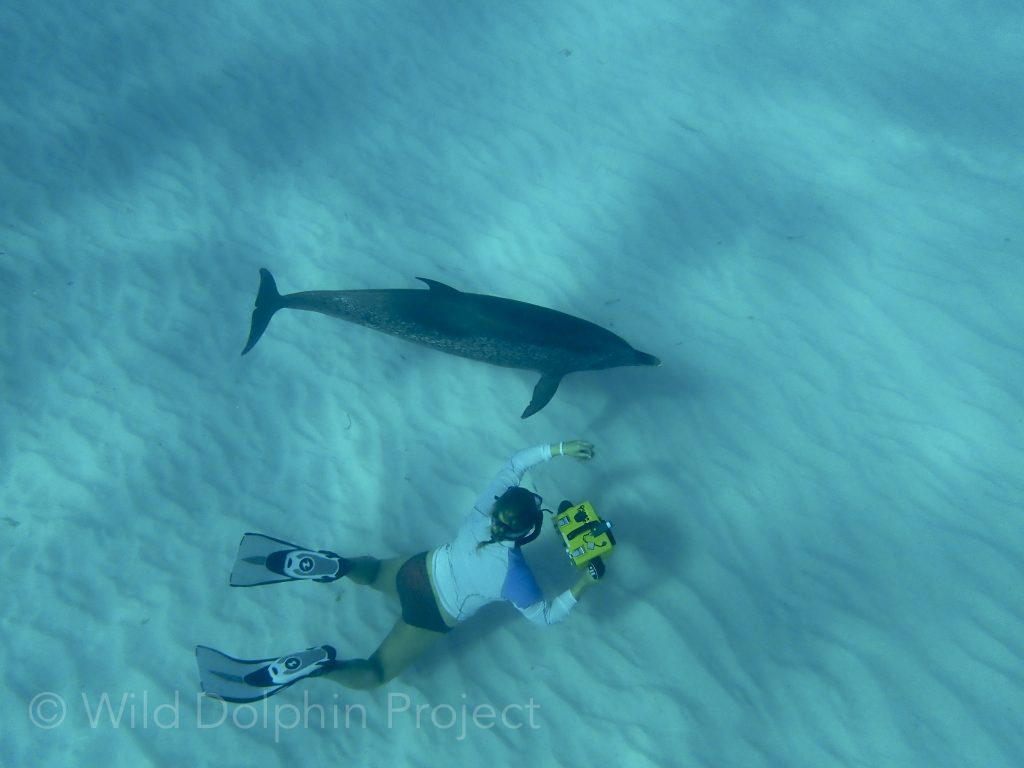 Cassie Volker spends her summer living on a boat in the Bahamas studying wild dolphins. But 10 years ago, she thought she’d be working as a pharmacist.

Volker grew up in Cincinnati, Ohio playing soccer and taking frequent trips to the nearby zoo, which fostered her love of animals. She and her family weren’t necessarily outdoorsy, but her mom also loved animals and the Discovery Channel was always on around the house. “We didn’t camp or hike, but we spent a lot of time at the beach,” said Volker. And her favorite activity at the beach — shelling. Volker has a collection of shark teeth, conch shells, urchins and other little treasures from her time searching the sand.

When it came time for college, Volker attended Northern Kentucky University and majored in biology as a pre-pharmacy student. However, after just a few short months and also working in a pharmacy, she realized it was not for her. Eventually, Volker discovered that her real passion was understanding animal behavior. So, she switched to the ecology/evolution/organismal biology concentration.

After graduating NKU, Volker moved to South Florida to work under Dr. Denise Herzing, an affiliate professor with Florida Atlantic University in Boca Raton, and the founder and research director of the Wild Dolphin Project. WDP is the world’s longest running underwater study of dolphins in the world. Since 1985, the team spends months out at sea every summer, living on boat, and studying two species of dolphins that live on the shallow sandbanks of the Bahamas, Atlantic spotted dolphins and Atlantic bottlenose dolphins. Researchers have made many discoveries over the year regarding aspects of social structure, paternity, habitat use, behavior, communication and movement patterns. For her thesis work, Volker studied aggression.

WDP’s Bethany Augliere sat down with Volker to chat about what it’s like to live on a boat in the Bahamas studying wild dolphins, interesting results from her research, and her advice for aspiring marine biologists.

How did you end up working with Denise Herzing at the Wild Dolphin Project?

CV: I wasn’t sure what kind of job I wanted after college, even though I was majoring in biology. So, some of my friends suggested I get involved in research to see if that was of interest. I saw a job posting for an animal behavior position with one of the professors, Lindsey Walters. She studied parental care in house wrens and Carolina chickadees. I went to work for her, observing the wild birds in the field, their nest boxes, and fell in love with the work. I even got to help band baby birds. I ended up working with her for 3 years, until I graduated. 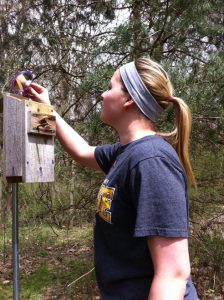 Volker observes a Carolina chickadee nest box as part of her undergraduate research.

After college, I started searching for professors doing animal behavior research. I found Denise Herzing, and contacted her, asking if she was accepting graduate students, while explaining my interest in her lab and my previous experience. She told me she was accepting students and interested in my application. I sent her my GRE socres, a statement of purpose and applied to Florida Atlantic University. I got accepted into the university and she accepted me as a student.

What about animal behavior interests you?

CV: For me, I’ve always loved animals and behavior is interesting because you’re trying to figure out why animals are doing something, like fighting or vocalizing. And when you study behavior, you often uncover more questions to answer than you started out with! 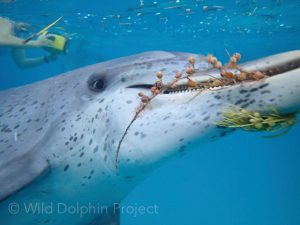 What about aggression in spotted dolphins did you study??

CV:  Specifically, I wanted to examine the differences and similarities in behaviors used when male spotted dolphins fought other spotteds and compare that to when spotteds fought the larger bottlenose, which also live on the sandbank.

I ended up finding differences. Basically, the spotted dolphins used more risky behaviors when fighting bottlenose dolphins, like chasing and biting, which requires close contact. The question is why? Why choose riskier behaviors and risk injury? We can’t know for sure, but it’s possible they might just have to put more energy into fighting a larger animal or use more overt behaviors to make their intention clear.

Why are these two species even fighting?

CV: Again, that’s not something we know for sure, but we suspect it’s over reproductive opportunities. It’s possible that bottlenose and spotteds can hybridze in the wild, and Denise has seen spotted males trying to mate with bottlenose females and vice versa. Fighting could be a way to protect and maintain your species, without other barriers like geography or genetics.

During these big interspecies fights, females are always around on the periphery of the action. Based on prior research from other graduate students, we know they aren’t competing for food or territory. The reality is though, that we just don’t know why they fight.

As a research assistant, what are some of your responsibilities?

CV: During the summer, I’m living out on our research vessel in the Bahamas. I get up at 7 am to make sure all the gear is ready, put on my sunscreen, and change into a bathing suit so I’m ready to go. Then throughout the day, I’m on rotating shifts of ‘Dolphin Watch’ to watch for dolphins. When we find dolphins, I’m in the water either taking photo-identification shots of the animals or using a video camera to record underwater behavior and vocalizations. At the end of the day, the crew reviews and logs video from the day, and I also work with other graduate students or interns to label all the photographs, identify dolphins, and enter data.

In the winter months, or the off-season, I’m managing the database — and getting ready for the next field season. I also give talks about our work to local schools and nature centers. 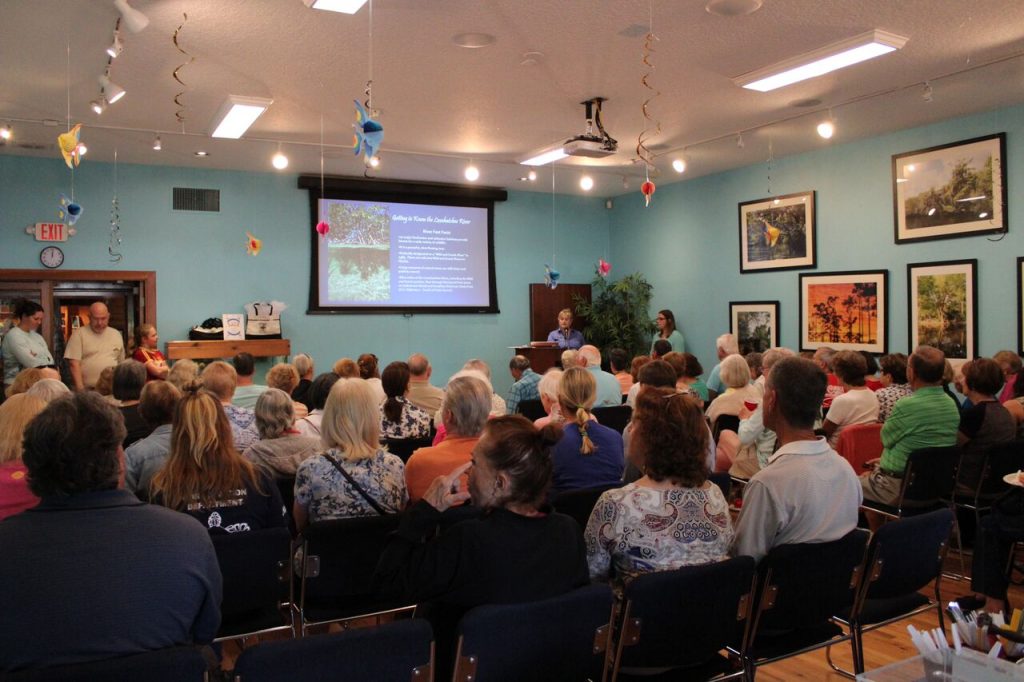 Volker gives a talk at the Loxahatchee River Center in Jupiter, FLorida.

So what’s it like when you don’t have dolphins? 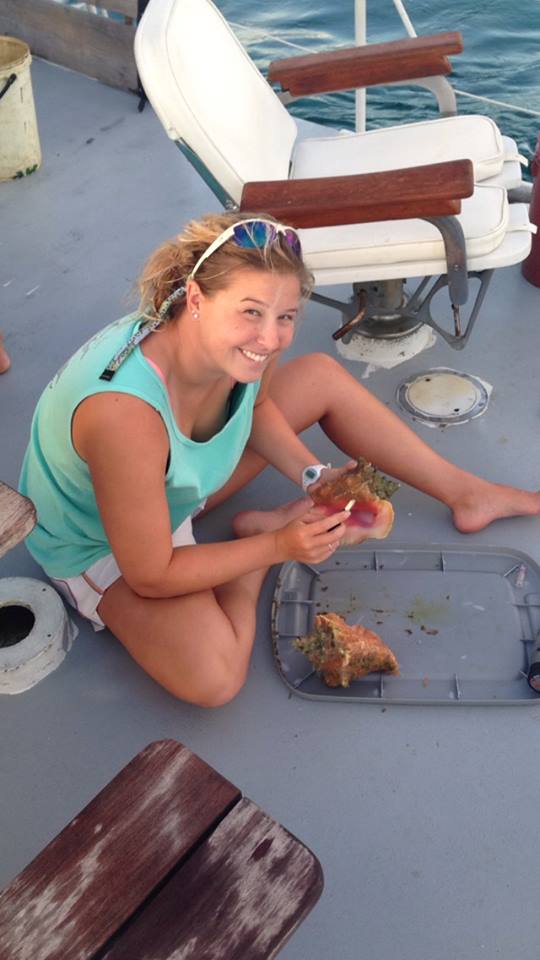 Volker cleaning empty conch shells she found while snorkeling around the anchored boat.

CV: We don’t always have dolphins, so there can be a lot of downtime. If there’s no work to be done or data to be entered, I often read in my bunk. Sometimes, we take snorkel breaks on shallow reefs and shipwrecks. When we are anchored before setting off to survey for the day, or at the end of the day, I also like to go shelling around the boat.

At night, if we don’t have any data from that day, we watch movies, play games, like charades, or do riddles. It’s also nice to just relax outside and look out at the water and watch the sunset or storms in the distance. We have a lot of good conversations on the boat, without TV, internet, or smartphones.

Do you have a favorite memory with the dolphins?

CV: Yes. There was one time a young female, named Nova, came up to me. She’s always been very curious and playful. She swam right in front of me, tail facing me, so we were both facing the same direction. Then we sort of played this game of peek-a-boo, if that’s how you can describe it. I’d pop my head to the right to look at her, and she’d tilt her body to look back at me. Then, I’d pop my head to the left, and she’d shift her body to look at me that way. Whenever I see her, she also seems to do this thing where she hangs vertically in the water column in front of me, checking me out. She’s just a fun dolphin. 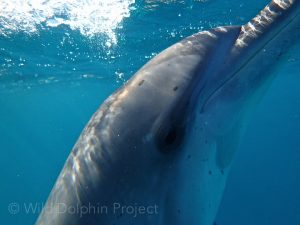 Nova, a young female Atlantic spotted dolphin, is one of Volker’s favorites. Photo by Volker.

How do you identify her?

CV: She’s young so she doesn’t  have a lot of spots [spotted dolphins gain spots with age] but she has one large black spot right above her right eye. She’s also got these distinct melon marks, which are the lines that extend from their rostrum up to their eye. And she has a pretty mangled fluke.

What’s the hardest thing about living out at sea?

CV: How do I say this the right way, being on a boat with people for 10 days in close-poximity — it can be hard. If you’re in a bad mood or just having an off day, there’s nowhere to hide and you’re still at work, all the time. When I need space, I just go into my bunk for a few moments and close my eyes to decompress. It can be hard to be away from land and my family, boyfriend and cats, Suri and Luna. 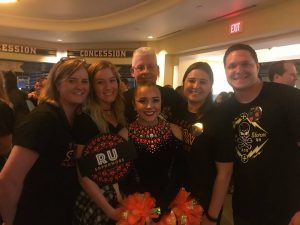 Volker with her family and boyfriend Brian (far right) at her little sister’s national dance competition in Orlando in February. 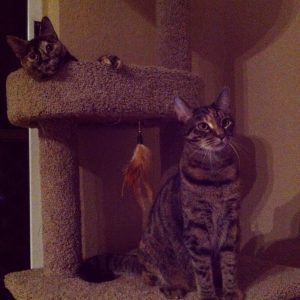 Do you get seasick?

CV: Not really, but there was one time I got sick in the middle of the night, and it was pretty terrible.

CV: Well, we were up at the Dolphin Wreck, which is this pretty remote region of our study area that doesn’t get a lot of protection from the elements. During the night, the wind started to pick up and it got rough. Slowly more and more people on the boat started coming outside, feeling sick and not being able to sleep. Eventually, our captain decided we needed to head south and find a spot with more protection from the waves.

I got really, really sick. I was laying on the bench up on the bridge of the boat, had a towel over my head and bucket by my arm. It was windy, rough, and the spray of the water would drench us every time the boat smacked down on the water with the waves. Denise loves telling this story because she remembers a specific moment when I lifted the towel off my head and said “Come to the Bahamas they said; It’ll be fun they said.” That was a rough night.

What do you recommend for high school or college students who want to get into marine biology research?

CV: Well, definitely getting research experience as an undergraduate so you can start to figure out what about a certain animal interests you. What kinds of questions do you want to answer — do you want to work in a lab with a microscope or work out in the field? It’s also important to do well in school, and have organizational skills, as well as being detail-oriented and observant.These days, it’s also valuable to have a basic familiarity with technology and photography/videography.

If you want to get into the marine field, I suggest having strong swimming and snorkeling skills. I couldn’t do this job if I wasn’t comfortable in the water. 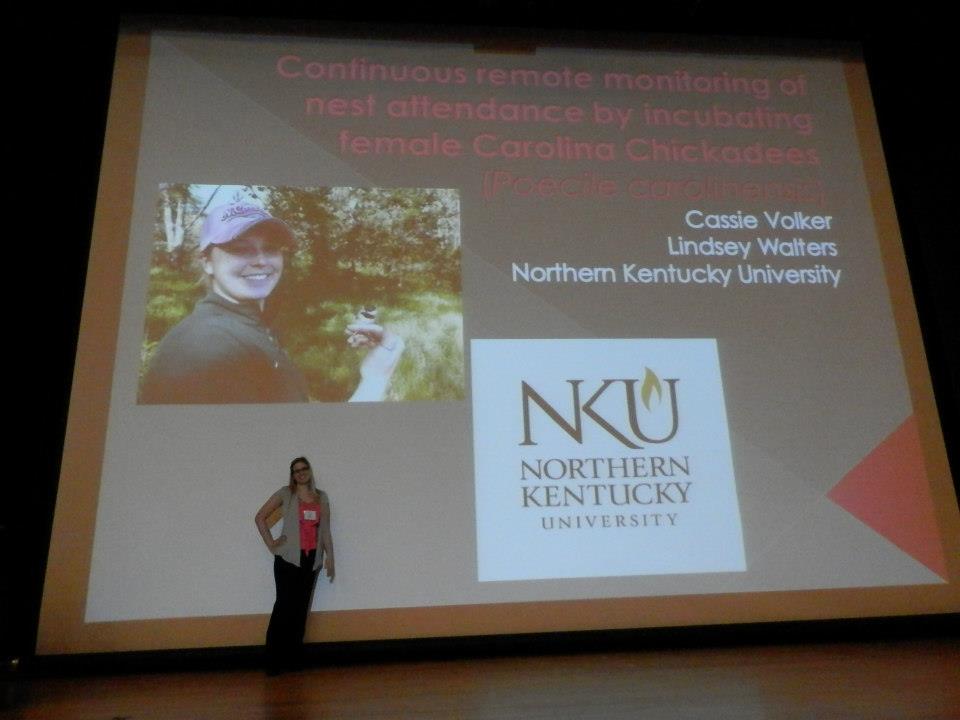 Volker presenting her undergraduate research on parental care in birds at the Wilson Ornithological Society meeting at the College of William and Mary in Williamsburg, Virginia, March 2013.

Your ticket for the: Meet the Team: Research Assistant Cassie Volker