Following an almost non-existent 2020 field season due to COVID-19, we were anxious to start this year.  We did not have a full 2021 field season however, because every season has its bumps. But we did gather basic life history information and we saw plenty of dolphins!

We saw a total of 106 individual dolphins from both the Great Bahama Bank (GBB) and the Little Bahama Bank (LBB) groups, which is about 57% of our entire study population. This summer we did not get up to LBB at all, so all of the LBB individuals we encountered were ones that moved down to GBB.

As always, we were excited to see new calves at the start of the season. However, this season was a bit more interesting since we missed a lot of the animals last year due to so little field time. As a result, we had calves from two summers to figure out! The calves can be difficult to identify since they don’t have any spots until about three years old. Atlantic spotted dolphins are born without spots and gain their spots with age. That’s why it’s important for us to observe the calves as soon as we can because it helps us figure out who their mom is, since they stick so close to their moms early on.  We often use coloration patterns on their flanks, melon marks, or any small scratches, nicks or notches for identification. 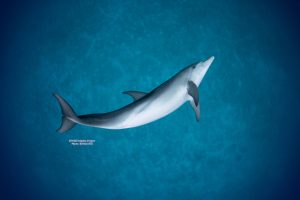 This calf is Nesta, and she is easy to identify in the water because of her dark grey line that separates 2 areas of white on her flanks.

This summer we had 8 new calves; 5 LBB calves and 3 GBB calves. Based on the size of the calves, three of the five LBB calves were actually ones that we missed from the 2020 field season. The three GBB calves were the offspring of the three females (Duchess, Arugula, Polaris) that we saw VERY pregnant during our November trip last year (blog). One of the LBB offspring, Nesta daughter of Nereide, is another 4th generation calf (blog)! And this summer, we saw a total of 18 females who were pregnant, therefore we are probably going to have even more calves next season!

In regards to the behaviors we observed this summer, it was juvenile heavy. The juveniles were very playful and curious but were also observed practicing courtship and aggression. The younger animals need to practice certain behaviors because they need to learn. Dolphins are not born with all the necessary social skills they will need throughout their lifetime, so they play and practice to learn what to do. During the play encounters, the juveniles played with plastic quite a bit this summer (blog). Whenever they dropped the plastic we tried to grab it before they could so that it was not accidentally ingested. They were not very happy with us when we took away their “toy”, but we always tried to swap it for one of their natural toys such as sargassum. 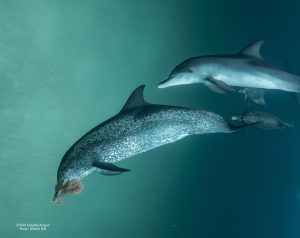 A fused female and her calf play with sargassum.

We saw some adult behavior such as interspecies aggression and courtship, but mostly they were in big traveling groups. 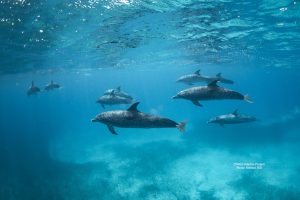 The interspecies aggressive encounter was a large group of about 30 spotted dolphins and 6 bottlenose dolphins. It was in murky green water, but they were very vocal and they performed a lot of aggressive behaviors such as open mouth displays, head to head stances, and they often charged into one another. 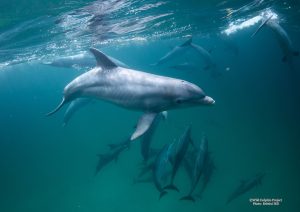 This photo was taken during the interspecies aggressive encounter. The bottlenose dolphin is front and center with a lot of spotted dolphins in the background.

It was great to get back out into the field, but as always it went by too quickly! We are currently back in the office working through the information we gathered. During the off-season, we will be gearing up for next summer as always, but we are now preparing for our Fall Wild Ocean Science virtual event. This event will be held on Saturday October 9th, check out this LINK for more details.

Your ticket for the: 2021 Field Season Summary