Drew’s heart has always belonged to the natural world, but by age 23 he joined Shearson/American Express and found himself on Wall Street for the next 20 years where he developed into an investment manager specializing in pattern recognition and what is now known as algorithmic trading at Prudential-Bache and UBS. 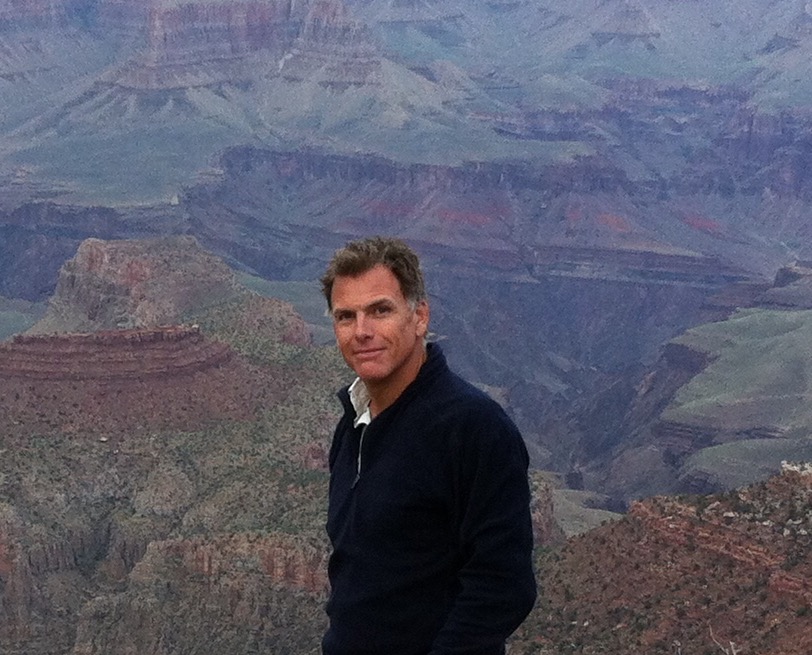 However, in 2004 he was retired and searching for ways to connect back to science and nature, especially dolphins and whales.  He was checking out books at the local Barnes & Noble in South Florida, and found a signed book by Denise Herzing, Ph.D., founder and director of the WDP. Then he saw that she was based right in Jupiter, Fla. He called her up the next day to volunteer and the rest is history!

Now, he’s the Vice President and has been on countless research expeditions, and even shared the experience with his adult children. “WDP is a great fit for me, it engages my heart and mind… these amazingly intelligent animals and some of the world’s top scientists working together, using cutting edge technology toward exciting breakthroughs. It’s a privilege to be included.”

Drew is always helping out and assisting us with gear, technology, and generally just fun to have aboard! If we’re on a snorkel break – he’s the first one in the water and the last one out.

Read more about how Drew got involved with WDP and some of his favorite experiences over the last 18 years. 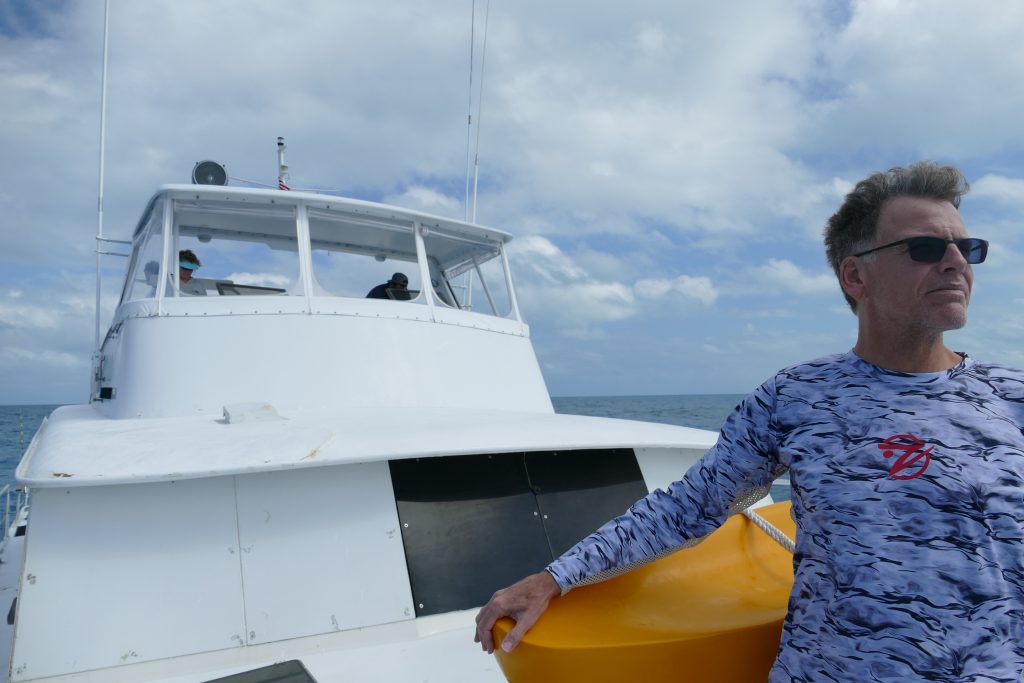 Drew on the R/V Stenella.

How did you get the attention of Denise, when so many people want to volunteer with WDP?

DM: I called up and spoke with the office administration and mentioned my experience with pattern recognition using computer algorithms, and Denise got on the phone right then and there. We chatted a bit and then she asked for my resume, which I immediately faxed over. Then, she asked if I could come meet her at the office the next day and I did.

What was your first research expedition like to the Bahamas?

Any memories or experiences that stand-out over the years?

DM: There’s been a lot. I remember one of my first trips I was observing a big aggressive group and there was this big huge scarred up male bottlenose dolphin — I think his name was Nightmare. And then spotted dolphins were using us humans almost like a shield from the bottlenose. And eventually, this coalition of males surrounded me and it’s me and them facing this big bottlenose dolphin. That was incredible. It sends chills down my spine right now just thinking about it because it was just such a big, intimidating animal.

Another memory was when we were coming back from the Bahamas, coming close to the deep water of the Gulf Stream in about 1,500 feet of water. And, all sudden the captain cut the engines. We could see on the surface these huge Goliath groupers,  flopping around with their eyes bulging out of their heads. Then we see a fin come up, a black fin, pretty tall and a spout, and then another one, then another one. It was a pod of false killer whales. They were swimming down — because Goliath groupers live on the bottom —  finding them, bringing them up until their swim bladders popped, then they proceeded to eat them leaving nothing but the gill plate. One of the scientists on board put his hydrophone in the water to get some of their vocalizations. They started scanning the boat and you could feel it. They were in the water but you could feel the boat vibrating from their vocalizations and echolocation. It was amazing.

I’ve also had the chance to have my son and daughter join me on the trips. That’s been the best. As a parent, watching my daughter see dolphins for the first time was better than it was when I saw them for the first time myself. My son has even joined as a first mate, and that was just a blast. Even though nothing particularly unique happened on those trips, it was spectacular every day just having them out there with me.

What’s your goal as Vice President?

DM: You know, if I have something to contribute, I do. We have some very smart, experienced and well-intentioned people on the board. So, occasionally I give my two cents and I think we make some pretty good decisions. This project has been around for almost 37 years.

What was your experience working with nonprofits before coming to WDP?

DM: In 1991 (I think it was) I co-founded the American Association of Individual Investors in Palm Beach, and took it from about 200 members to 2,500 members. I was president for five years and it was a very successful group, it was a lot of fun.

There was a little science involved in that because it was just about the time when computers were being used more in analyzing and trading the market. And in addition to my role as president, I chaired a special interest group on computer aided investing, where I shared with them some of my pattern recognition algorithms, which was algorithmic trading before it was called algorithmic trading.

So, what’s your favorite part of being a part of the wild dolphin project?

DM: My favorite part of course has to be the dolphins. There’s nothing like it. Everybody involved with the Wild Dolphin Project will tell you the same thing. We’re here for the dolphins. We want to see them survive. We want to see them thrive. And if by chance were able to be smart enough to communicate somehow with them eventually, then that’s the golden ticket! But I love the people I work with, I’ve made some fantastic friends. I love being around geniuses, and it’s my chance to hope some of it rubs off on me! 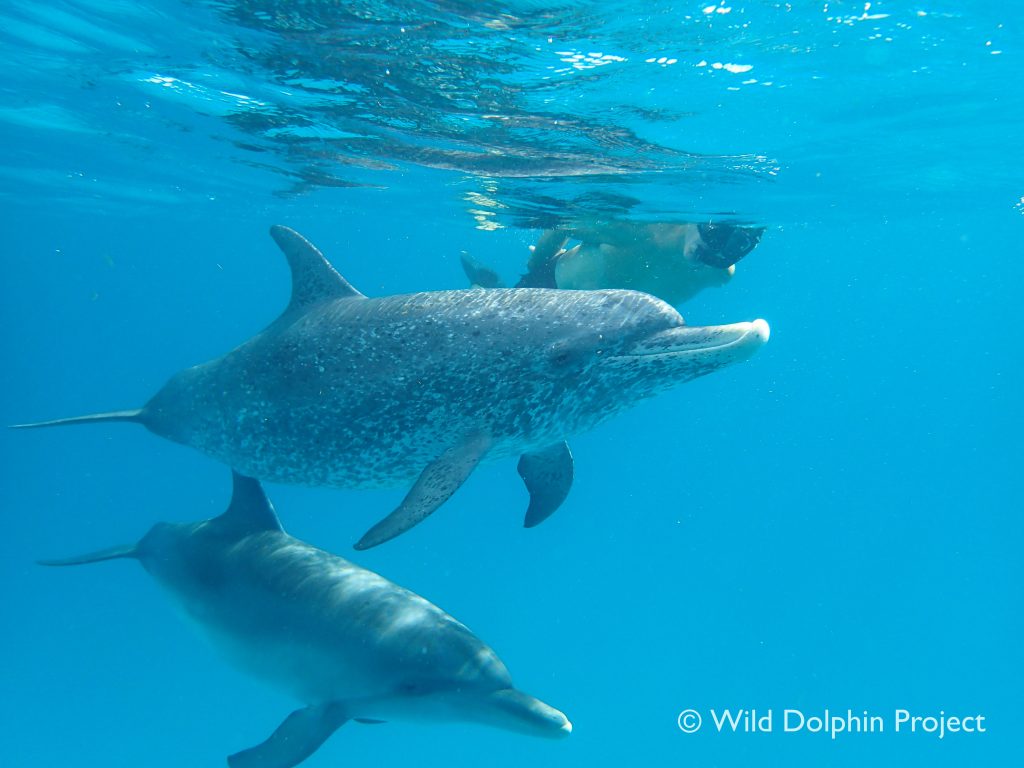 Drew swims alongside two spotted dolphins in the Bahamas 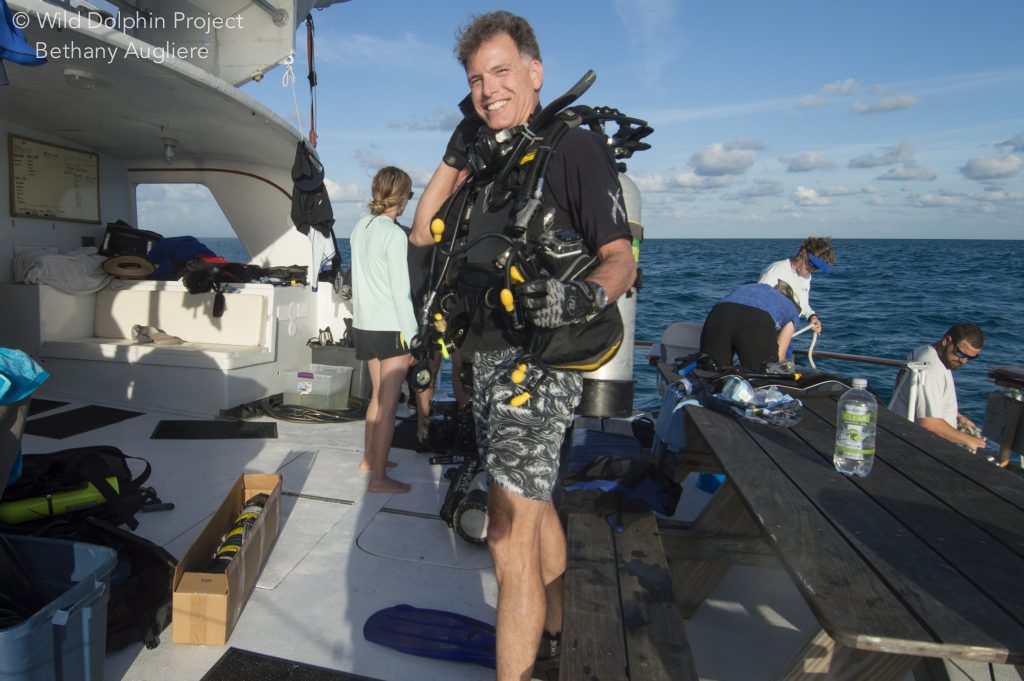 Drew getting ready to help deploy our passive acoustic listening monitors in a remote area of our field site.

Your ticket for the: Meet the Board: Vice President, Drew Mayer