Wild Dolphin Project > Media > Blog > Research > Can Anyone Hear Me?

The Wild Dolphin Project was started by Dr. Denise Herzing back in 1985. Since then Dr. Herzing, along with her colleagues and graduate students, has put out multiple peer reviewed research papers on the behavior, acoustics, and ecology of the two species we study in the Bahamas: the Atlantic spotted and bottlenose dolphins. But over the years, she has observed behaviors that are more “rare” or are “one-offs” meaning there is not a large enough sample size in which to do a proper scientific study. However, these behaviors are very interesting and we wanted to share some of them with you. We will put out some blogs highlighting these rare behaviors and hopefully you enjoy learning about them. This will be a blog series so make sure to check back and read them all!

Cetaceans (whales, dolphins & porpoises) are known for their aerial acrobatics. They perform leaps, cartwheels, head and tail slaps, and even spins. Researchers don’t know exactly why these animals perform these behaviors but there has been speculation that the aerial displays could be utilized for many different reasons. Some of these reasons may be to get the attention of or communicate with other individuals in their group, to remove parasites or pests (check back for our “Pesky Remora” blog), aid in feeding efforts, used as aggressive displays, or simply for fun (Lusseau, 2006; Tardin et al., 2014). At the Wild Dolphin Project, we have the opportunity to observe the underwater behavior alongside the surface behavior.

On July 17, 2021 we came across a lone Atlantic spotted dolphin performing multiple cartwheels and head-slaps at the surface. A cartwheel is an out-of-water leap in which the dolphin jumps sideways out of the water, their tail is forced over their head, and their body smacks back on the water’s surface.

Figure 1. An Atlantic spotted dolphin performing a cartwheel leap out of the water.

We observed this surface behavior for 15 minutes during which we identified the individual, an adult male we call Doc, and observed a wound on his right side above the pectoral fin. It’s unusual for us to see a spotted dolphin alone, so we were curious if he was seriously injured or if something was wrong. Two researchers cautiously entered the water to observe the underwater behavior and record with a GoPro and hydrophone. When we entered the water we observed Doc hanging upside down vertically in the water column performing a lot of head rotations. After about four minutes, the dolphin swam to the bottom, briefly rubbed on the sand, and shot to the surface where he cartwheeled out of the water and then did a head-slap on the surface. During this time, we saw no other spotted dolphins in the area and we left after 35 minutes of observation. He did not appear to be seriously injured and he was breathing normally at the surface, so we made mental notes to just be on the lookout for this individual throughout the remainder of the summer and to try and keep an eye on him.

Video 1. This clip shows Doc hanging vertically and doing head rotations. Then you see him leap and do a head slap at the surface.

We later saw him on September 9, 2021 and he was seen with other spotted dolphins and appeared to be in good health. We speculate that this individual was trying to communicate with his lost group during the surface displays on July 17. Doc may have performed these specific aerial displays because they produce a loud sound as the body smacks on the water’s surface. Then while under the surface he was rotating his head as if to try and listen and locate a possible response to his noise from other dolphins in the area. We don’t know how he got separated and we only saw a minor wound on him initially, so we aren’t really sure what happened. But he has been observed on several occasions since July 17 performing normal dolphin behavior. 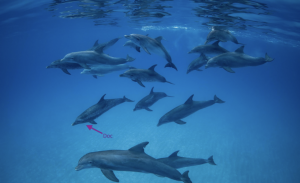 At other times we have observed similar lone dolphins scanning the water column, sometimes emitting a whistle or distress call.  For example, on July 31, 1989 we had a group of Atlantic spotted dolphins riding the bow until eventually only one individual remained. Two researchers got in the water, and when they entered they heard what seemed to be distress calls coming from the dolphin. The dolphin was also scanning in the water column and on the bottom while making the call. We speculate that the scanning occurring in the water column could be used to listen for and help locate other dolphins in the area.

Blogs in this “Rare Behavior” Series:

Join us on a research trip

Your ticket for the: Can Anyone Hear Me?