Hi everyone! We hope you enjoyed our LIVE Facebook Question and Answer session with our biologist Cassie Volker. We decided to turn that session into a blog, as a permanent resource.

As a refresher, the Wild Dolphin Project was started by Dr. Denise Herzing in 1985. Along with her colleagues, Herzing and the WDP have been studying two species of dolphins in the Bahamas — the bottlenose dolphin and the Atlantic spotted dolphin.

The Atlantic spotted dolphin is our primary study species. They are born without spots and gains spots with age. These spot patterns are unique, like our fingerprints, so no 2 dolphin have the exact same patterns. That’s how we can tell them apart, by tracking their spots over time, as well as any scars, and nicks and notches out of their fins. Our work is non-invasive, which means we do not feed, touch or even tag the animals. We try to study them while letting them remain as wild as possible, hence our motto, “In their world…on their terms”. We have learned a lot about these two species, such as what they eat, and what they like to play with, where they go, how they communicate, and their social relationships.

Some other facts about dolphins before we get started: 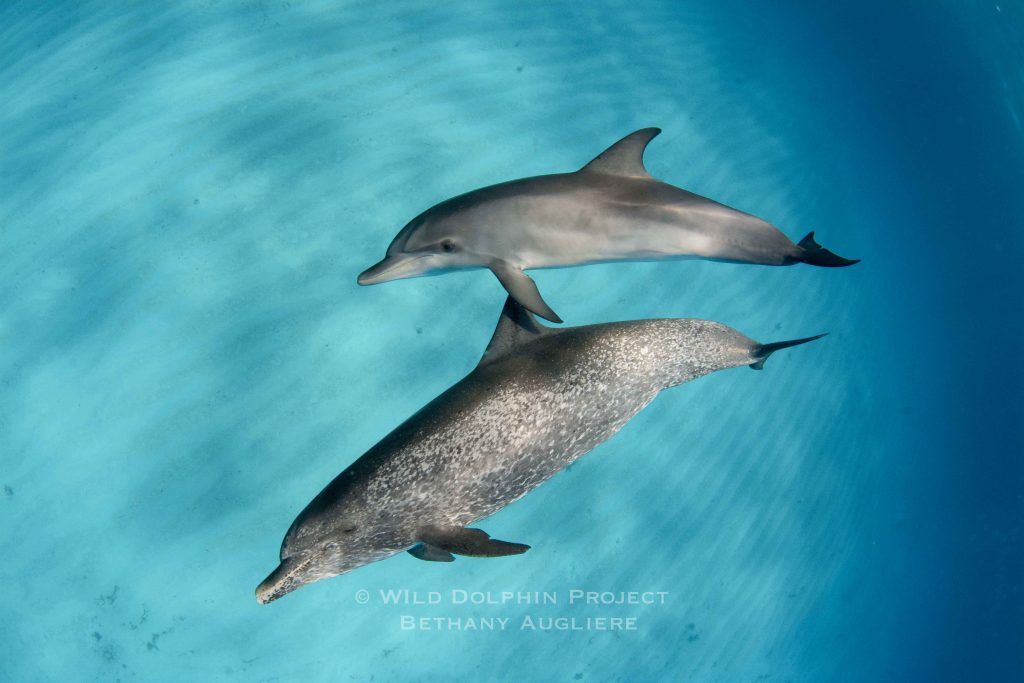 An adult Atlantic spotted dolphin with her calf, who will gain spots with age.

First, how exactly did Cassie become a marine biologist? (This is a common question)

While there are many paths to becoming a biologist, they all have one thing in common: education and experience. Cassie always loved animals, and had a particular interest in why they do what they do. She knew she wanted to study their behavior. She went to Northern Kentucky University for her undergraduate degree in biology, and also did research on how parent birds take care of their babies – in the (Carolina Chickadee). She did this research with the scientist Dr. Lindsey Walters.Gaining research experience as an undergraduate is useful to help define your interests, as well as figure out if you actually like research! It’s definitely important if you decide you want to go to graduate school!

After her undergraduate degree,  Cassie knew she wanted to continue with her studies and learn more about animal behavior. She discovered the work of Dr. Denise Herzing and the WDP. Herzing is affiliated with Florida Atlantic University, so she applied and got in. With Herzing as an advisor, Cassie studied the aggressive behavior of Atlantic spotted dolphins. After graduating in 2016, she then went on to work with Herzing as her full-time research assistant. Over the summers (May – September), she’s out in the Bahamas for fieldwork collecting data. The rest of the year she works in the office,  managing the database and helping with research.

How long can dolphins live?

How big can dolphins grow?

How long do they stay underwater?

How deep can they swim?

How fast do dolphins swim?

How high can they jump?

What do they eat for dinner?

How many dolphins are in a normal pod?

How long does a baby dolphin stay with it’s mother?

Do dolphins alloparent like elephants? This means, do other dolphins aside from the mom take care of a baby?

Do daughters hang out with their moms even after starting own family.

In the Bahamas, spotted dolphins and bottlenose dolphins tend to associate with females associate based on their life stage. So for instance, pregnant females hang out with other pregnant females. Females with calves hang out with other females with calves, and teenagers hang out together. Having said they, older female calves will also hang out with their moms to help babysit and gain practice with calves. Females will also tend to hang out preferentially with their family members. So, if a mom and a daughter both have calves at the same time, we often see them together. This is not uncommon for many dolphin species.

Do the dolphins you have been following recognize any of the members on your research team? 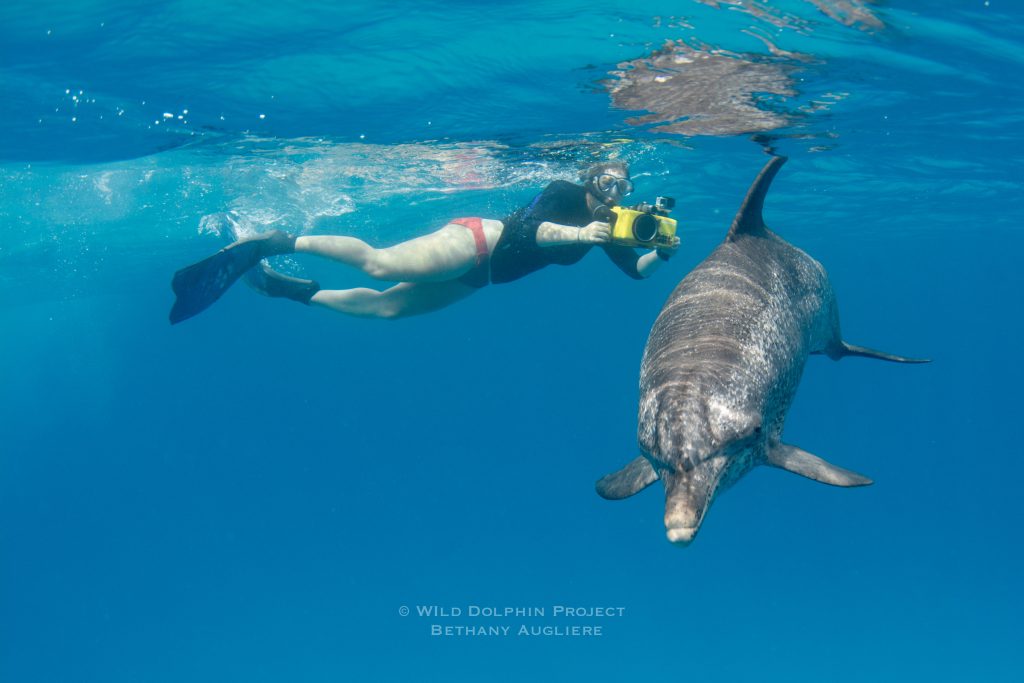 Watching the day’s video and logging what is happening for our electronic video database. 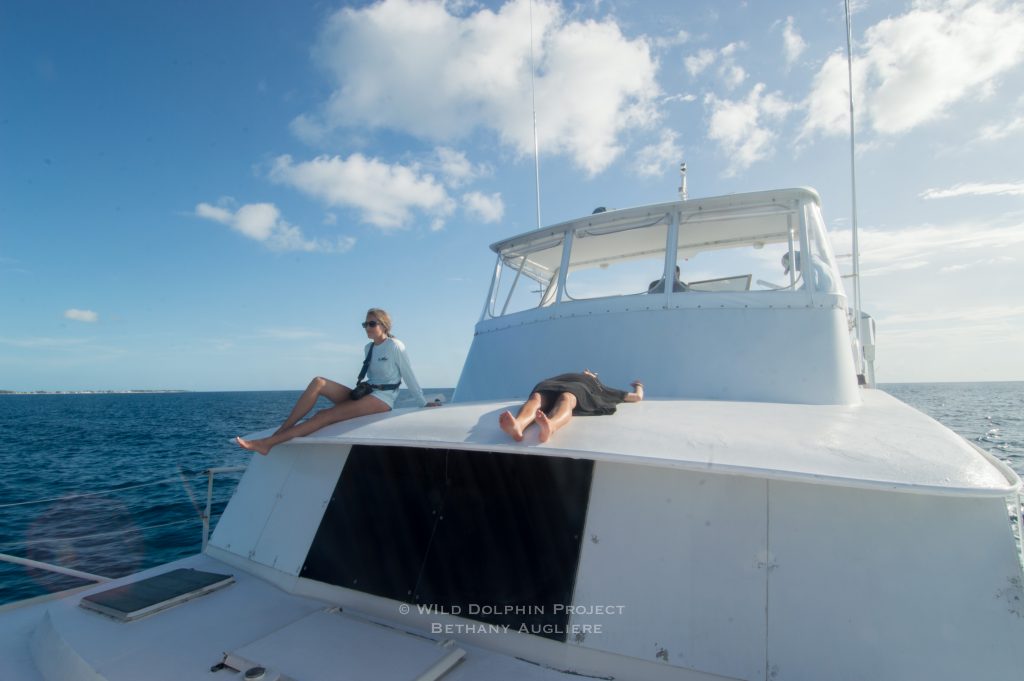 Looking for dolphins….the days can get long! 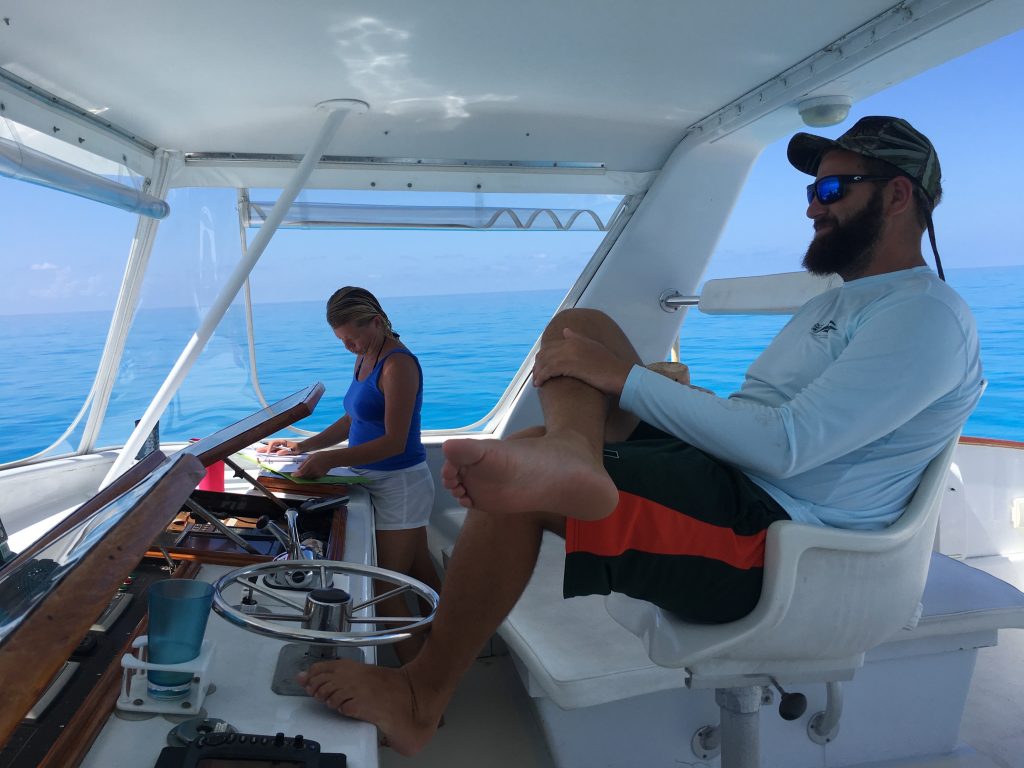 Dolphin Watch up on the bridge with the captain.

How long can dolphins live out of the water?

Are there other areas you would consider doing research?

As of your 2019 season, how many new calves did you have in the community?

To help support our work,  consider becoming a member or making a donation.

Check out ways to participate if you are interested in joining us on research expeditions in the Bahamas, as a passenger or student intern.

Your ticket for the: QandA with Biologist Cassie Volker