This summer we observed many dolphins in our population with wounds. We try to keep track of scars and wounds because they can be used as identifiers throughout a dolphin’s life.  Usually a few dolphins each summer receive a new nick or scratch, but this summer we had at least 19 individuals with mentionable wounds.

Where do these wounds come from? There are some that come from shark bites. Below is a picture of Podrick, a speckled juvenile female, who got bit by a shark this summer.  We first saw her in June this season and it already started to heal over. You can see the puncture marks from the shark’s teeth from both the upper and lower jaw. Sharks do prey on dolphins; we often see shark bites on mothers who may have been defending their calves. There are a few different types of sharks in the Bahamas who may be the culprits: tiger, lemon, hammerhead, and bull sharks. 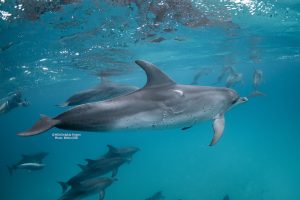 Other wounds can come from human disturbances such as boat propeller strikes and discarded fishing line. Dolphins can become entangled in the fishing line and it can dig into their skin. Below is a picture of an adult fused female we call Deni. You can see on her peduncle (the area behind the dorsal fin to the tail fin) there are some notches out of the body on the top and bottom.  This wound could either be from a boat propeller strike or fishing line that got wrapped around the peduncle. We have seen quite a few of these types of wounds on the peduncle area of Atlantic spotted dolphins in Bimini. 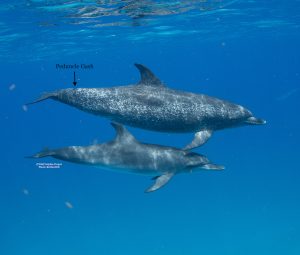 Gashes on the top and bottom side of the peduncle on the fused female Deni.

Sometimes dolphins can inflict wounds on other dolphins during aggression. We often see rake marks
(from dolphin’s teeth) left behind on the skin of another dolphin. Superficial rake marks do not last
forever, but sometimes they can stick around for a full field season.

Rake marks are the white lines on the peduncle of this individual.

Sometimes dolphins can inflict wounds on other dolphins during aggression. We often see rake marks (from dolphin’s teeth) left behind on the skin of another dolphin. Superficial rake marks do not last forever, but sometimes they can stick around for a full field season.

Dolphins can also leave gashes on one another from tail swipes. Dolphins are very strong and when they tail slap each other, a behavior often seen in aggression, it’s possible they could leave a long gash in the process.

The thin line being pointed out by the arrow, is a possible wound from a tail swipe.

Lastly, there is another possible culprit for some of the injuries we have seen this summer. Killer whales, also known as Orcas, are the world’s largest dolphin and they have been observed in The Bahamas. Depending on where Orcas live, some of them prey on marine mammals including cetaceans. According to Dunn and Claridge (2013), the Orcas who live around The Bahamas have been sighted preying on Atlantic spotted dolphins. Also in the paper by Dunn and Claridge (2013), there is a map with all the Orca sightings from 1913-2011, and one of the sighting dots looks like it is right over Bimini. The wound we believe could be from an Orca attack was on a bottlenose dolphin and not an Atlantic spotted dolphin. But the spacing between the teeth marks are too large to be from another bottlenose dolphin. If this wound is not from an Orca, it could possibly be a False Killer Whale attack. 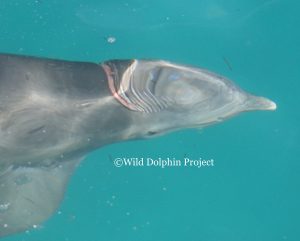 The top right view of the possible Orca bite on the bottlenose dolphin. 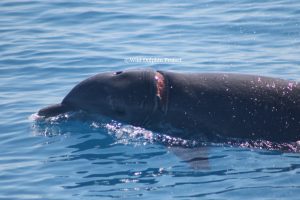 The left side view of the same wound.

Aside from the wound on the bottlenose dolphin, we also observed odd behavior from the Atlantic spotted dolphins during that same trip and the following trip. They seemed to be harder to find, abnormally quiet, and barely putting their dorsal fins out of the water when they would come up to breathe. Dr. Herzing, Founder and Director of the WDP, says these behaviors are indicative of a predator in the area.

Your ticket for the: Sharks? Boats? possibly Orcas?