Wild Dolphin Project > Media > Blog > Bahamas Trips > No, That Dolphin is Not Smiling At You 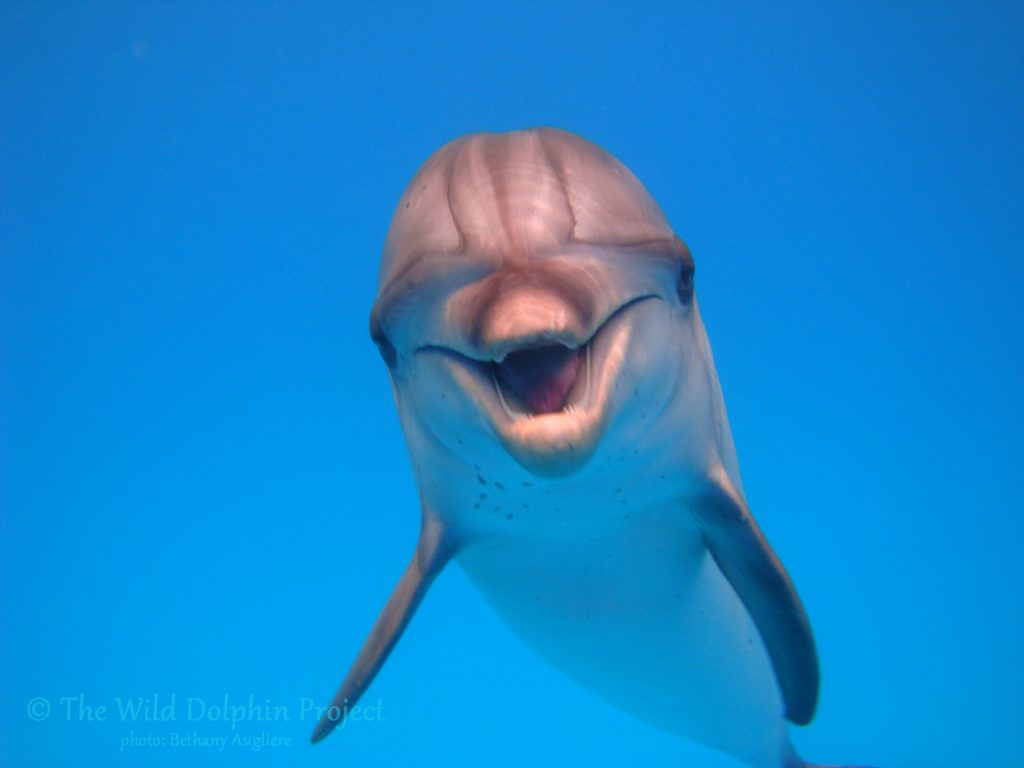 This is a young male spotted dolphin, giving an open-mouth display, which basically means, back off!

It’s a familiar sight —  whether at aquariums, in the movies, or Instagram photos — a friendly-looking dolphin with an open mouth, which gives the appearance of a smile. But, in the wild, that open mouth is anything but friendly.

In the Bahamas, people have the incredible opportunity to swim with wild dolphins who are often, curious and playful towards them. Despite that, “dolphins don’t always want people in the water with them.  They have their own lives.  The friendly myth has been perpetuated by captive programs that allow people to hug, rid, and train dolphins,” says Denise Herzing, Ph.D., director and founder of WDP.

So, how would you know if you’ve pissed off a dolphin? Read on.

A bottlenose dolphin display an S-posture, an aggressive posture.

At the Wild Dolphin Project, our researchers have had the privilege to closely observe the underwater behavior of a community of wild dolphins living in the Bahamas since 1985. Every summer, we spend months at sea recording these animals as they go about their daily lives.  Because of our long-term data collection, we’ve watched generations of dolphins and know them all as individuals and can track those individuals while we observe them. This knowledge is powerful when it comes to analyzing their behavior to further understand them.

For instance, what does it mean when a group of male dolphins sync up their vocalizations and start jaw popping, or when a female goes inverted under her calf, or when we see a group of dolphins come at us with an open mouth display?

As intelligent, long-lived mammals with complex social lives, animals need signals to convey information, in addition to their vocalizations. Think of your dog when it squares off with another dog it doesn’t know, and holds its head high or raises its hackles to appear bigger and display dominance. During aggressive encounters, one signal or posture dolphins use is an open mouth.

In captivity, dolphins blow bubble rings for fun or entertainment. In the wild, it’s also used during escalated aggression.

When we observe the very curious and playful Atlantic spotted dolphins of the Bahamas, we recognize that we are in their world. We try to interfere with their natural behavior as little as possible. If they are mating, fighting, feeding, we hang back and passively observe them at the surface. Sometimes they are curious and want to play with us, so we engage them. But other times, even if we are being respectful and giving them distance, they show us that they don’t want us around.

“Dolphins are social animals.  They are not friendly all the time.  They have their own needs and annoyances and show a continuum of behavior from play to aggression.  Dolphins, like other animals, will show their aggression when you are disturbing them. You just have to be savvy enough to recognize their signals,” says Herzing.

Yes, there are times the dolphins don’t want us around and we respect that. “We feel that it is equally important to have both a respectful relationship with the dolphins as well as collect data.  We are in their world, so if they don’t want us in the water (which we recognize from their signals) we get out of the water.  Period,”  Herzing says.

“I remember one time we slipped in the water to film a mom/calf group. They appeared to be traveling so we thought we would get some photos to identify the group,” says WDP researcher Bethany Augliere. “However, it was clear they wanted nothing to do with us — one of the moms gave an S-posture, which is a signal used in aggression. She was telling us to back off and we did.” It was 4th of July weekend and lots of boats were around. Perhaps a lot of people were jumping in with them and they had had enough human interaction.

More recently, a little group of juvenile males that were doing some practice courtship with a female decided they didn’t want us around after observing them for a solid hour or so. So, the group of young males grouped up, turned towards us, and gave an open mouth display, says Augliere. 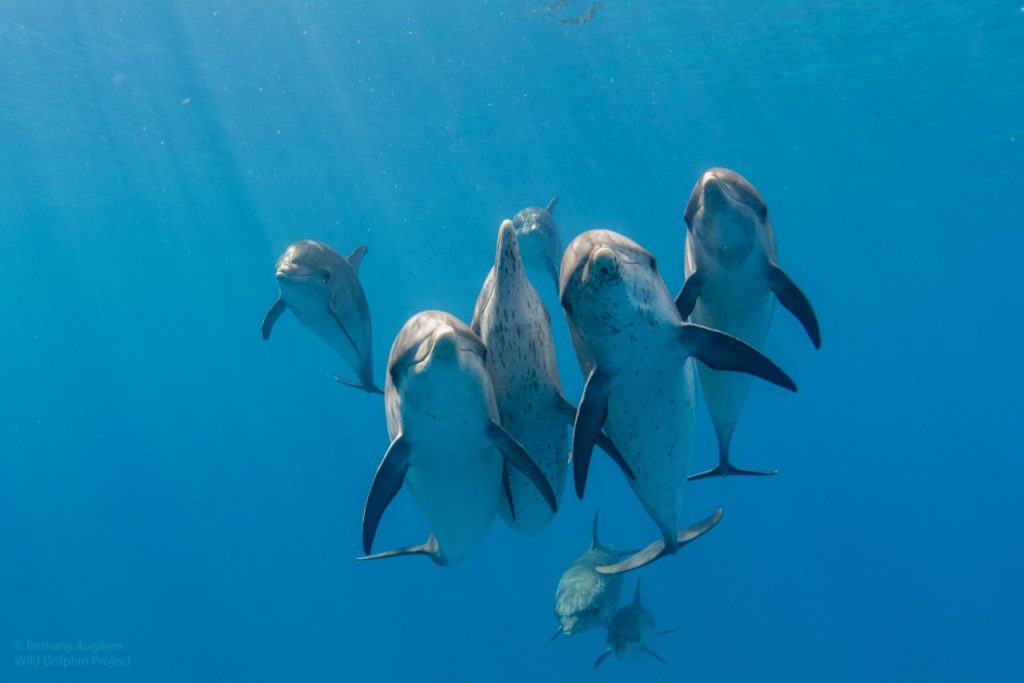 A young group of males who eventually gave the researchers an open-mouth, telling them to back off.

For Cassie Volker, WDP research assistant, though there have been a few instances over the years that dolphins have signaled their irritation at her presence, one encounter sticks out in her mind because of its subtlety.  “I knew the behavior only because I had studied dolphin aggression for my thesis,” she says. The behavior is called “perpendicular pass” and basically it is when a dolphin(s) will intentionally swim right in front of another group of dolphins during a fight.

“There was a large group of older male spotted dolphins and they were all fighting. When aggression is going on, we try to hang back and give them space while still being able to video the aggression to analyze the behaviors. Because the dolphins are constantly swimming, sometimes they swim towards us and there is no time to get out of the way. When this happens, we try to tuck ourselves in and get out of the way as much as we can and let them pass. This is what was happening during this encounter, and we must have gotten in the way one too many times because Latte, an adult male, started to perpendicular pass in front of us multiple times. You can see him on the video cut us off. I think he was trying to cut us off and show us that he wasn’t happy with how close we were. After the 2nd or 3rd perpendicular pass, you can hear me tell everyone to back off and after that we got out of the water,” Volker says.

“To someone who doesn’t understand dolphin behavior it might’ve seemed as though Latte wasn’t interested in being with the larger group and wanted to be close to the people. However, knowing that aggression was going on and that this perpendicular pass behavior is utilized in aggression, I realized the signal being shown to us,” she says.

Know Before You Go

If you happen to be so lucky to swim with a wild dolphin, remember you are in their world. And if you respect and love wildlife, watch closely and pay attention. “Every animal has their own aggressive signals,” says Herzing. “It’s important for humans in contact with animals to know, recognize and respect these signals.”

And this respect doesn’t just apply to aggression. There are times when we are with traveling groups to get photo-identification shots, and the calves want to play with us and the mothers have to keep coming back to scoop them up. We don’t want to disrespect the mothers and prevent them from going where they need to go and potentially getting separated from the group. In those cases, we also get out of the water. If dolphins are digging in the sand looking for fish, we don’t dive down on top of them and distract them because then they are wasting energy.

If you know in advance you are going to be swimming with these animals on some type of photo safari or eco-tour, do your research. Please go with respectable operators,  research on your own about their behavior, and remember these dolphins are just trying to live their lives, with the added stress that comes from boats, noise, pollution, changing environmental conditions, harassment etc…

If you’re looking for more information about dolphin behavior, our website is a great place to learn more! You can check out our old blogs, scientific publications, or even our social media.

Here are a few other organizations or researchers that do a lot of outreach and science communication:

Your ticket for the: No, That Dolphin is Not Smiling At You