End of Season Blog – A challenging end to our field season.

After a spectacular season of trips and data collection during May, June and July, our August trips were challenged by weather and other issues. We escaped the brunt of Hurricane Dorian but with the approaching storm we ended our field season early and secured our research vessel in Florida.

Our trip in mid-August was at least a productive trip equipped with new and better technology. On August 14 we set out loaded with drones, computers, underwater devices, and the technical expertise to go with it. Our three main goals for this trip were to: 1) Retrieve our passive listening devices (E.A.R.s), 2) test the second prototype of Dr. Matthias Hoffmann-Kuhnt’s underwater dolphin localization device, ASPOD 2, and 3) train our new computers for our two-way system, CHAT.

The first two days of the trip were designated to pick up our E.A.R.s that had been deployed in mid-June. But our plan was slightly disrupted by the appearance of a Whale shark! A rare sight in our experience, we have only encountered one other during our 35 years of research and that was back in 2013. For this sighting, we were able to observe this whale shark underwater for about 10 minutes (Facebook video). After all the excitement over seeing a whale shark, we eventually found our underwater listening devices. First Mate, Tyler Hazelwood, and Board Member Drew Mayer, managed to retrieve them from the ocean floor for data extraction. Analysis of these sound samples will allow us to look for larger patterns of dolphin habitat use while we are absent from the area. This will help us better prepare for next field season.

The next few days were spent getting Matthias in the water to test the second prototype of ASPOD, our underwater acoustic localization device (previous blog post). Critical to understanding dolphin communication is their conversations. Historically our equipment, and most research projects, only allow the regular collection of sound and behavior with a group of animals. Building and deploying an underwater device that can accurately localize the vocalizer is one of the last, but most important, steps to understand dolphin communication. Who is conversing with who? Luckily we had some great behavioral observations and Matthias was able to record whistles and clicks as needed. 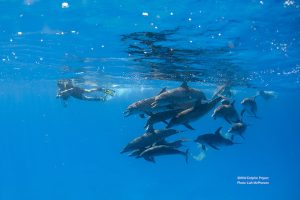 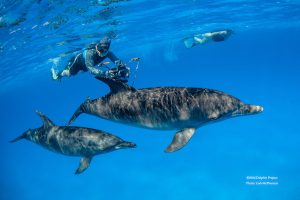 In between dolphin encounters our Georgia Institute of Technology team was out to test and train our new version of CHAT (previous blog post). Dr. Thad Starner, and graduate student Chad Ramey, spent their time writing code, testing hardware, and training the computers using synthetic whistles, to respond to the dolphin’s mimic attempts with our communication system. A very successful test, we should be ready to deploy CHAT again next field season and finally respond to what the dolphins are trying to do with this system. Read more about CHAT and support this technology.

Our last trip, Trip 9, was severely disrupted by the growing and menacing Hurricane Dorian. As we scrambled back to Florida to secure boat and passengers, Dorian grew large and dangerous, with a bull’s eye on the northern Bahamas and South Florida.

Hurricane Dorian, a category 5 storm with sustained winds over 185mp, stalled over the northern Bahamas for 2 days.

As you all know, Florida was spared. But the northern islands on Little Bahama Bank (Abacos and Grand Bahama Island), site of our historic study area, were devastated. As I write this, we are assessing our abilities to do a reconnaissance trip to look for dolphins and to bring much needed supplies to the people. Many relief organizations are currently on the ground there, and recovery will be slow. But we hope to help in the near future, and also see how the dolphins did in the region.