Researchers all over the world have turned to Passive Acoustic Monitoring (P.A.M.) as a technique to record underwater audio signals from marine mammals.  PAM systems are typically deployed and sit on the bottom or hang in the water column attached to the bottom at various depths.  Basically, the system is “triggered” to turn on and record when a certain frequency of sound is heard.  With today’s technology, it is possible to record continuously and store data, or sample periodically for even longer periods of time. The researcher then retrieves the stored data in the unit, and can look at how often certain species of cetaceans go by, and what signals they produced.

In the Bahamas, we normally focus on correlating sound with underwater behavior with our underwater video systems.  Our study site is one of the best in the world for observing the lives of these animals underwater.  However recent events, specifically the mass displacement of our resident community of dolphins in 2013 (download article), have led us to employ this technology to see if we can remotely assess some of their changing movements and habits.  Partnering with colleague Dr. Marc Lammers and his team at Oceanwide Science  in Hawaii, we deployed our first Ecological Acoustic Recorders (E.A.R.) in the Bahamas this May.  E.A.R.s are recording devices developed by Marc a decade ago and are used all over the world.  Although there are now other companies that manufacture similar devices, we chose to work with OSI since they had a long-standing expertise in this field. 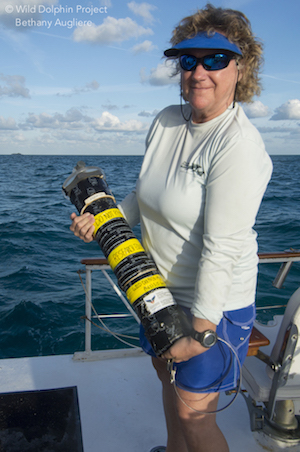 Because half of our resident dolphins on Little Bahama Bank (LBB) left in 2013, we chose to deploy two E.A.R.s in this location.  Although we still monitor this study site, we now split our time between LBB and Great Bahama Bank (GBB) further to the south where our previously resident group now lives, in addition to other local dolphins. See our scientific publications page for this and more scientific articles.

Our first 2018 trip left for the Bahamas May 8 and by May 9th we were out in the field deploying our E.A.R.s.  Our first site is relatively remote and is sometimes in accessible due to large seas, but we pushed through the large waves and got there the first day to deploy the first device. 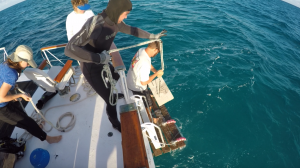 First Mate, Tyler Hazelwood, lowers the 60lb concrete block safely down to Captain, Brad Ruda, who will then lower it from the platform to the divers below.

Thanks to the handy work and skill of our friend Thomas Infante, we began by lowering a 60 lb block of cement designed to hold the EAR in place with hose clamps. 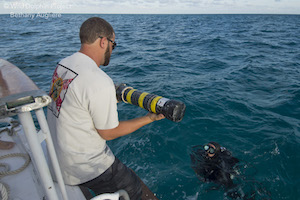 Captain, Brad Ruda, hands of the E.A.R. to be secured to the concrete block already on the ocean floor

After the Block was on the bottom, divers carried the EAR down to the bottom and strapped it in with hose clamps. 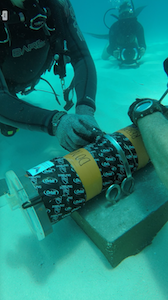 The E.A.R. is fastened securely

As the rest of us watched on deck, 4 spotted dolphins suddenly appeared.  We immediately sent Bethany Augliere, our team member photographing the process, off to identify the dolphins.  With no way of notifying the divers that dolphins were around, we set up to get in the water.  First mate, Tyler Hazelwood, and Board Member ,Drew Mayer, said they thought they heard dolphins and sure enough, soon dolphins were swirling around the divers and the E.A.R.S..  Filmmaker Larry Curtis was also in the water covering the deployment and captured the dolphins swimming over the EARs as well.

What’s even more amazing is that the dolphins appeared in an area where they use to frequent, but have not been sighted there in the last two years.  In addition, Amanda, one of the four dolphins had actually left LBB for GBB, and returned in 2016 with three previous resident males spotted dolphins.  So, needless to say we were thrilled to see them and happy to know that our choice of deployment site will be a productive one.  Read Bethany’s blog from this trip for encounter details.

Later in the day, after leaving the remote area, we deployed the second E.A.R., also on sandy bottom, but closer to the island of Grand Bahama.  Although no dolphins appeared during the second deployment, the E.A.R. was successfully set on the bottom without issues.

Now, we let the E.A.R.s do their job, recording sounds for the next month.  In early June, we will bring the E.A.R.s back up, switch out the hard drives, and redeploy them again for another month of data collection.

STAY TUNE FOR OUR JUNE UPDATE OF PROJECT E.A.R.

Your ticket for the: Can you hear me now?