As 2019 comes to an end, we decided to reflect back on our year at the Wild Dolphin Project. It was a season filled with good weather, amazing dolphin behavior and unique sightings of marine life, including whale sharks and sperm whales!

For the 2019 field season, we had 69 total encounters. Six of those were on our original study site on Little Bahama Bank off Grand Bahama Island and 63 were on Grand Bahama Bank off Bimini. We had 19 pregnant females (wow!) and 10 new spotted calves: 5 females, 4 males, and one we haven’t determined yet.

In total, we saw about 85 perfect of our GBB population and 35 percent of our LBB population. That’s where you come in! If you haven’t heard yet about Flukebook, be sure to check it out and spread the word. It’s a way that you can help us track our dolphins by uploading your photos from the Bahamas. Everyone here at WDP is excited about Flukebook and the chance to collect even more data to help our research!

For Cassie Volker, WDP’s research assistant, her favorite moment of the field season came at the very beginning. “Our field season had just begun and we were all excited to see what the summer had in store. Last October, we participated in the release of a stranded spotted dolphin, named Lamda, we had been studying in Bimini since 2013. We were all wondering when we would see Lamda after the successful release,” says Cassie. “Well he did not make us wait very long because he was there on our first encounter of the season! I had the privilege of being in the water with Lamda video taping his release back into the wild. I am not sure if he remembered me or the big yellow camera we use, but during the first encounter of the summer season he came right up to me, and circled tightly around me. We do not like to anthropomorphize the animals but this really felt as though he was saying “Look at me, I am back where I belong. Thanks for the help!” It is a memory that I will forever have and I wouldn’t change it for the world!” 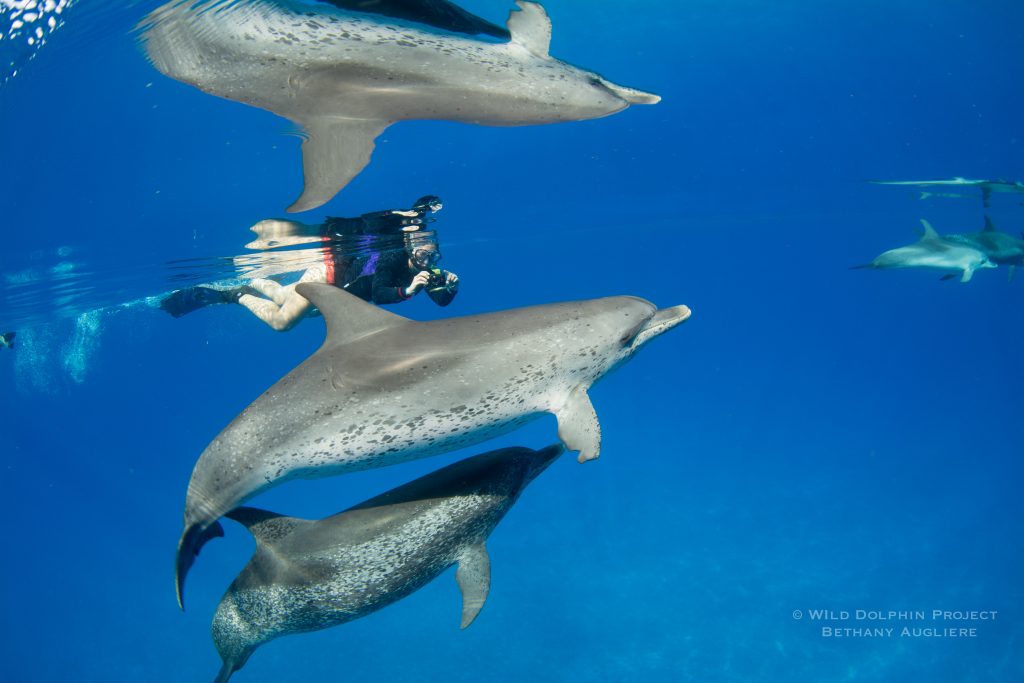 Brittini Hill joined the project in 2018 as an intern and then came back in 2019 as a new graduate student working with Dr. Herzing. “One of my favorite experiences from this past season was meeting people from all around the world who share a love for the ocean and its inhabitants,” she says. “In just days we become a little boat family, sharing birthdays and other holidays at sea. Meeting such charismatic ocean lovers gives me hope that people will take action to protect our blue planet, including the dolphins we all love and care for so much!” 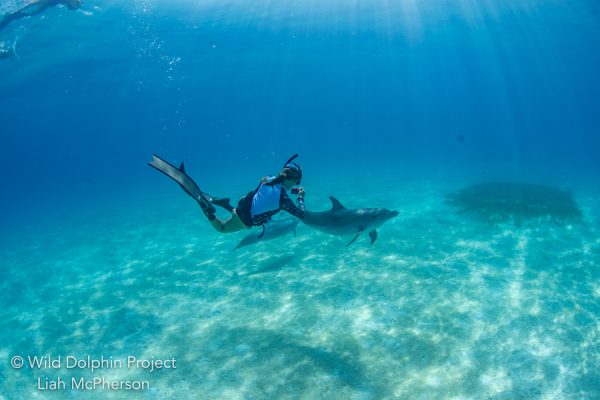 For field assistant Liah McPherson, she was most thrilled “that we documented 10 new calves – from both the migrant Little Bahama Bank group and the resident Bimini group.” “On top of that,” she adds, “we observed a ton of pregnant females. I’m excited to check in next season and see which females have new calves. A couple of them might be first-time moms!” Liah is also grateful for the great weather we had this past season, especially considering the last few seasons have been rough — which makes field work, finding and studying the dolphins much harder. “I’ll never take those glass calm days for granted — nothing is better.” 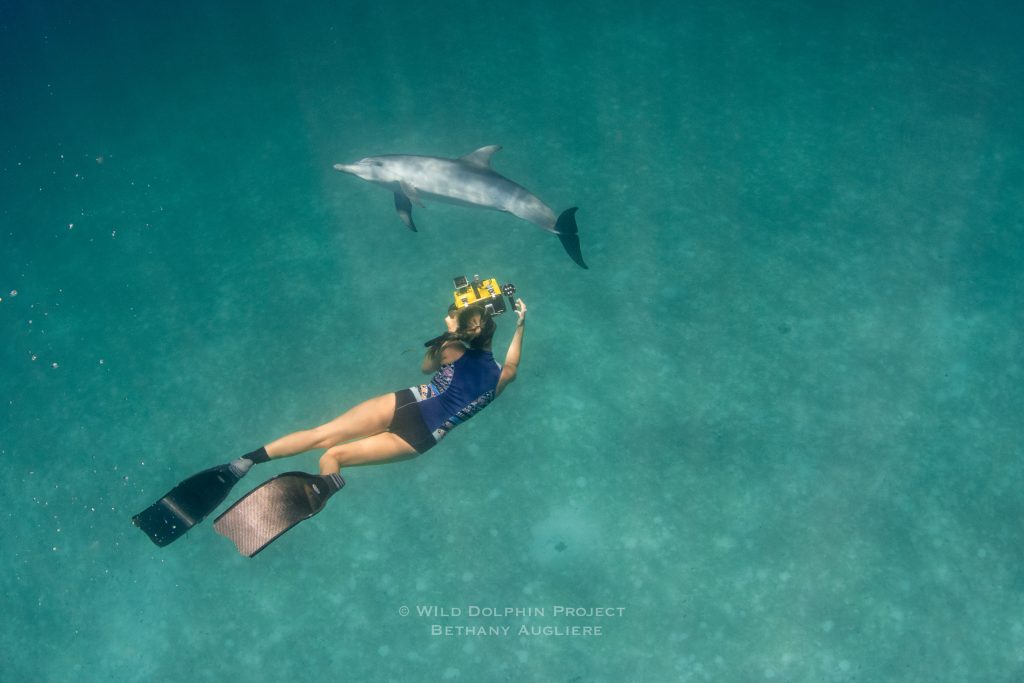 For Theresa Carlsen, our amazing cook who always has a smile, (read an interview with her here), it was hard for her to choose just one favorite moment. “It was an incredible season,” she says. However, one experience that stood out was during a night drift, which is when we head into deep water to watch the dolphins feed on squid and flying fish. Night drifts don’t happen too often because we need perfect weather conditions. “We had about 5 dolphins that stayed near the boat feasting on the fish drawn in by the boat lights,’ she says.

The night drift was also a favorite moment of our First Mate, Tyler Hazlewood, a captain and scuba instructor. “One of the most amazing moments in my time with the project observing the spotted dolphins engaging in a multi-hour night fishing frenzy,” he says. “My experiences with the WDP have seemed fit only for works of fiction, but somehow swimming alongside a whale shark, observing captivating animals and sleeping beneath a star-filled sky has become a reality. It is truly an honor to be a part of Dr. Herzing’s long term study of the Atlantic Spotted Dolphin in the Bahamas,” he adds. (To read more about Tyler’s experiences throughout the season, check out his personal blog).

Our Captain Brad Ruda was also excited about some of the more unusual sightings this season, like the whale shark and sperm whales and the good weather. “I was stoked about this years extra encounters,” he says. “Seeing dolphins like we do is already amazing, but being able to see the offshore bottlenose on the bank, sperm whales in deep water, a whale shark at Memory Rock, tiger sharks cruising the bank, and a manta ray clearing 20 feet out of the water made this season extra special, not to mention we finally had a year with good weather!” 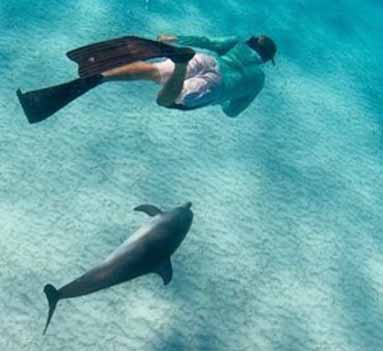 To our Executive Assistant, Melissa Williams, the recent hurricane left a lasting impression.

“Even the most hurricane hardened Floridians took Hurricane Dorian seriously. We prepared for the worst. After many days of diligently tuning in for the most recent NOAA update, we breathed a collective sigh of relief as it abruptly steered away from our shores. For me, the most significant moments from 2019 happened in the conversations that took place as we rallied to bring rebuilding supplies to help our neighbors in the Bahamas. All I heard was “how can I help?”. Strangers became friends when recalling their personal experiences and sharing how beautiful it is in the Bahamas,  then they would remark about how we lucked out that this Cat- 5 storm passed us by. And then, every time, without fail they would ask how could they help. That’s it. People just want to help. It softened my heart to see there is still some depth to us humans after all.”

As the decade ends, our founder and director, Dr. Denise Herzing can’t help but think of the future for the dolphins. “As summers go by I am constantly reminded of the delicate nature of the health of our environment and oceans. After studying dolphins for over three decades, it is clear that large climate changes are underway, both affecting the food change and thus the movement of our dolphin community. These changes are happening around the globe and we will be witnessing more of these as the years go by.  We are committed to continue to tell the story of the dolphin’s ongoing challenges living in a changing environment.”

Your ticket for the: Looking Back on 2019