Editor’s Note: This blog originally followed Thanksgiving, but we had a website crash and lost the entire blog, which had to be rewritten! So, if you missed it the first time…here it is again.

The Bahamas is a chain of about 700 islands dotted throughout 100,000 square miles of ocean. We work off two islands, Grand Bahama Island and Bimini. Both of these islands have large shallow sandbanks surrounding them, averaging 15 to 40 feet in depth. The seafloor can be stark white sand, resulting in that postcard aqua colored water or a seagrass meadow, giving the ocean’s surface a slightly greener tint. The edge of the banks, which are lined with reefs, rocks and wrecks, quickly slope off into water thousands of feet deep. 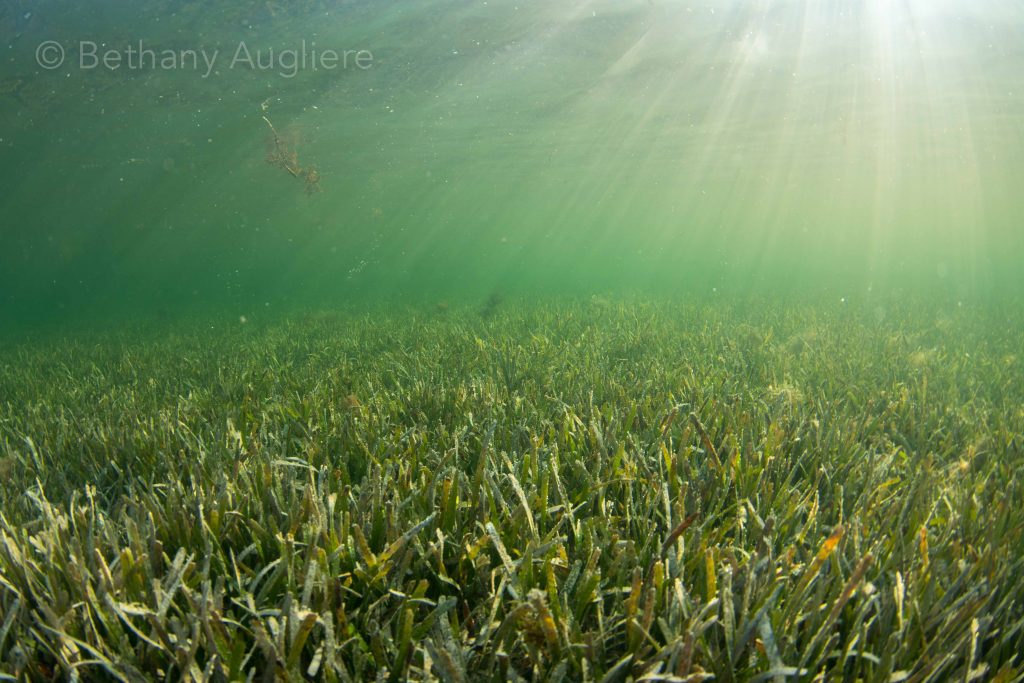 Both Atlantic spotted dolphins and bottlenose dolphins call these banks home. Dr. Denise Herzing, the project’s founder and director, has been studying dolphins in the Bahamas for more than 30 years. In that time, they’ve become habituated to her presence, as well as other humans. What does that mean? Though the dolphins can be quite curious and playful with humans, they also continue their normal everyday behaviors required for living while in the presence of humans, such as mating, nursing, teaching, sleeping, fighting and of course, eating!

A spotted dolphin calf nurses from his mother.

Over the years, Dr. Herzing and the project have learned a lot about their feeding behavior. We’ve seen the dolphins dig for fish in the sand, zip around the surface to snag ballyhoo, and buzz squid in the middle of the night. But the two dolphins have some major differences in their feeding patterns. 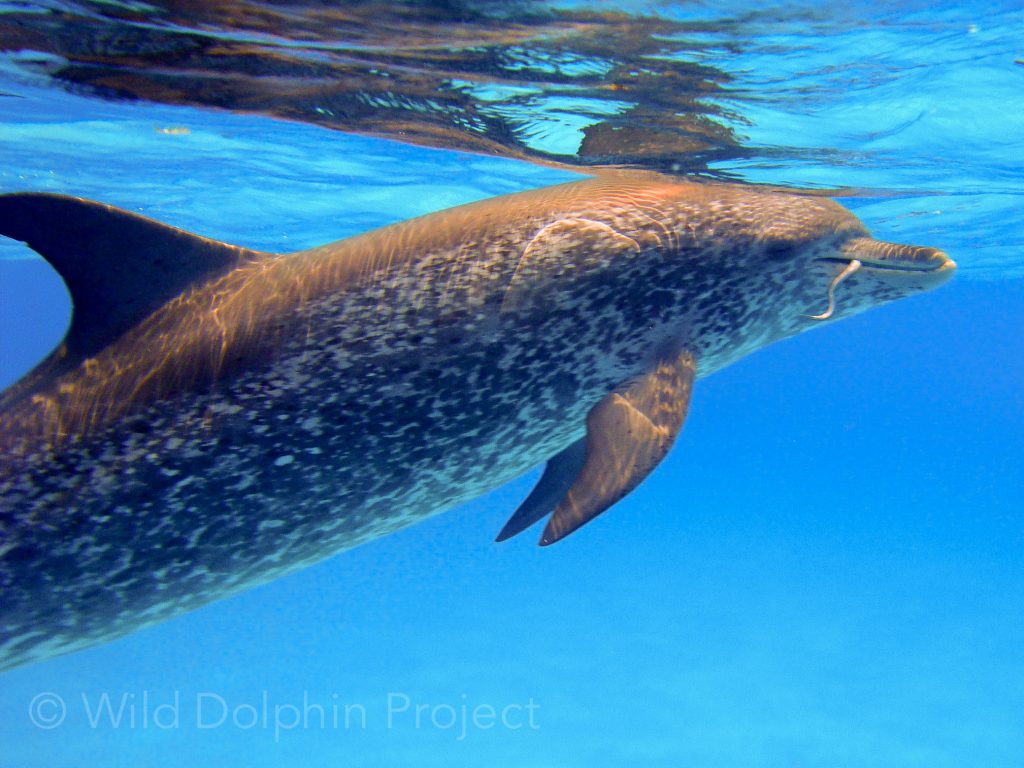 Deni surfaces after catching a snakefish. (photo from 2013). 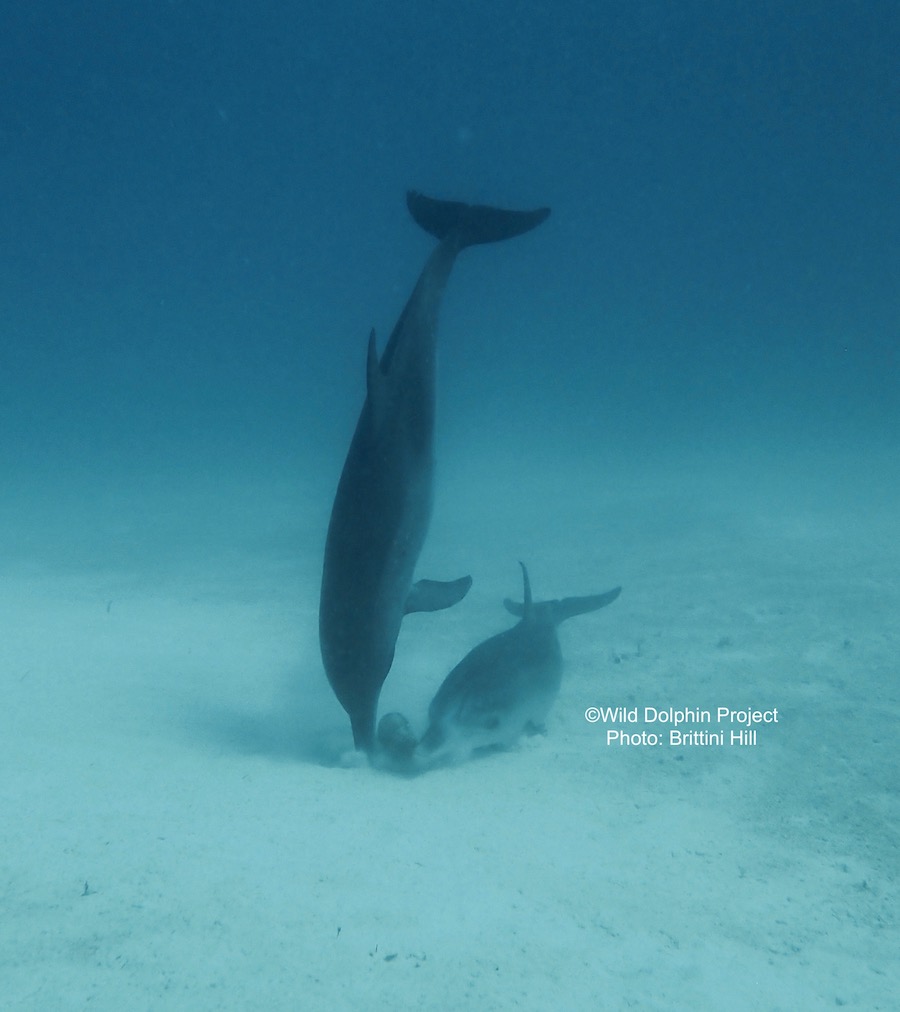 Spotted dolphins checking out something in the sand. Is it edible?

The two species not only eat different fish in different proportions, but also have differences in where they eat. The bottlenose dolphins feed in deeper waters in both sand and seagrass beds equally. Spotted dolphins, on the other hand, almost exclusively feed in the sand — during the day.

To find their prey, the torpedo-shaped marine mammals swim and scan the surface, water column and seafloor with their echolocation. They’ll also actively look in holes and under ledges. Once they locate a fish in the sand, they dig with their rostrums to snag the fish. For more deeply buried fish, they will beat their tails against the sand to disturb it — and the fish — which creates a vortex that traps the fish.

Bottlenose dolphins also sometimes dig so deep in the sand, they dig up to their pectoral fins. A group of bottlenose dolphins will work an area, digging in the sand and leaving behind craters. Denise termed this behavior crater-feeding. To her, the resulting cratered seafloor resembles the moonscape. It’s not uncommon to see nurse sharks hovering around during dinner, hoping to catch an easy fish that the bottlenose have stirred up.

A bottlenose dolphin crater-feeding on the sandbank.

The bottlenose dolphins are generally less tolerant of humans, with just a few individuals that interact with people regularly. However, when they are feeding, they don’t seem to mind our presence as long as we stay at the surface to passively watch them. So, we avoid diving down next to them while they are crater-feeding. Our goal is to never interrupt activity: in their world, on their terms — that’s our motto.

Denise suspects one of the reasons the bottlenose dolphins are less social than the friendlier, smaller spotteds is related to size. To sustain their large bodies, they need to take in a lot more calories than spotteds, which means more time dedicated to foraging (searching for food). In other words, the spotteds have more free-time to goof-off.

The spotteds also have somewhere to eat where the bottlenose don’t venture — deep water….at night.

As the sun approaches the horizon, the spotted dolphins will start heading off the shallow bank and into water thousands of feed deep. They are there to feed on the squid and flying fish.

To study this behavior, we take our research vessel into deep water at sunset, rather than anchoring on the bank. We drift with the current, eat dinner, and drop in underwater microphones, called hydrophones, to keep an ear out for any nearby dolphins. Once the sun disappears, we drop lights into the water to attract prey, like squid and fish. Then we wait for the dolphins.

If the conditions look favorable, we slip into the water to record the individuals present and sounds. At night, it’s very different than during the day. The dolphins fade in and out of the light, and they aren’t interested in socializing or interacting with us. They are there to feed. It’s noisy as they scan the water with their sonar, honing in on their targets. They’ll snag a fish right before our eyes, and we see them chase squid down into the depths. Whether chasing squid or flying fish, both were correlated with echolocation click trains often with a terminal buzz representing the targeting and closing in on prey.

We end the drifts when the dolphins leave (or if they never show up), if it’s getting late and we need to head back to our anchorage, or if critters like sharks or box jellies show up.

Night drifts may seem intimidating, but there’s nothing quite like swimming in the middle of the ocean with the darkness around you, dolphins zipping in and out of the lights while echolocating, and a clear, starry sky above. We stay close to the boat, in the lights and with the group. If it’s choppy or bad weather, we don’t drift — the conditions have to be just right.

When we end our drifts, we head back to shallow water and often the dolphins join us on the bow. As they ride our bow, their bodies disturb the bioluminescent plant-based plankton, which makes the dolphins appear to glow green. It reminds me of this quote by Loren Eisely, “If there is magic on this planet, it is contained in water.”” 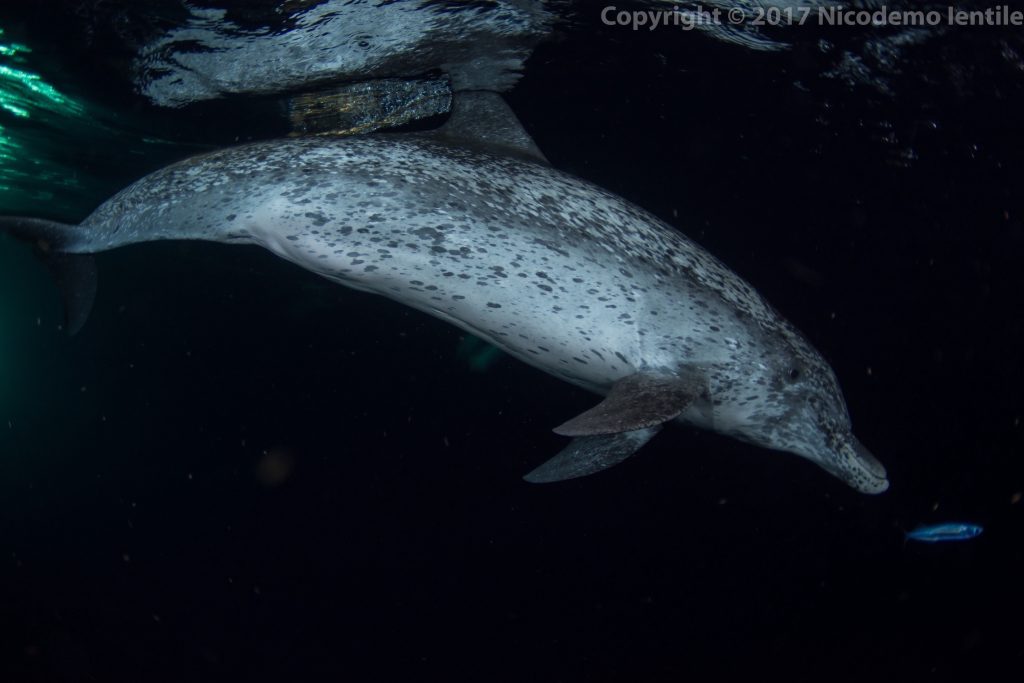 Photo by Nicodemo Ientile. A spotted dolphin chases a flying fish at night.

Your ticket for the: Feeding Frenzy