By: Liah McPherson and Brittini Hill 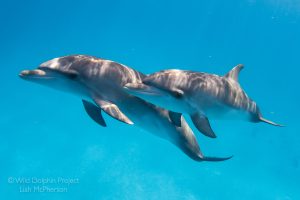 Smolder (left) and his yet-to-be-named friend zoom by the camera.

Trip three started strong! On our first full day, we had three encounters up on the Little Bahama Bank. Our Northern field site covers a large search area and has relatively few spotted dolphins compared to Bimini, so finding three groups in one day was fantastic. We found Brush and Tristan from the original Northern Group, and then some Southern Group juveniles socializing in deep water. Both groups were quite curious and playful. At the end of the day, we found Naia and her calf Nala briefly as we were heading in to anchor. It’s always good to see calves hit the 2-year mark –– their mortality decreases notably beyond the first year. And on the topic of calves, we were able to name Smokey’s calf this trip: Smolder! He’s often seen with another soon-to-be-named calf, and the two of them seem sometimes inseparable. 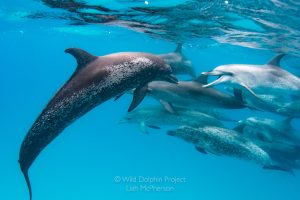 Lettice opens his mouth wide, expressing aggression, while head to head with an older male, Sunami.

After a couple more days up north, we headed to Bimini and the rest of our days were glassy, calm, and dolphin heavy. We observed a large range of behavior, including play, rest, travel and aggression. The aggression encounters in particular were fascinating. On two occasions, we encountered a large group of nearly 30 dolphins –– both native Bimini dolphins and Little Bahama Bank migrants –– engaged in intense aggression. They were mostly older males (it’s usually the boys who fight), with a few young females and males “play fighting” on the periphery. We often see the younger dolphins practicing these behaviors nearby, and think it helps them form alliances as they mature. 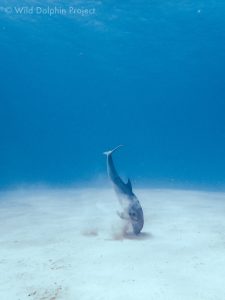 A male bottlenose dolphin forages in the sand for razorfish.

We were lucky enough to have two in-water encounters with bottlenose. These encounters are really important for figuring out the sex of individuals and getting more detailed identification photos of them. Bottlenose dolphins are much less distinct than their spotted relatives! The second time we saw them underwater, they were crater feeding in perfect Bahamian blue water, which allowed us to capture some great footage of them. 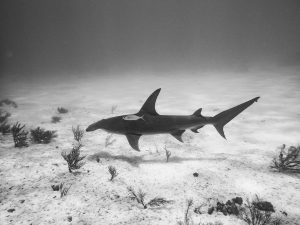 A great hammerhead shark cruises by at Hens and Chicks.

As if all these amazing dolphin encounters weren’t enough, some of our crew and interns got to see a great hammerhead shark while snorkeling at Hens and Chicks on one of the last days! This species is common to the Bimini area, but more often seen during the winter, and they’re usually quite shy. Apparently, this one swam right by our swimmers! 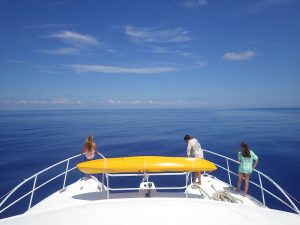 Our crew and interns enjoying calm seas in the middle of the Gulf Stream.

By the end of the trip, we didn’t think the water could get any calmer. Every day of the trip had swell of less than 2 ft, and usually less than 1 ft –– but the crossing back to Florida was one of the flattest days we’re ever seen. We sure had a lucky group of interns! It seems like they were well rewarded for all their hard work and eagerness on this trip.