After a cancelled first trip due to weather, Trip 2 made it out successfully! We had 6 interns on board as well as our regular crew including two graduate students, a cook, captain, first mate, and myself. To get to the Bahamas the R/V Stenella must cross the Gulf Stream, a powerful Atlantic Ocean current originating at the tip of Florida and following the eastern coastlines of the United States up to Newfoundland. Large swells build in the Gulf Stream, which can make for a rough crossing. Luckily for us it was a beautiful calm day. 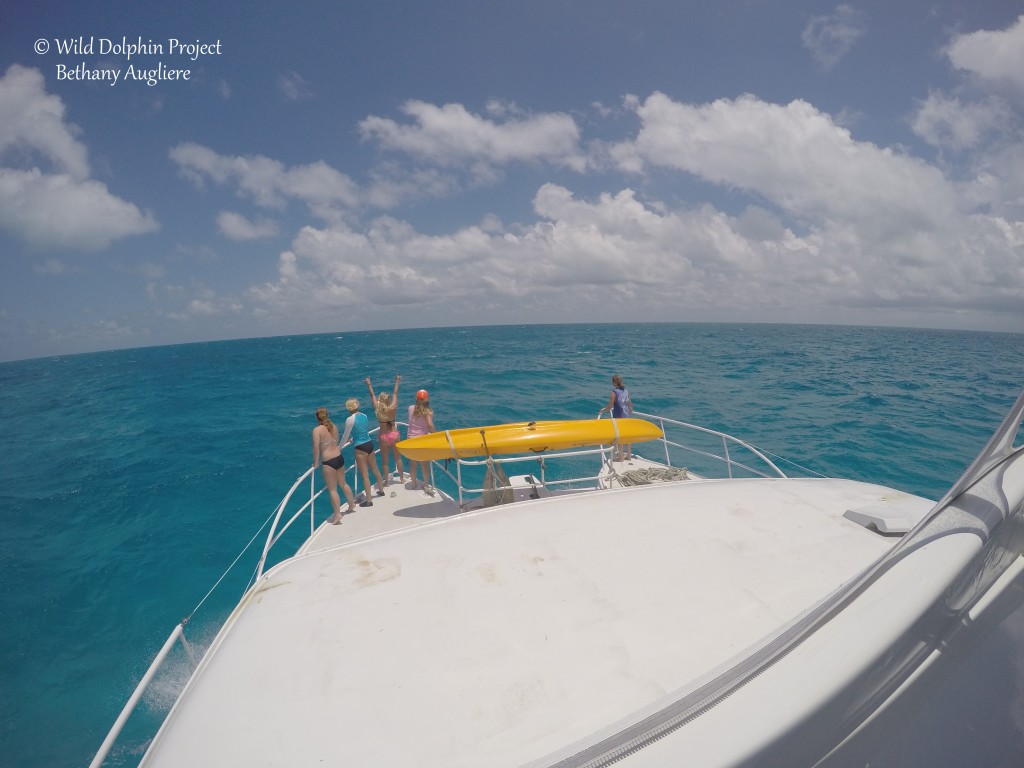 Our interns for Trip 2 enjoying some sunshine and waves on the bow of R/V Stenella!

The first few days of our trip we had the most amazing glassy water. It was so clear we could see nurse sharks and sea stars sitting on the bottom. These types of conditions make spotting dolphins much easier. The crew and interns took turns on Dolphin Watch, an hour long shift where one person is designated to scan for dolphins as well as log environmental data (location, wind direction, temperature)  in our daily log book. Interns also recorded the sea state of the water based on the Beaufort Wind Scale. For example, a B- 0 rating indicates glassy smooth water and light wind while a B-4 indicates small waves with whitecaps and wind up to 15 knots. With increasing surface chop due to wind, spotting dolphins becomes more difficult. 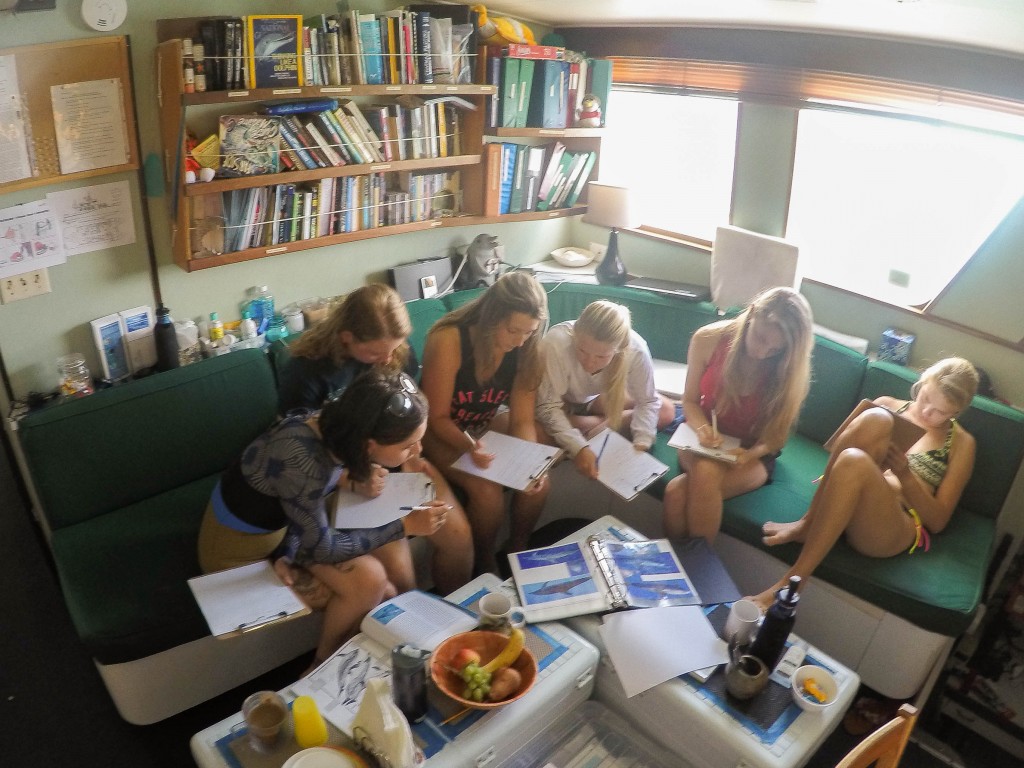 During spare time on the boat interns worked on photo-identification exercises and wrote in their journals.

We searched and searched, looking for a group known as the Southern Cluster. This is a group of about 35-40 animals, many Dr. Herzing has known since the 1980s. The southern cluster includes well-known individuals such as Venus (a grandmother), Violet, FlyingA, Gelato and Flambe. Gelato and Flambe were pregnant last year so we were curious to see if their calves survived the winter. The older males of this group include two alliances: Google and Island and Helix and Crick.

Venus, one of the most frequently encountered females of the Southern Cluster.

The first dolphins we actually came across were bottlenose dolphins.  When bottlenose are spotted we take surface shots of their dorsal fins for photo-identification.   Sommer is one of Dr. Herzing’s newest graduate students who will focus her thesis work on the bottlenose dolphin population dynamics, including residency patterns and immigration. After getting surface shots, we geared up to get in the water and record underwater behavior. They didn’t stay around long. 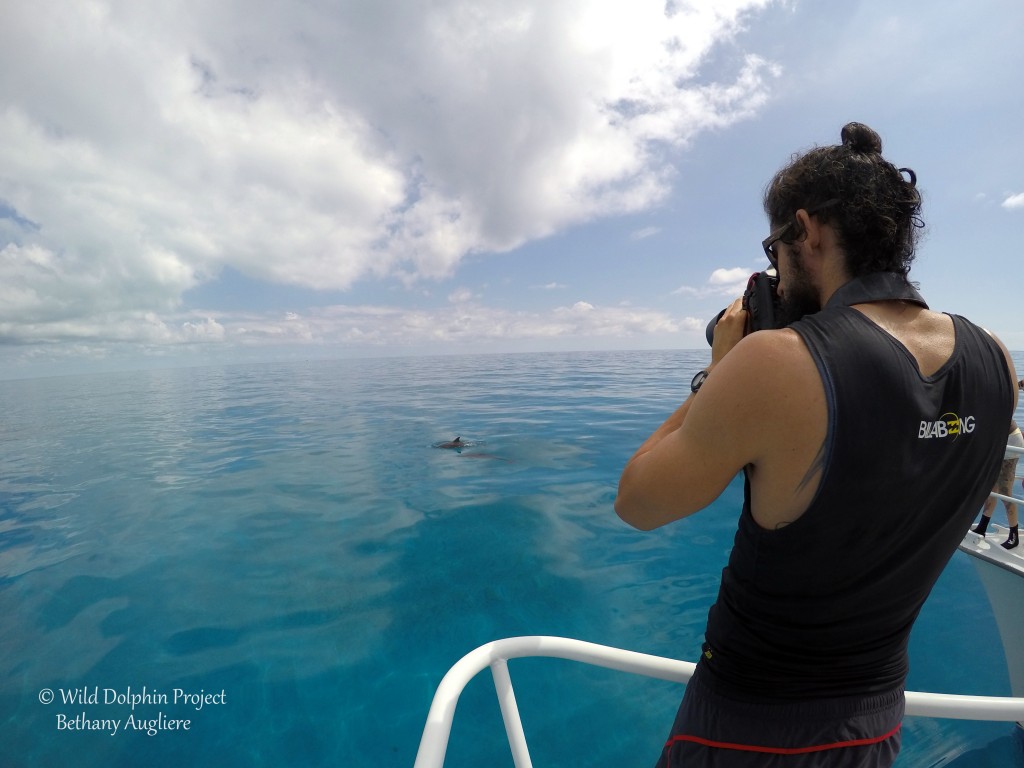 Graduate Student, Nate Skrzypczak, takes surface shots of bottlenose dolphins for photo-identification. The ideal angle of a dorsal fin photo-ID shot is parallel to the photographer. 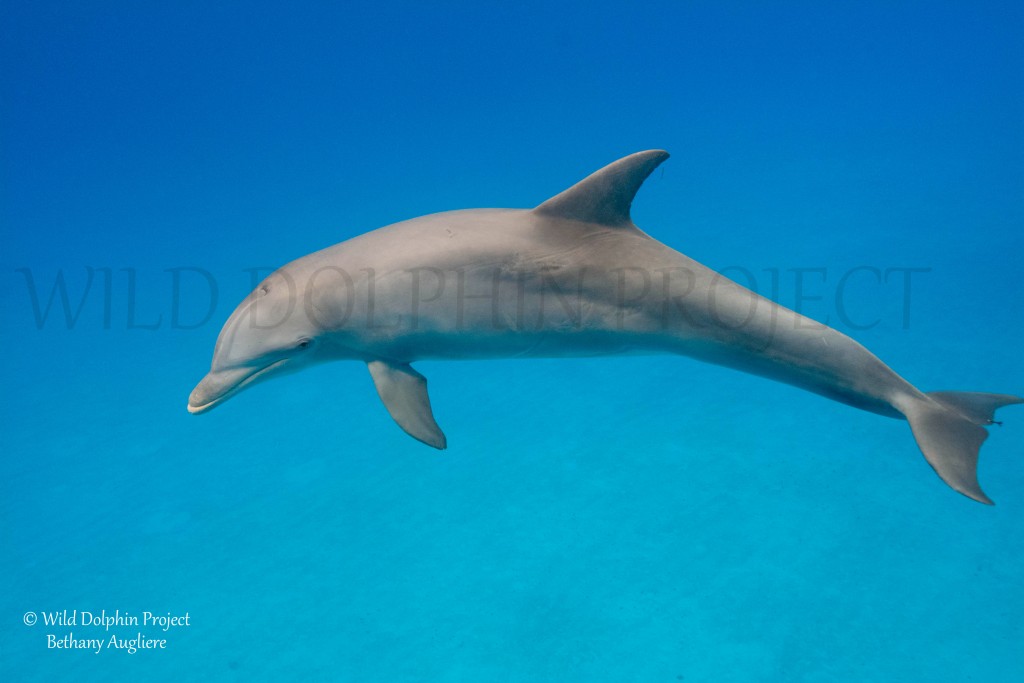 In between searching for spotted dolphins we took snorkel breaks at our favorite locations. The Sugar Wreck is an old sailing ship that sank while carrying sugar cane from the Caribbean. It is covered with reef fish, stingrays, moray eels, and coral. There is a resident hawksbill sea turtle  (Eretmochelys imbricata) that likes to hang out on the wreck while eating sponges. These turtles are considered critically endangered by the IUCN, mostly due to human impacts including the harvest of their shells. Three large lemon sharks (Negaprion brevirostris) cruised by on the bottom of the wreck as well.  Later in the trip we took snorkel break at Wood Cay, known for its sea fan garden and elkhorn coral (Acropora palmata)! Elkhorn coral used to be one of the most abundant species of coral in the Caribbean and Florida keys, however threats like coral bleaching and disease have reduced their population by up to 90-95% since the 1980s. In 2006 elkhorn coral was placed on the Endangered Species list. Seeing sharks, turtles, and coral in the wild was a first for many of our interns on board! 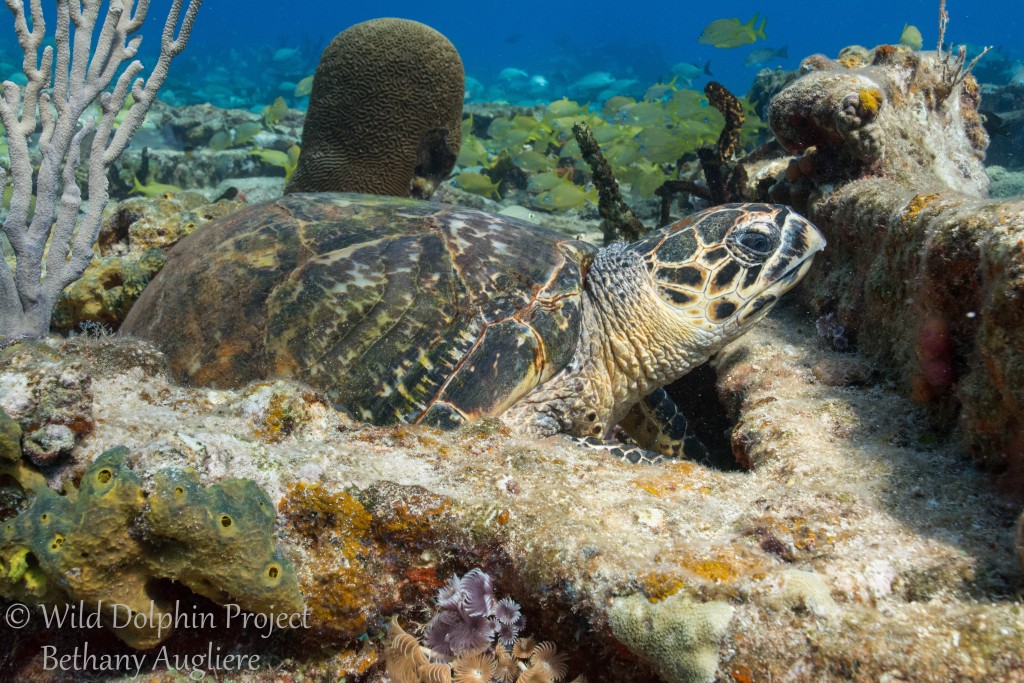 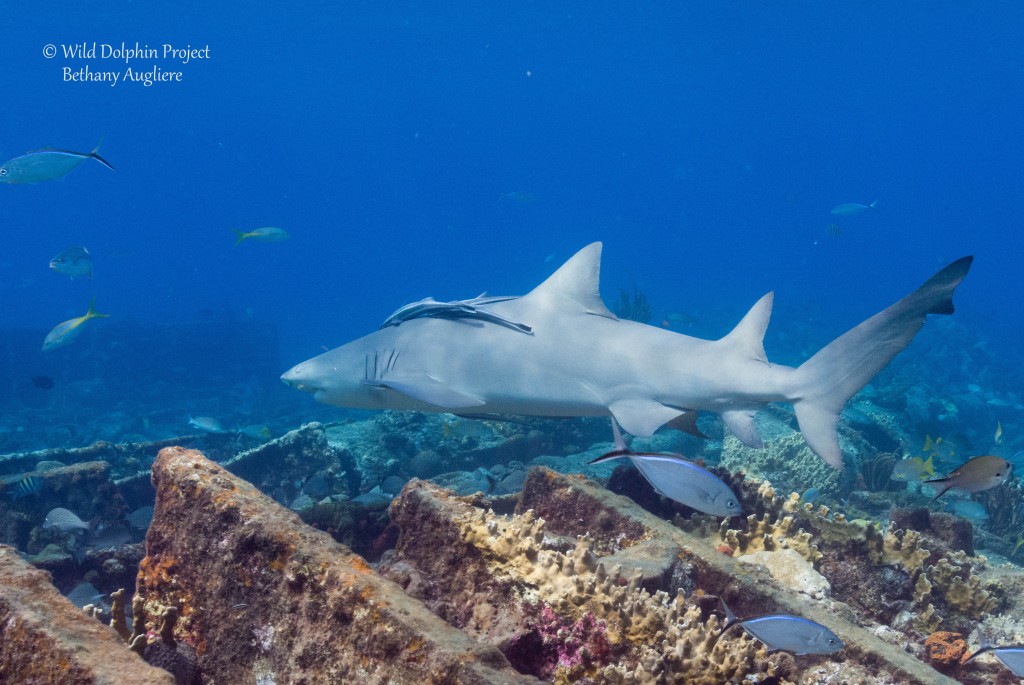 Lemon sharks are common in the Bahamas, and can reach up to 10ft. The shallow mangrove habitat of the Bahamas are nurseries for baby lemon sharks.

We searched and searched, driving around the sandbank. “DOLPHINS!” Renee, on Dolphin Watch, shouted. Finally! We found some Atlantic spotted dolphins who came leaping into the bow. We hadn’t seen each other since last September. Who were these dolphins? We stomped on the bridge let everyone inside known we had found something. The group rushed to the bow to catch a glimpse of the bow-riding dolphins. It was a group of 8, 3 moms with calves and two juveniles. Team B geared up on the back deck, as Team A stayed on deck to keep an eye on the dolphins and  log data. Our captain shouted “Clear!” and Brad, the first mate, opened up the gate. I slipped in, followed by Nate, and the rest of Team B.  The glassy conditions were no more, and we were in washing machine seas, around 2-4 ft. 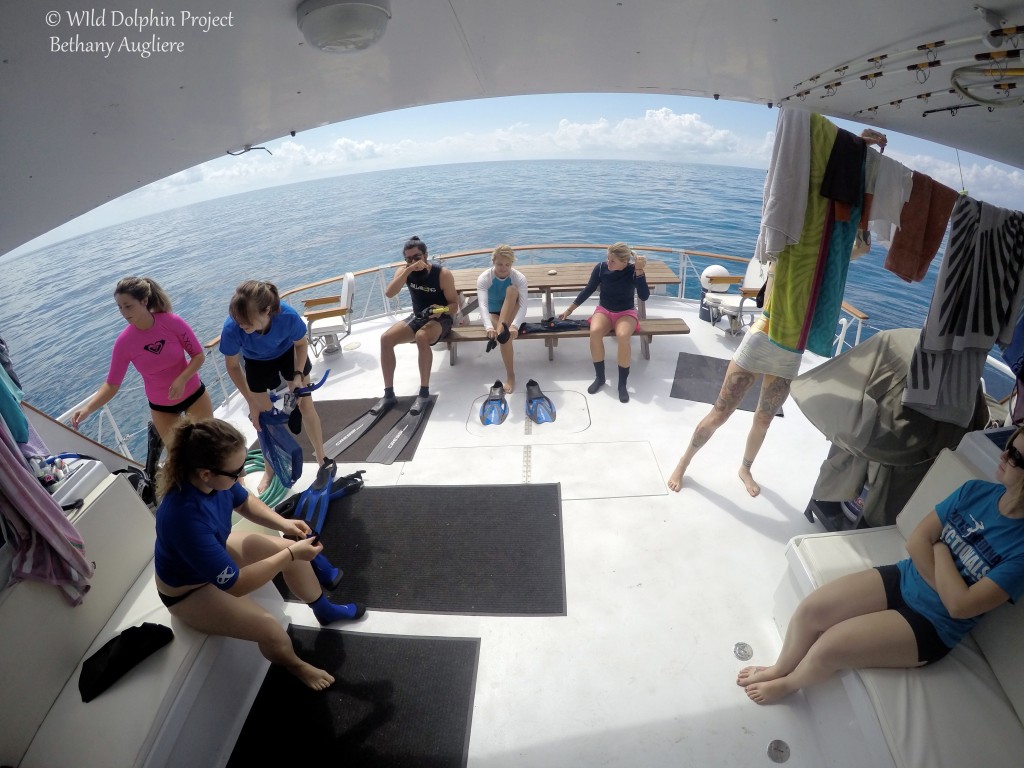 Group gearing up to get in the water 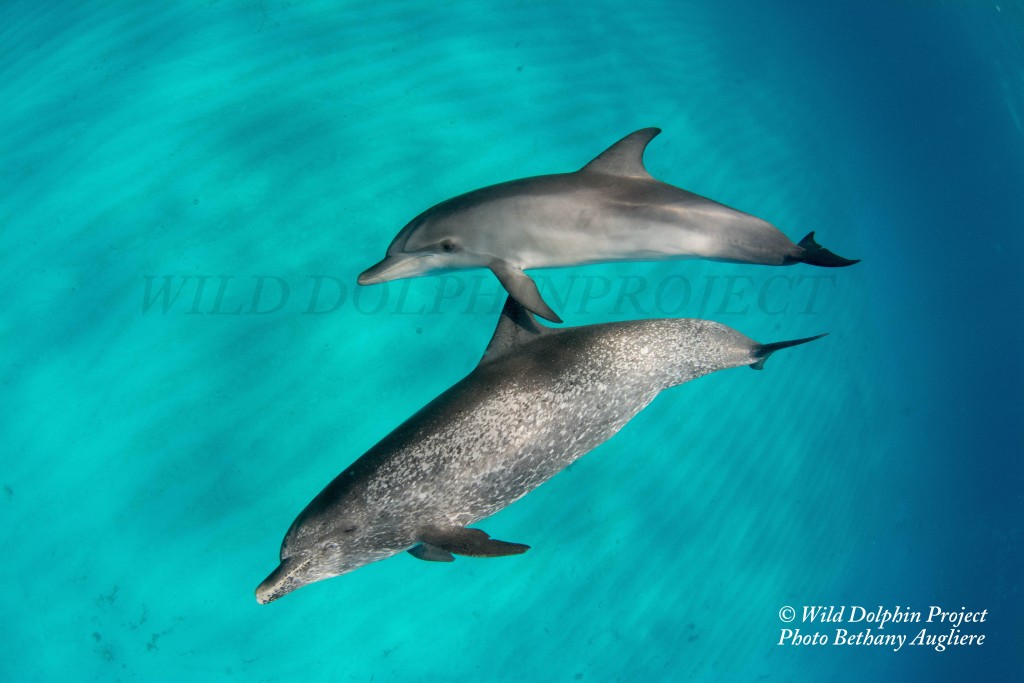 Venus, an older female, swims with her 2-year-old calf, Venti. Venus is a grandmother, and is one of the most reproductively successful females in the community.

Venus came over with her 2 year old calf, Venti. We also saw Naia with her calf Nori and Summer. We didn’t see Summer last year but she had a new calf with her!  I stayed close to Summer hoping to get a closer look at her calf to determine the sex. Both male and female dolphins have a genital slit. If the animal is a female, there is a genital slit with two smaller mammary slits on the side, which can even be seen in calves. Unfortuntaley, I didn’t get a chance to determine the sex of the calf – next time! If possible, we also try to collect a fecal sample on new calves which will be later used to determine paternity (the father.) We watched Venus and group. They were calm, milling at the surface with no apparent struggle in the swell, unlike us humans. Before the group effortlessly took off, leaving us behind, a few bottlenose swam by. 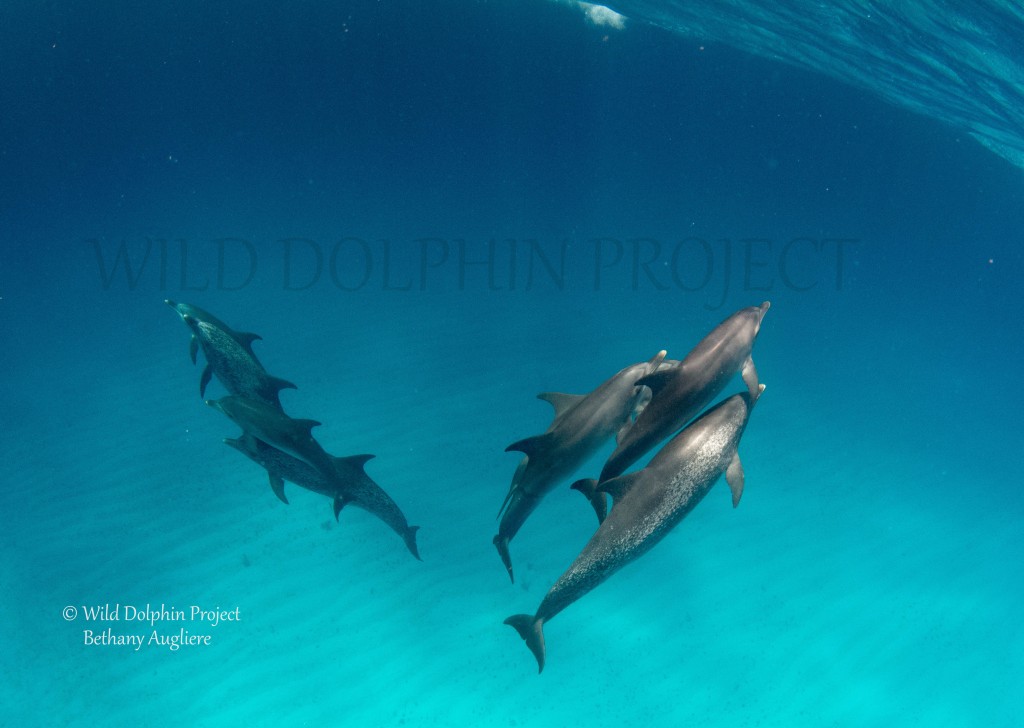 A group of 8 Atlantic spotted dolphins in the Bahamas 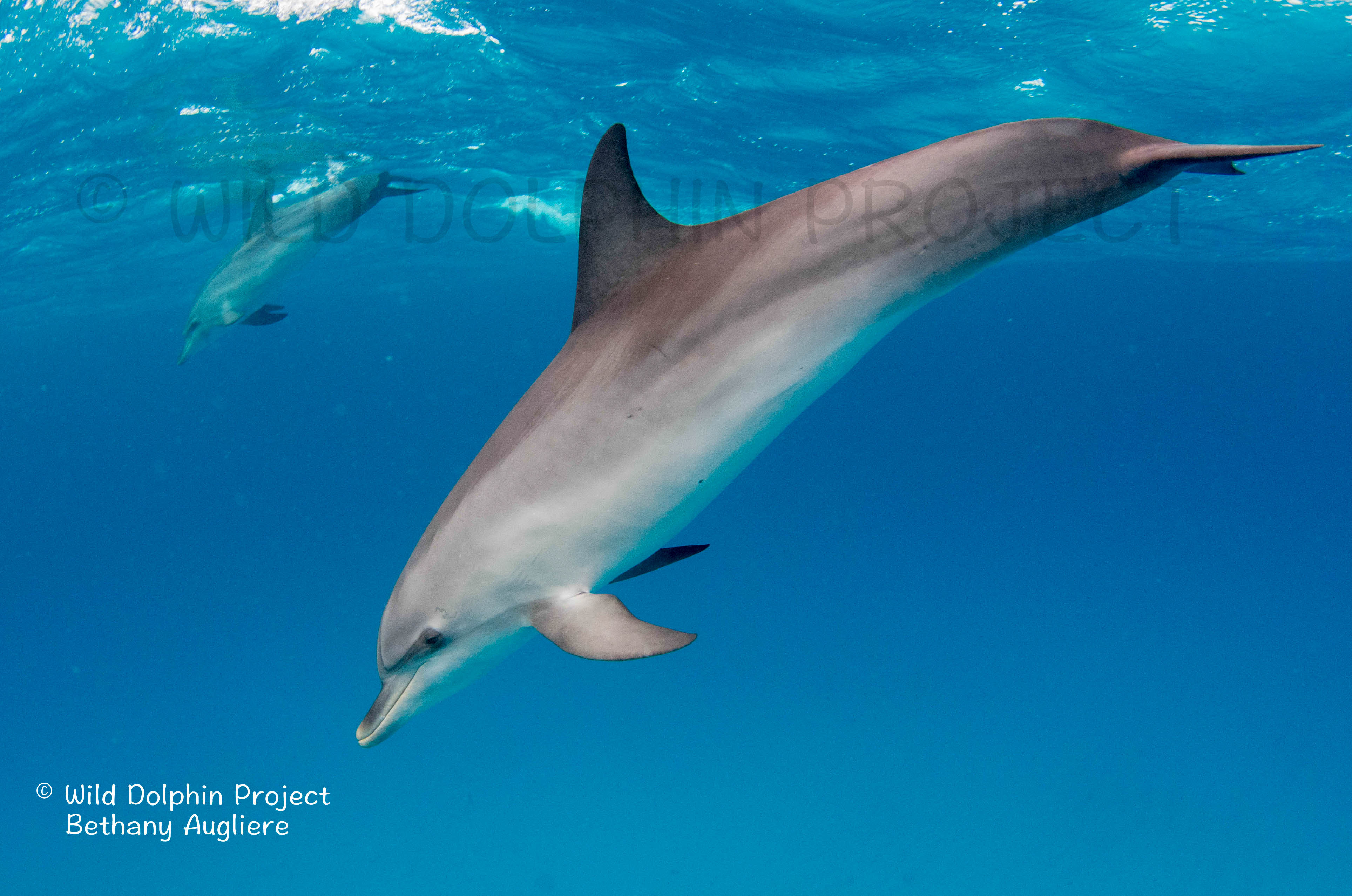 Iris, no longer a calf (twotone), has earned some small spots and become more independent from her mother this year.

We didn’t see many dolphins on our first official trip of the season, but are off to a good start-  new calves, familiar moms, turtles, and good weather. We had a great group of interns and hope they all stay in touch! Stay tuned as we update you throughout the season! 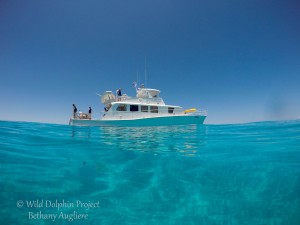 R/V Stenella in the Bahamas