I lived aboard the Research Vessel Stenella as an intern with the Wild Dolphin Project for the first trip of the 2018 field season. We embarked from the New Port Cove Marine Center in Palm Beach, Florida and set out for our anchor point in Bahamian waters. As we crossed the Gulf Stream, removed from the sight of land, I saw hundreds of flying fish sailing across the surface of the water. Once we checked in to customs, Dr. Herzing, Captain Brad, and the Research Assistant, Cassie, wasted no time in briefing us on safety and protocol for life on the boat, environmental data collection, and dolphin etiquette in the water. We were assigned a few hours of “dolphin watch” each day, and interns were placed on teams for dolphin encounters. 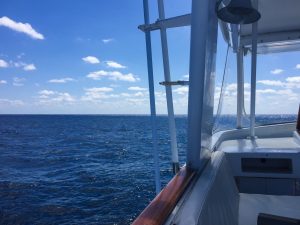 The following day, while two divers deployed a passive acoustic monitoring device on Little Bahama Bank, we had our first of many dolphin sightings. With fins and masks ready, we slipped into the electric blue water, observing and photographing Atlantic Spotted Dolphins. I was surprised by the curiosity, natural behaviors, and frequent vocalizations displayed by this wild population of dolphins in the presence of humans. They moved with such fluidity and speed in the water that it was difficult to take it all in. I was grateful for Cassie’s underwater video footage, which we watched in the galley at night, documenting individual dolphins, behaviors, and unique vocalizations. 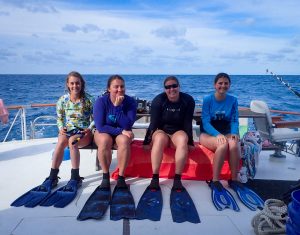 Smiling and ready for an encounter with fins, masks, cameras, and fecal sample collection belt

Guided by the expertise of the captain, mate, and researchers, along with a little bit of luck, we had dolphin encounters each day. When my team was not in the water, I took surface photographs of dorsal fins to be used for identification of both Spotted and Bottlenose dolphins. In the evenings, we would pour through the ID binders to find which dolphins we had seen that day, adding to the census that has been running for over thirty years. The first trip of the season was an exciting one, seeing pregnant and lactating females, along with new two-tone calves. 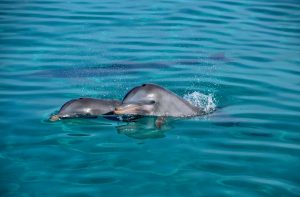 Bottlenose at the surface 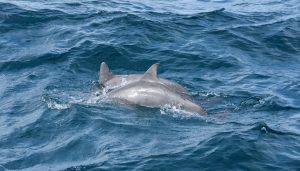 The remainder of the trip flew by as we continued to watch for dolphins, record them in the water, collect fecal samples, identify photographs, enter encounter data, record video logs, and snorkel on lunch breaks. With so much to see and learn, there was never a dull moment on the Stenella. My favorite part was the wide variety of dolphin behavior we observed from the surface and underwater, such as bow riding, parenting, synchrony, pectoral rubs, courtship, seaweed play, and other social interactions. I was humbled to be welcomed in to this world of marine research, studying dolphins in their world, on their terms. 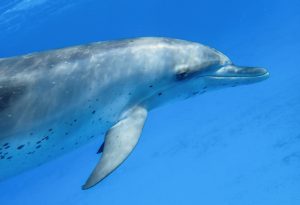 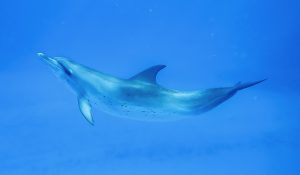 Fluidity of movement in an underwater world

Although I had only planned to intern on Trip 1, I ended up coming back for Trips 4, 5, and 9. Living on the boat for about forty days this summer, I felt immersed in field work and life at sea. I experienced clear, calm days with hours of dolphin encounters, along with rough days where we stayed at anchor in the shelter of an island. On the last day of the field season, which also happened to be Dr. Herzing’s birthday, we had the most amazing encounter with two speckled male dolphins, Jammin and Monkey. They approached our boat and stayed with us for three hours. Swimming three and a half miles together, through patches of floating seaweed and swarms of moon jellyfish, everyone on the boat had a chance to get in the water to observe as they played, rubbed pectoral fins, and engaged in a seaweed keep-away game. One of my favorite parts was capturing the dolphins on film and diving down with seaweed as the dolphins followed to catch it in their mouths and continue the game. It felt like the perfect end to a productive field season. 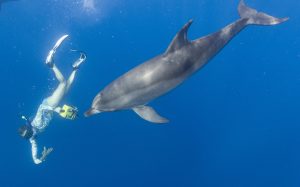 On the last day of the season, Jammin dives with me as I engage in a seaweed keep-away game, video camera in tow (photo taken by Hussain Aga Khan) 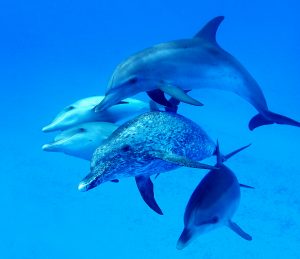 My favorite photo of the summer, a multi-aged group swimming in synchrony as they come to check out the human, featuring Nassau’s beautiful mottled spotting pattern

I knew that interning with the Wild Dolphin Project would be unforgettable, but I was astounded by breadth of beautiful moments I experienced in such a short time. Studying the dolphins in their underwater world affirmed my desire to pursue graduate studies in marine biology and behavioral ecology, while the ocean-loving people on board exemplified the importance of teamwork and diligence in the field. I have nothing but gratitude and praise for the hard work and dedication of both crew and passengers, who were always willing to share their knowledge and laughter. Although it just ended, I cannot wait for next May and the start of the 2019 field season. 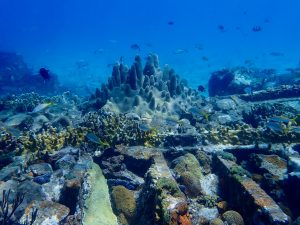 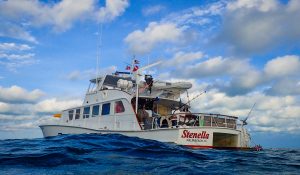 Our floating home, the Stenella, at anchor as we snorkeled during a lunch break

Your ticket for the: 2018: An Intern’s Perspective